In every vacation – especially with our road trips – we have some kind of mishap, catastrophe, or major stressor.  For our Canadian road trip, it was the Montreal leg of our trip that went almost entirely pear-shaped.  I had so many possibilities researched for our time in Montreal, so many potential plans, but if those plans were all neatly packed into a box then our time in the city was like the bottom falling out of that box as soon as it was lifted up.

It all started with the accommodation, which had been booked with a company we had never used before and shall definitely never use again.  It was a hotel without a concierge so the idea was we had to phone 24 hours before check-in to be given all manner of instructions and access codes.  This should have been simple enough but they did not answer the phone, no matter how many calls we placed and messages we left.  I will spare you the details of the saga but just know that the uncertainty was very stressful to manage and gave me sustained elevated anxiety.  My husband and I used to wing it when travelling in the past because finding one room for two people at last minute was rarely problematic but finding accommodation for six people is a challenge even when planning in advance and definitely cannot be managed on spec without a whole barrel more stress.  Ultimately, at very nearly the last minute, the company finally picked up the phone, provided the codes, and we could access the accommodation.  All we had time left to do that first evening, however, was have a brief explore of the area nearby.  It was a frustrating start. 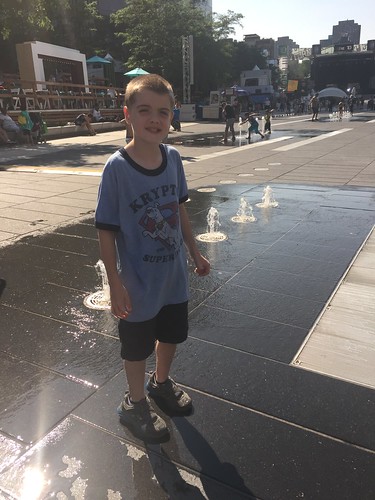 The first proper thing we did in Montreal, therefore, was to ascend Mount Royal.  This is the volcanic hill that gives the city its name.  Neither Mr Pict or I had visited it during our previous visit to Montreal so we were keen to see it and the spectacular views over the city that were promised.  We set off from our apartment in the morning and were soon hiking up the trails, through the trees, to get to the summit.  And, just as we really started ascending, the skies opened and we were drenched by a deluge.  We sheltered beneath the tree canopy in the hopes it would quickly pass over.  Rain had not been predicted for the morning after all.  However, it did not pass.  It actually just got worse.  By this point we were soaked to the skin anyway, and at least it was warm, so we decided we would keep plunging onwards and upwards.  We emerged from the woodland trail onto the belvedere dripping, squelchy, and looking like forest trolls.  But at least it would all be worth it for the fabulous views, right?  Yeah, not so much.  We could definitely see an expanse of the city below us but it really wasn’t that enthralling a view.  Maybe it was the haze from the intense humidity obscuring the detail and maybe (probably) it was our soggy moods but we were all entirely underwhelmed.  Well, Mr Pict and I were merely underwhelmed; our sons were incandescent, feeling like they had been duped by us, and starting to foment a rebellion against committing to any of our other plans for Montreal.  Oh dear. 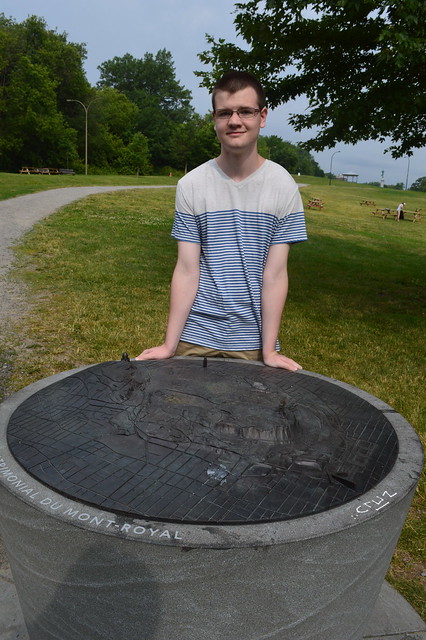 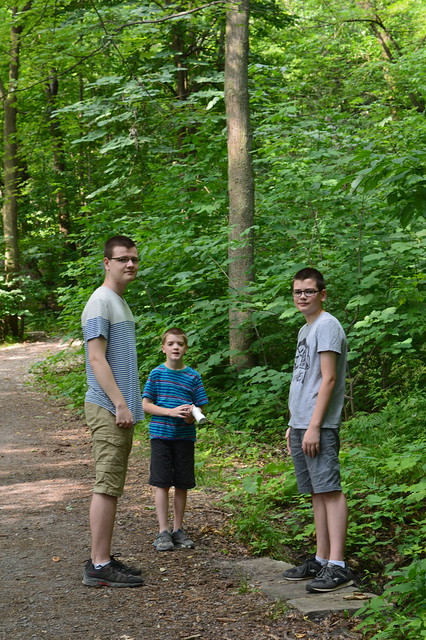 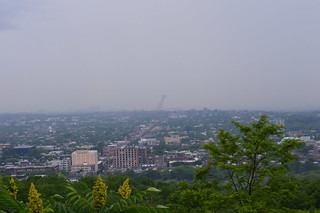 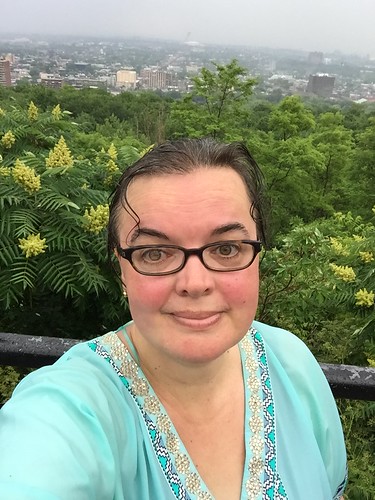 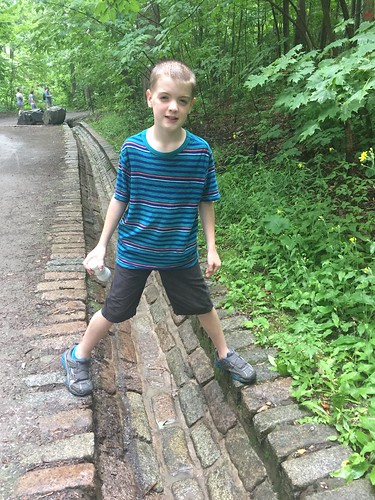 We squelched and dripped our way back down the hill and towards the neighbourhood we were staying in.  Most of us were going to require a change of clothes before we could even countenance doing anything else.  Our apartment was in a district that was kind of hipster and trendy, definitely in the category of an up and coming area rather than fully gentrified, and we had learned that it was fun to explore it by daylight, when it had a really great vibe, but we didn’t really want to have the kids out after dark.  Anyway, our walk back to the apartment from Mount Royal took us through a neighbourhood where the gable ends of buildings and other walls were decorated in wonderful murals.  Apparently urban artists are invited to paint the walls in the neighbourhood every summer and the quality of their art is really fabulous.  The kids and I really enjoyed viewing them and treated the streets like an outdoor art gallery. 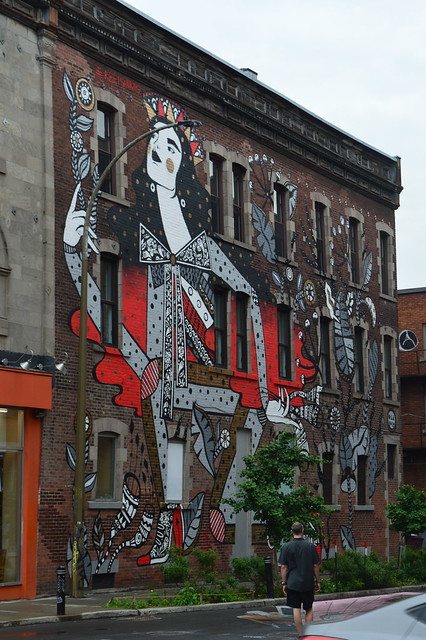 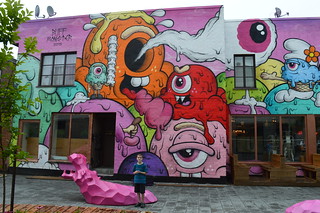 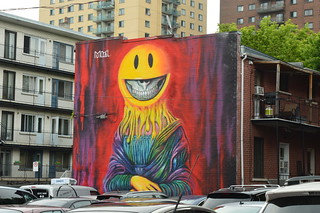 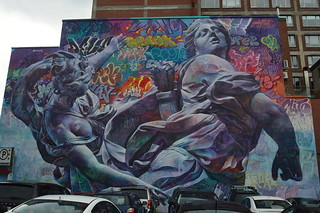 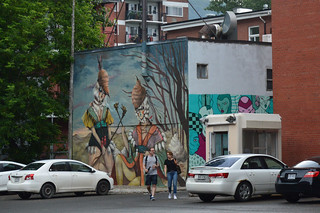 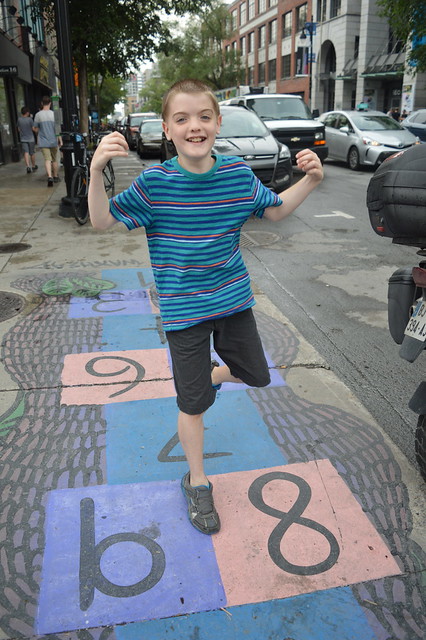 Returning to the apartment to dry out and change clothes was useful on a practical level but it was also a mistake.  Once the kids were back inside those four walls, they mounted a bit of an insurrection about going back out.  Our bad start to exploring Montreal had eaten away at their enthusiasm and they were bottomed out.  Plus they are teen and tween boys so any opportunity to rebel and rail against parental dictats is going to be seized upon.  I sometimes have to remind myself that life was not in fact easier when they were all small enough to be strapped into a buggy or carrier.  I also have to remind myself that I have trained them to voice their own opinions and to debate.  I created these rebellious monsters!

We compelled them to go back out again with the promise of lunch.  Once they had been fed, however, I revealed that we would be using what remained of the afternoon to do something constructive.  Of course they whined and grumbled but I was past caring at this point.  As we are fond of reminding our precious children, while we normally parent in a democratic style, sometimes we have to be dictators.  You can imagine how well that went down. 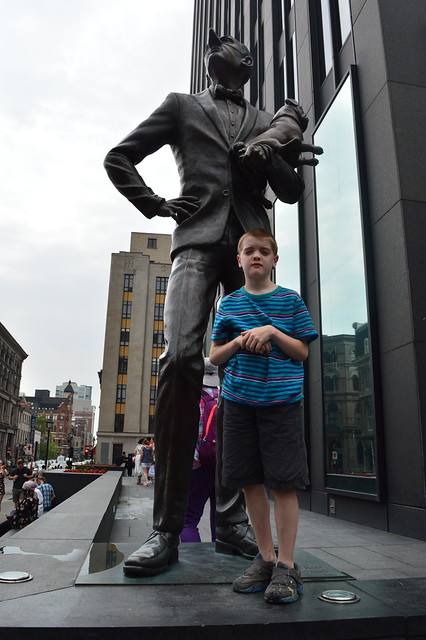 My most vivid memory of my previous visit to Montreal was of visiting Notre Dame Basilica (yup, same name was the one in Quebec) because I had been bowled over by its interior decoration.  I decided that was what we would do so we tramped over to the old city.  The queue for admission ran all the way down the street – cue much griping – but it was also fairly fast moving.  We were inside in under forty minutes.  The kids elected to soak up the atmosphere and aesthetics (and air conditioning) from a pew so I just abandoned them there while I wandered around the basilica and studied the details of the carvings, the stained glass, and the paintwork.  It was the latter that had left that lasting impression with me.  The vaulted ceiling is painted a rich blue that is then spattered with gilded stars.  The main altar is also mainly an azure blue colour but with patterns picked out in red and purple as well as gold.  It’s like an exquisite box of luxurious jewellery.  It’s lavish and stunning and a bit of an extravagant confection but I think historic ecclesiastical architecture can pull such excess off.  I even got to hear the 19th Century organ being warmed up and played briefly which was fantastic.  The kids remained unmoved and unimpressed. 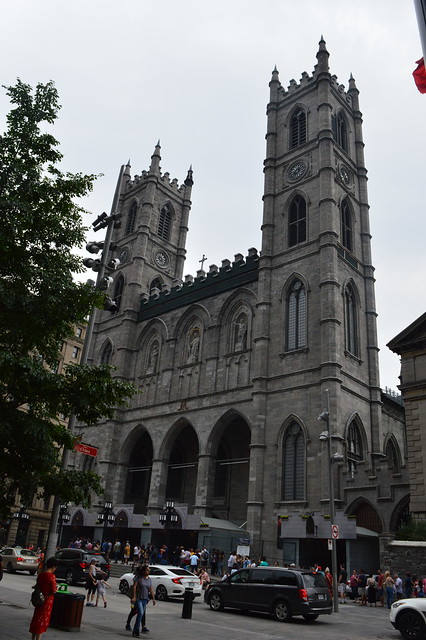 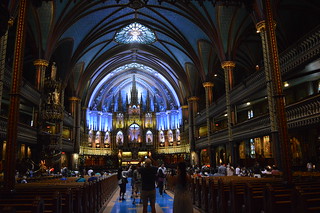 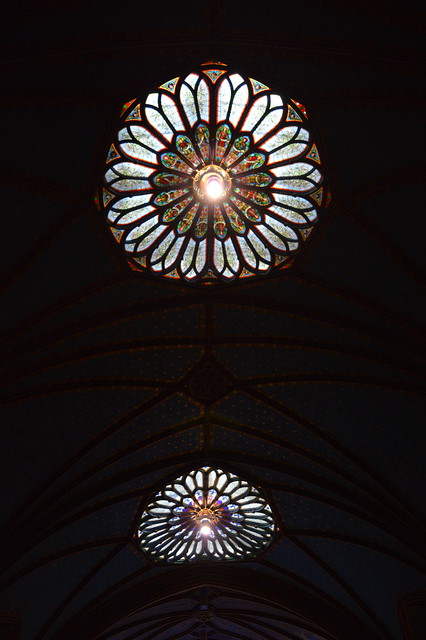 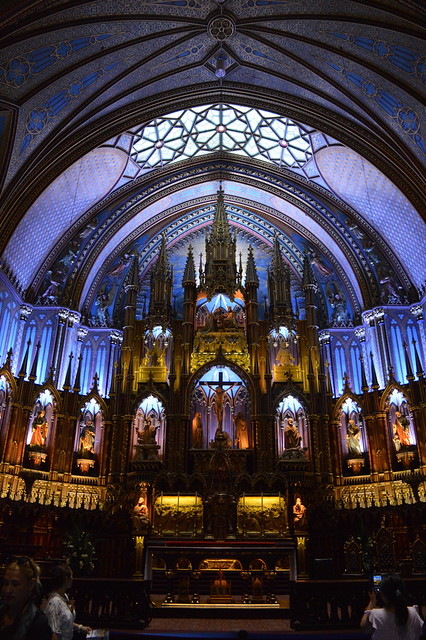 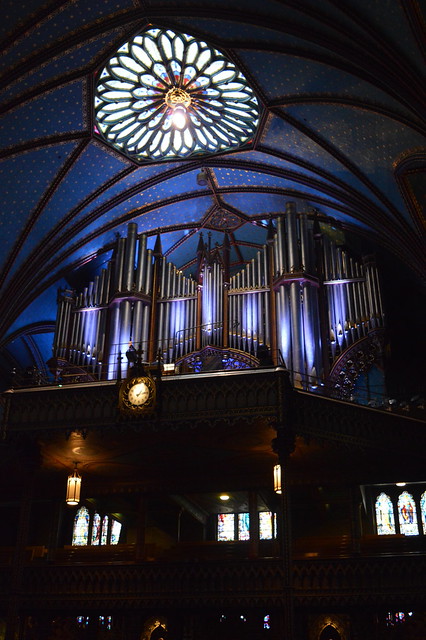 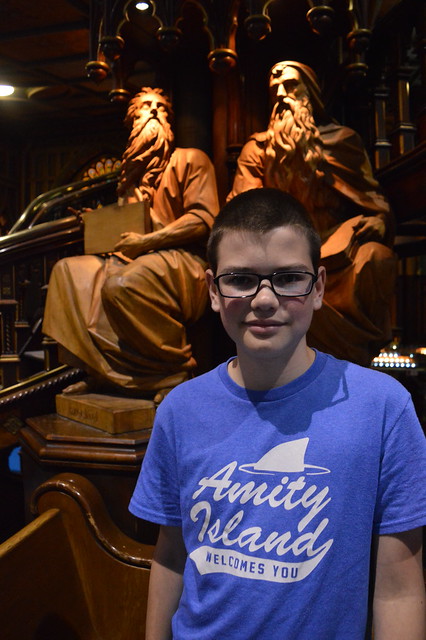 After a bit more wandering around the old city and its port, we gave up.  We strolled back to our own neighbourhood, grabbed some ingredients for our evening meal from a grocery store, and returned to our apartment, and I packed up so we could set off for the next leg of our trip.  So our time in Montreal was a bit of a damp squib all in all.  My memories from my 2001 Canadian road trip had left me with the impression that Quebec was a much more appealing tourist destination but that Montreal was a much more practical city and my visits this time had just served to shore up that opinion.  While our visit to Montreal as tourists had been beset by problems – some of our own making and some not – I could definitely imagine it being a great place to live and work; meanwhile, Quebec was a wonderful city to visit as a tourist but I think living there could be a bit more challenging.  In any case, we were done with cities now.  Now it was time for a change of pace.