This week’s Art Journal Adventure prompt was “goddesses or monsters”.  As long term readers of my blog will know, I love mythology and especially Greek mythology.  I was, therefore, overwhelmed by the possibilities and suffered from a creatively crippling bout of indecision.  In the end, however, I decided to whip up a quick ink and watercolour illustration of a Minotaur.  The Minotaur is one of my favourite monsters and I had not drawn one for a while.  This one echoes the body shape and proportions of one I painted in an altered book three years ago.  I placed him on a grey background and used a more muted palette so suggest his labyrinth dwelling.  I kept second guessing myself as I am usually a bit more bold with my use of colour.  However, I am calling this illustration done. 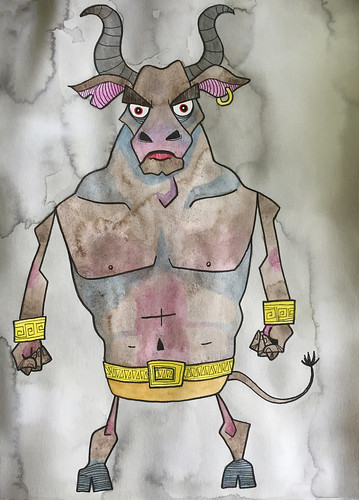 Ariadne was the daughter of King Minos of Crete and his wife Pasiphae.  Pasiphae was also the mother of the Minotaur which means wee Ariadne had a very interesting half-brother.  I bet he helped keep those teenage boys at bay when they were pestering Ariadne in Cretan High School.

Ariadne was in charge of the labyrinth and oversaw the sacrifice of Athenian youths to her ravenous, raging sibling so she must have had some mettle to her.  However, when the hero Theseus turned up, Ariadne turned to mush in an instant and assisted her crush by gifting him a sword and a ball of thread with which to find his way around the labyrinth and kill the Minotaur.  Mission accomplished, Theseus then took Ariadne away with him, as he had promised to do, but then dumped her on Naxos.  There, Dionysus discovered her and married her so she did get her happily ever after in the end.  Complete with never-ending wine.

I decided that Ariadne had to be naïve in order to fall for Theseus’ charms so readily and perhaps also lacking in self-esteem given that she was willing to leave her family behind and have her bull-brother killed by the hero just because he made her swoon and festooned her with promises of love and bliss.  I, therefore, chose to depict her as being young with rosy apple cheeks suggesting the first flush of infatuation with dashingly treacherous Theseus.  She holds a skein of thread in her hand which I drew in silver ink to connote its magical, GPS qualities.  I then – in a rush with my drawing – made a terrible error and momentarily conflated Ariadne with Arachne, who was turned into a spider by Athena.  I had drawn the spider on her headband and web on her necklace in ink before I realized the error of my ways.  Oops.  Draw in haste, repent at leisure.

It’s the second day of my Drawing a Day challenge and this is my second monster.  Hmmmm.  My boys definitely like the mythological monsters.  Yesterday was the Chimera and today is the Minotaur.

Americans pronounce the word Minotaur as Minn-ah-Tar, which I find quite discombobulating since we pronounce it Mine-Oh-Torr.  As another aside, my youngest sister looked a bit like a minotaur when she was born.  It was the snouty nose and the nostrils like the barrel of a shotgun that did it.  My mother, of course, was oblivious to this fact and thought she was nothing other than perfectly adorable.  Now as a mother myself, I know this to be the effect of a whole load of hormones, post-delivery endorphins and maternal love.  As a 14 year old, I just thought my Mum was demented.  And in need of an eye test.  Yes, my new baby sister was cute.  But she was cute in a peculiar way and she definitely had the look of a baby minotaur about her.  Thankfully her face evolved fairly quickly and she became a regular version of cute.

The Minotaur was a ferocious creature, half-human and half-bull, who roamed the labyrinth designed by Daedalus for King Minos of Crete.  The myth tells that King Minos was to slaughter the Cretan Bull in order to honour Poseidon.  However, Minos decided to keep the bull for himself so, as punishment, Poseidon made Minos’ wife Pasiphae fall in love with the bull.  That relationship produced the Minotaur.  Suffice to say, I was not even remotely tempted to draw that bit of the story.  I rather imagine that the baby Minotaur was not unlike a human toddler, all tantrums and demands, but then he got older and started devouring people.  That behaviour obviously required some stern disciplining so Daedalus was commissioned to construct the labyrinth and the Minotaur was imprisoned in it as some elaborate “time out”.  When Minos went to war against the Athenians and won, he found himself a regular supply of Minotaur meals.  He demanded a tribute of seven young men and seven young women be supplied by Athens every year and these youths were chucked into the labyrinth to keep the Minotaur occupied and fed.  This went on for a few years until the hero Theseus, given a nifty tip by Ariadne, managed to defeat the Minotaur.

Mr Pict and I, along with our oldest son, went on a vacation to Crete back in 2004 and we soon noticed, as we visited several archaeological sites and museums, that the Minoans were completely obsessed with bulls.  They had a sport that involved jumping over a bull, there were libation vessels (oh so very many libation jugs) that depicted bulls or were in the shape of bulls, and there were wall paintings galore of bulls.  I think that probably settled where the myth of the Minotaur sprang from.

My kids are big fans of the ‘Percy Jackson’ series of books by Rick Riordan and – at the risk of a tiny spoiler – a Minotaur turns up early on in the first book in the series.  So that became the Minotaur that inspired my drawing: confrontational, pugilistic, raging with anger and physically strong.  I’ve drawn him with a snarling facial expression and brow furrowed with anger and concentration.  I tried to create a pose that looked as if he was getting ready to attack.  My nod to the Athenian tribute is the skull on his belt that is – thankfully – holding his loincloth up.

A couple of details from the finished drawing

So that, folks, is my version of the Minotaur.  I am happy to report that he looks nothing like my youngest sister.