Is that the distant sound of Gustav Klimt spinning in his grave?

When I saw the Art Journal Adventure prompt of “Silence is Golden”, a nudge to use metallics, I immediately thought that a Klimt homage was in order.  He is one of my favourite artists because of the way he combines influences like psychology and mythology, blending the contemporary with the classical, juxtaposing the human form with bold areas of shape and pattern.  He’s a pretty inspirational artist and I like to dip into aspects of his style with my own illustrations from time to time.

I like the effect of metallic paints but I do find them tricky to work with.  I had to build up several thinner layers of bronze and gold before it looked smooth and not brushstroke-patchy.  The sheen of the metallic paint also makes it a bit tricky to get subsequent layers to behave well on top of the base layer.  I let the layer where I was building up the larger shapes of pattern get a bit sloppy as a result.  Klimt would not have approved, I’m sure.  I could have been more meticulous by taking my time but that didn’t happen.  Often in my art journal I start with a head and face and work outwards from there but this time the head and face were blanks until I had played around with all the patterns, though I had pencilled in the lozenge shape of the hair in advance as a frame to the face. 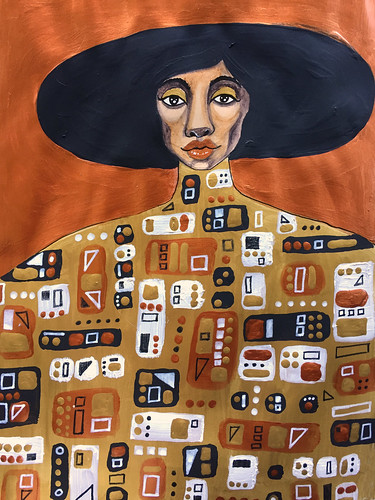 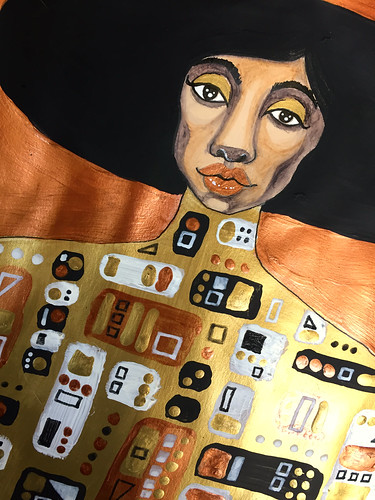 For this week’s Life Book lesson, the tutor was Effy Wild.  The visual elements of the lesson were connected to some introspection but I mostly choose to gloss over the more art therapy aspects of Life Book and just focus on the art.  I also did not have time to view the video demonstrations so I relied on the accompanying PDF to provide me with an understanding of the steps involved.  As always, my finished outcome looks little like that of the tutor but I utilised techniques and approaches that she demonstrated.  I think the finished treeis reminiscent enough of a plump baobab tree that I wish I had thought of the resemblance sooner in the process and made it completely like a baobob.  It was at its core an exercise in patchwork collage and negative space.  I used bronze paint over the collage layer for the tree trunk and gold for the leaves so that it would glint in the light and because I look for any excuse to use metallic paints.  The tutor’s version incorporated text.  I wasn’t feeling that way inclined but do feel my piece lacks a focal point.  I just need to ruminate on it for a bit and return to it once I have an appropriate epiphany. 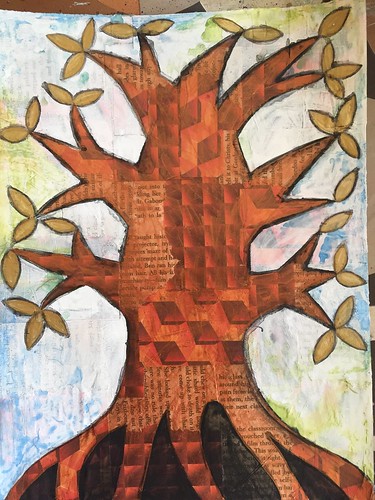 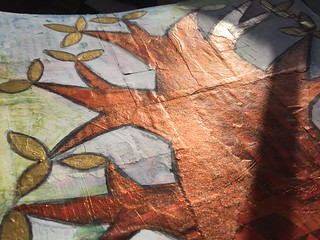 Last week’s Let’s Face It lesson was taken by Muriel Stegers.  I had to improvise a fair bit with the materials and I didn’t follow the subject of the portrait but I did paint over collage, use metallic paints, and lots of dribble which were major elements in the lesson.

I am not sure how I feel about my outcome.  I like the degree of blending in the skin tones and I like the metallic elements, especially the bronze irises.  I also like that the collage layer adds a layer of interest to the background.  However, the ear lobe is too high on the head, I think the liberal use of metallic paint might be a bit overwhelming, and I think all the dribble at the bottom of the painting detracts from the face. 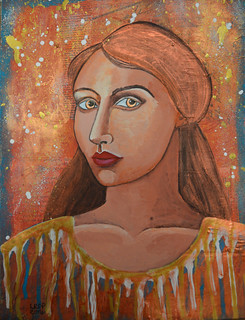 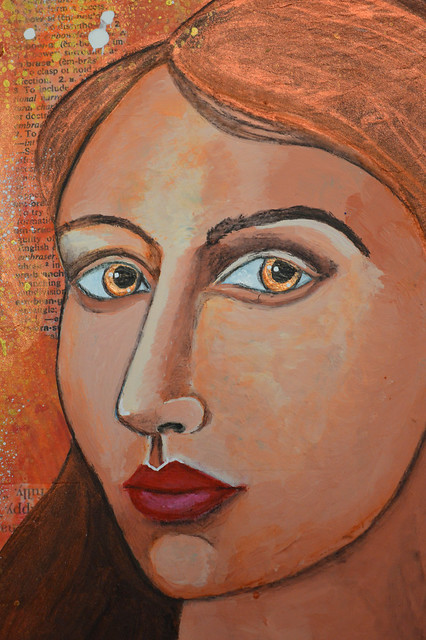 Gustav Klimt is one of my most favourite artists.  I love the way his figures emerge among swathes of shape and pattern, his use of gold and other metallics and his primary subject matter of female figures, often mythological.  We started our lesson on Klimt by looking at the images in a book I have about the artist and his work.  My boys are little magpies, always drawn to bright and shiny things, so I had assumed that Klimt would really appeal to them but they were not as taken as I thought they would be.  They found all the pattern a bit overwhelming and visually busy.  Horses for courses.

Despite not seeing the allure of Klimt’s use of gold leaf, three of the boys were keen to use metallic paints.  My 12 year old painted a penguin, with bronze bill and feet and a gold eye; my 8 year old used the word ‘gold” as his jumping off point and painted Booster Gold’s robot Skeets, from the DC comics; the 6 year old did take his inspiration directly from Klimt as he painted his version of the Tree of Life – and I think he might be my little protege with all the dots of metallic paint he added to his gold tree. 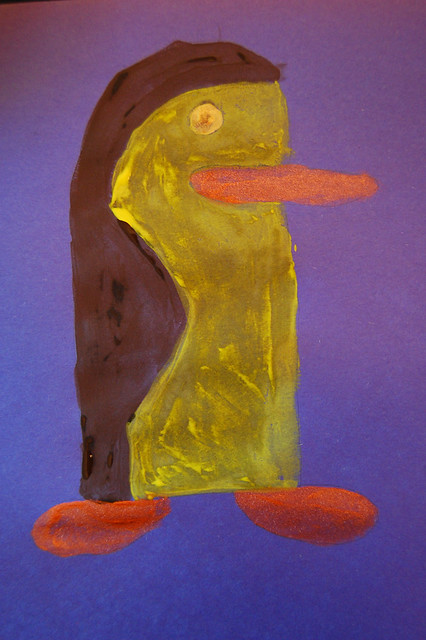 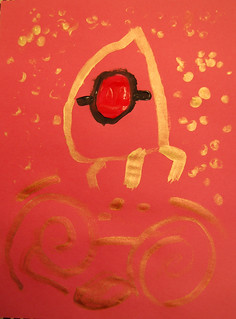 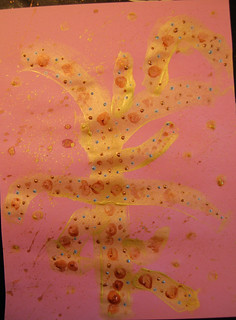 My 9 year old non-conformist, of course, had to do his own thing and resisted the temptation to paint even though he loves all things shiny.  As soon as he saw the Klimt works based on mythological and biblical stories, I knew he would focus on the narrative of the subject matter rather than any element of Klimt’s style.  He liked the works depicting Judith and Holofernes and Salome and John the Baptist so his drawing depicts a woman holding a severed head.  Nice.  He chose to scrumple up the drawing for the effect of the creases.  I am not sure why. 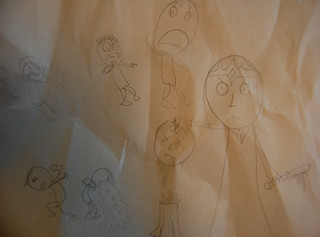 I decided to challenge myself in my painting: I have drawn full profile figures before but have not painted one, not that I recall anyway.  It does not show up in the photograph very well but the background is pearlescent yellow.  I decided to leave it as it was rather than add pattern just because I worried the face I had painted would get lost in the mix.  I am, however, pondering whether to add patterns after all.  I added simplified versions of typical Klimt patterns in the clothing of the figure and added metallic dots to the hair.  I am quite pleased with how the painting turned out and now I have overcome the challenge of painting a face in full profile. 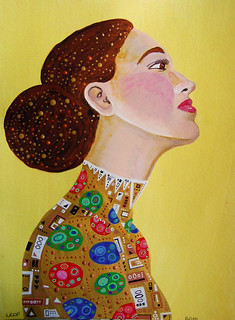 You can check out my Klimt Bunny on my art blog, Pict Ink.