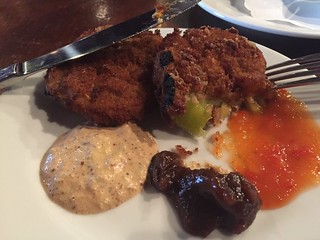 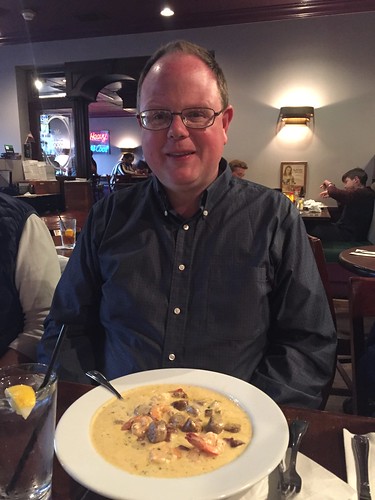 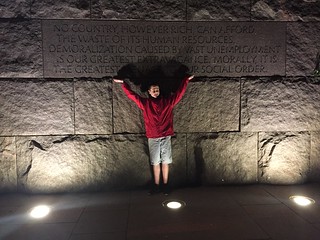 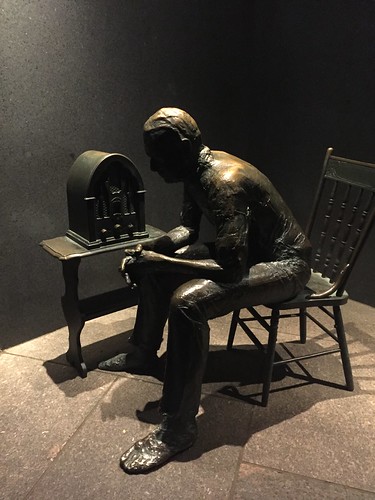 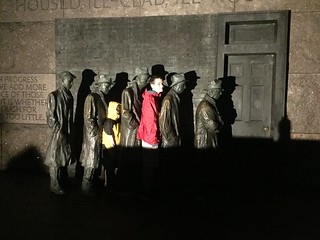 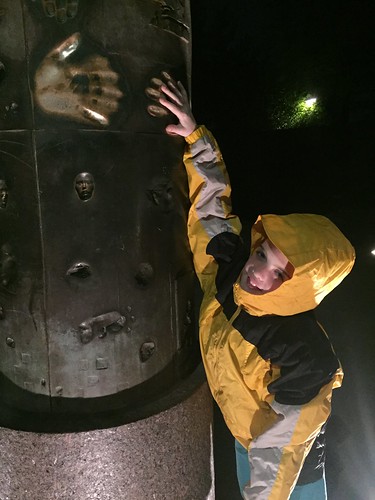 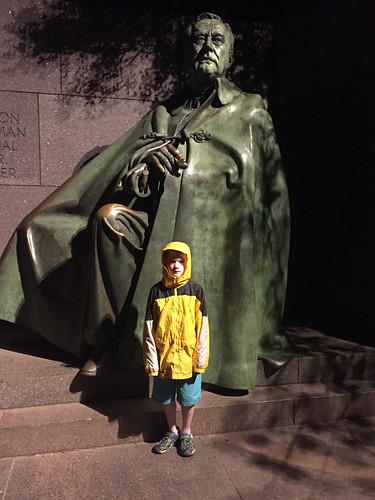 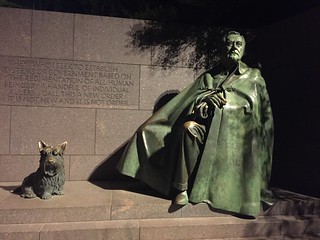 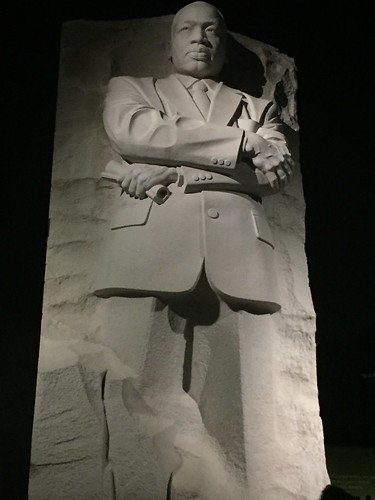 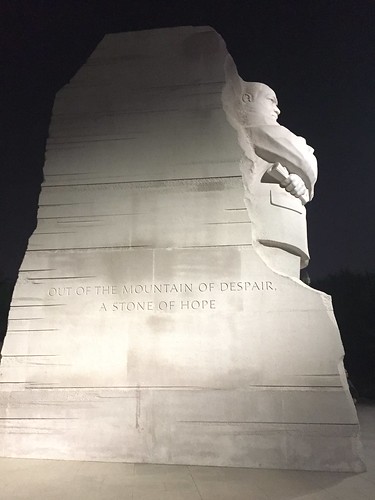 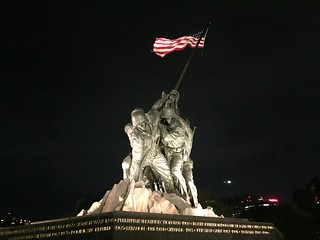 After a restful and cooling break in the hotel, we headed back out for the evening.  Our plan was to show the boys some of Washington DC’s monuments by night because they look quite different when artificially lit compared to how they appear in daylight and also because it is less busy at night and you can sometimes get a better view as a result.

After a bit of a kerfuffle that caused a delayed departure, we emerged from the metro station late enough in the evening that rats were scuttling all over the place.  From journeying on the London Underground late at night, I am familiar with seeing manky rodents on the tracks but these rats were confidently barging past travellers.  While everyone else was recoiling, my kids thought it was so cool to see such big rats.  They wanted to stay near to the metro station to study them and befriend them.  Nope.  Move on.

First stop was the Washington Monument.  It was positively glowing against the night sky. The kids had seen it during the day two years before but agreed it was quite different to see it at night.  Mr Pict and the kids lay down on the ground with their legs leaning against the Monument’s sides in order to achieve a worm’s eye view. 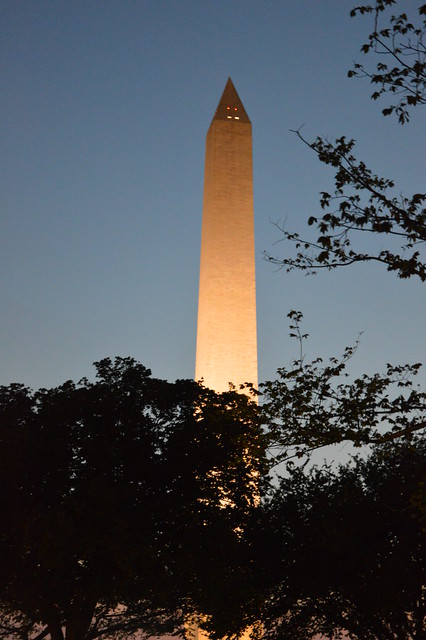 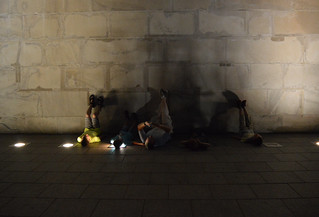 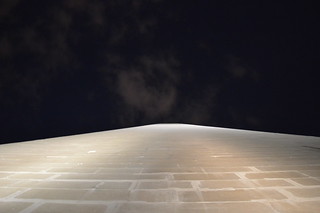 Then we tramped across the grass of the Mall, which was not the best idea actually since it was very boggy and uneven underfoot and I managed to fall into a hole.  We popped out at the National World War II Memorial, one we had also visited two years before.  It really did look different at night.  The granite pillars were somehow more assertive when lit against the night sky and the fountains seemed to sparkle and dance.  I noted on my previous visit and it was the case again on this visit that people were permitting their children to wade in the water of the Memorial and even some adults were sitting on the side with their feet dangling in the water.  While I can appreciate the temptation on a sultry, sticky evening, a Memorial to those who fought and died in the Second World War is truly not the place to cool off. 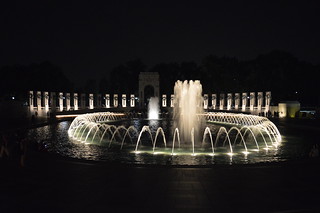 We emerged from the World War II Memorial and headed off to visit Abe Lincoln.  We were being eaten alive by mosquitoes hovering over the reflecting pool so were disgruntled as well as tired by the time we reached the steps of the Lincoln Memorial.  The littlest Pict’s energy levels were flagging so I stayed with him while the older boys trekked up the steps to see the statue, my 10 year old taking my DSLR so that he could take some photos of his favourite President looking thoughtful and wise. 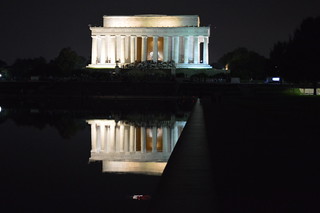 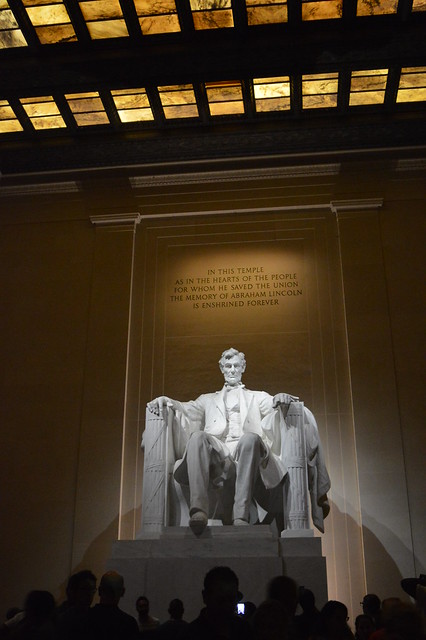 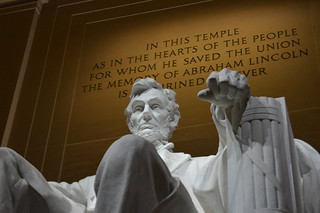 Next up and just a short stroll away was the Korean War Veterans Memorial.  This was particularly haunting to view at night.  The main feature of the Memorial is a triangle of juniper bushes containing steel statues of 19 military personnel on patrol.  Something about them being surrounded by pitch darkness, their feet being consumed by a dense carpet of foliage, their expressions alert and pensive, made the Memorial even more arresting. 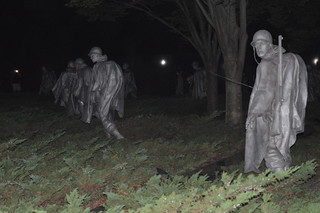 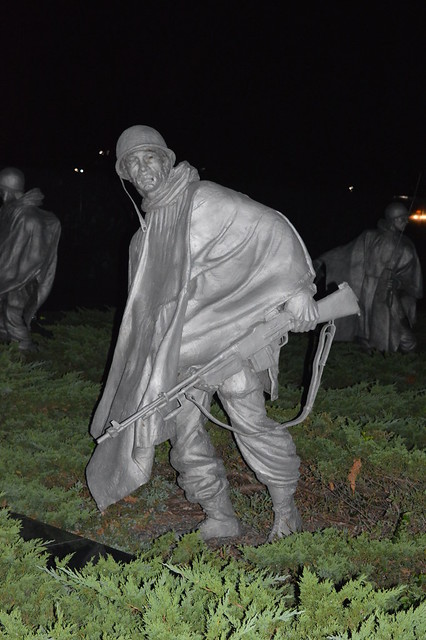 The plan had been to take the boys to see the Franklin Delano Roosevelt Memorial, which I have actually only ever visited at night, and then out to the Jefferson Memorial.  The latter was always ambitious and had been pretty much written off by the delay in embarking on our evening foray into the city centre but sadly we also had to jettison a visit to FDR because the kids were sapped of energy, the little one was half asleep and was shambling like a zombie, and we wanted to call a halt to things before they all started snarling and grumping.  We were, therefore, about to set off back to the metro station when Mr Pict suggested we get an Uber back to the hotel.  My thriftiness made me argue for a return journey on the metro but the prospect of an air conditioned car journey meant I was outvoted by all the male Picts.  I, therefore, got to experience my first ever Uber journey and experience my kids falling asleep in the car of a random stranger.