I started this art journal page on Earth Day (22 April) but did not make much headway beyond covering the page in fragments of map from an old atlas and painting a white area for the face and neck.  I was able to return to the page this weekend when I met up with some local art friends at a coffee shop.  The circumstances necessitate the use of non-messy, portable, quick-drying art supplies.  I, therefore, completed the page using Neocolor II crayons and Inktense pencils.  Because I started the page on Earth Day, this illustration is of a sort of Mother Earth figure.  I like that the text and shapes of the maps can still be seen through the layers of colour.  The beady eyed among you will be able to detect that I used mainly Scandinavia with a wee bit of the Caribbean.  I wish I had made her face more expressive but drawing while chatting is a challenge. I was productive and managed to create another illustration during the meet up but I will blog about that page tomorrow. 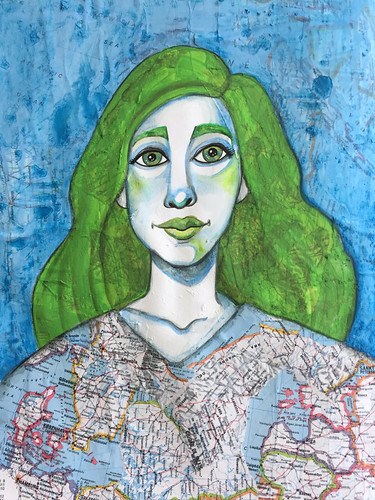 This week’s Documented Life Project prompt was to incorporate a map of “your state or the world” and document something on that map.  Luckily, a few months ago, when doing my usual poking around in thrift stores, I had purchased a world atlas for 50 cents.  I, therefore, actually had the materials I needed.  Furthermore, I immediately had an idea of what I wanted to create, a little flash of an image skimming across my mind’s eye, which was a welcome contrast to the previous few weeks when I have been scratching my head for a bit.  I decided to use the map to document the fact I am “between belonging” right now as an immigrant, ensconced as I am as a resident of America but very much still feeling my Scottishness and connection to my homeland pulling on my heart strings.

I used a template to cut out two birds from two different maps: one of Pennsylvania, with the Philadelphia area being prominent around the bird’s head; and the other of Scotland, though actually it was of most of the British isles since that land mass was small enough in the atlas to fit.  I suppose that is appropriate since I have lived in three different locations in Scotland and have also lived in England for a while.  I chose the bird shape not just because I have become a tad obsessed with birds this past year but also because they represented migration.  I created the background using gelatos.  I have a love-hate relationship with gelatos: I love their creaminess and the rich vibrancy of the pigment but I cannot seem to get them to go onto the paper as smoothly as I have seen on tutorial videos.  Instead they still have a bit of a rough scribbly quality at places in the mark-making and I have to then deploy a faithful baby wipe in order to spread the colour across the page.  I used two shades of blue and a mid-green to represent the ocean between my places and the colours on the globe.  The green was used on a practical level to outline and thus highlight the shapes I was collaging onto the page.  I then added some strips of glittery green washi tape just because it supported the green outlining and because it was glittery.  I cut a love heart out of a map scrap which happened to contain the words “Atlantic Ocean” and then several smaller hearts out of US and UK postage stamps, again suggesting that idea of migration, travel, journey.  I also used two air mail stickers just because they chimed with the theme of the page and also it’s colour scheme.

Visually my page was communicating my sense of “not belonging”, of being between two locales.  I have yet to find my place here in America so I still feel rather discombobulated by how alien things are, by my difference and otherness, by all the little things I do not know, by how unfamiliar things are that I used to take for granted back home in Britain.  However, bizarrely and conversely, I do feel at home here.  I feel settled enough on a domestic, family level now – especially having bought a place to call home – that I do now feel at home here in Pennsylvania.  Ultimately that is because the cliche is a truism: home is where the heart is.  Ultimately I belong wherever my husband and kids are.  That, therefore, became the sentiment that I stamped across my page.

So my DLP art journal page this week is really about the push and pull of where I am at as an immigrant, as a wife and mother, as a Scot living as part of the diaspora in America; my page is about that tension between not belonging yet feeling at home.  Hopefully I have managed to convey that in the visual elements and the words on the page.