The sixth Mixed Media Mythology lesson was taken by Corinna Maggy.  The subject was the Hindu goddess Lakshmi.  It was interesting to learn more about her and the symbols associated with her since I only have passing knowledge of the Hindu gods.

Once again, I drifted from what was shown in the exemplar.  Maggy’s piece was very intuitive and layered and focused on the symbols connected to Lakshmi.  I embarked on the piece intending to do the same but I felt compelled to incorporate a face.  Perhaps it is because all of my other pieces for this course have included a face or perhaps it is just because I generally like to draw people.  I decided to go with my instinct, however, so I drew a face on top of the layers I had already created.  I used a process similar to the one I used for my last Life Book lesson.  I finished off with collaging on some lotus flowers, petals constructed out of gelli prints, and adding some gold dots. 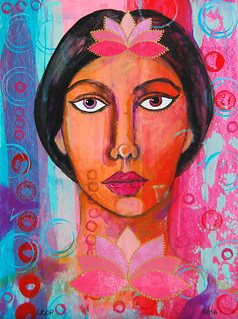