I have lived in Pennsylvania for just over two and a half years now and in that time I have sampled a few state foods.

Despite the fact that Mr Pict and the Pictlings love them and I go into school every two weeks to deliver them to the kids, I do not like pretzels.  I know I should be drummed out of the state for such an admission but I just don’t like them.  I can eat one if I have to but it is not something that I enjoy.  I did like Tomato Pie but I prefer more traditional Italian pizza than this twist on the theme.  I tried Tastykakes and was disappointed – as I had been by my first ever Girl Scout Cookie.  I do like Rita’s Water Ice and frozen custard and like that I can deploy it as a bribe / reward for my kids ever so often in the summer months.  I have mentioned several times on the blog now that I do not like American chocolate, despite visiting Hershey twice now.  The Pictlings have had no such difficulties adjusting their palates to American chocolate but the taste and especially the texture remains alien to my Scottish mouth.  In addition to visiting Hershey, we also did the Turkey Hill Experience to learn how this local ice cream is manufactured.  Ice cream I love; it just doesn’t love me as I am lactose intolerant.

Recently I tried a new local food in the form of some sweet treats from Shane’s Confectionary.  Having started operations in 1863, Shane’s claims to be America’s oldest continuously running candy shop.  It’s store on Market Street, Philadelphia, opened in 1911, when the business moved into retail from wholesale.  Having fallen on hard times in the post-war period, the candy shop was recently lovingly restored.  We will have to take a trip there with the kids some time.

We actually received some Shane’s candies as a New Year gift and, knowing they were special, I saved them for a rainy day.  We had some cherries that had been soaked in brandy and covered in chocolate.  These tasted divine and the crunch through the chocolate into the chewy, fruity centre was pleasing.  They also had a lilac metallic lustre to the chocolate coating which made them extra magical.  There were also some chocolate caramels.  The kids all loved those but, given American chocolate does nothing for me, I was not bowled over by those. 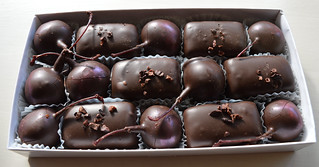 The boys also had a moulded sugar steam locomotive.  Apparently these clear candy toys  – brought to PA by the Amish – are a holiday tradition at Shane’s, with parents buying them up for their children’s Easter and Christmas gifts.  I have happy memories of going to an Edwardian style sweet shop with my Gran and picking out a variety of boilings which were plopped into a paper poke and treasured and savoured during shopping expeditions.  I completely understand the tradition and the element of nostalgia.  The train was literally just boiled sugar though and, therefore, would have been too bland for my liking.  Give me Kola Kubes and Soor Plooms any day.  There were no complaints from the younger sweet-toothed Picts, however. 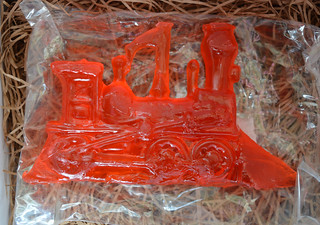 So that is Shane’s Confectionery ticked off the list.  I wonder what my next experience of edible Pennsylvania will be.