This Labour Day weekend, my four boys got to experience an American tradition: running a lemonade stand.  They suggested the idea and we supported it.  This was not something they would have experienced back home in Scotland so we were keen to let them do something that their born-and-bred American peers have probably done.

They made a gallon of lemonade from scratch, all taking turns at squeezing the juice from the lemons using the citrus reamer.  I think they liked how aggressive they were getting to be with a kitchen utensil.  I am given to understand now that actually the American tradition for lemonade stands is to use a powder mix as the base of the drink but never mind.  They had never made lemonade from scratch before so that just added to the joy of it all being a new experience.  I also baked chocolate brownies for them to sell. 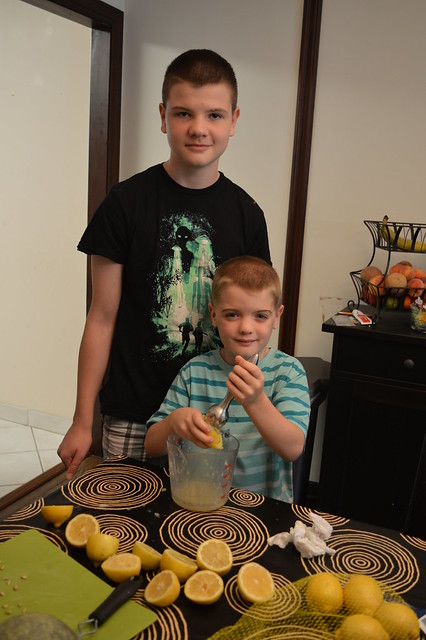 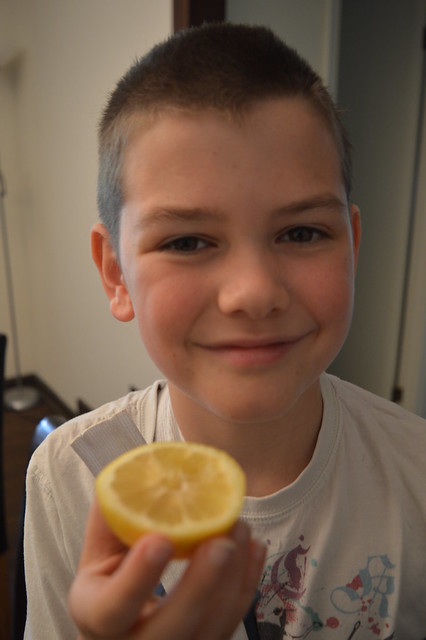 We left them to come up with the promotional posters and to decide on things like the price points.  We provided them with a float and showed them how to set out their income and expenditure accounts, a basic version of course, and then it was time for them to set up their stall.  A Saturday of a holiday weekend and with a storm predicted was always going to be slow going so I used the modern grapevine – Facebook – to send a message around the neighbourhood that they had set up stall and were selling freshly squeezed lemonade and brownies.  What was lovely was that so many neighbours stopped by to give them some support and encouragement, financial and verbal, but they also got some passing trade from cars driving through the neighbourhood and from our mail man. 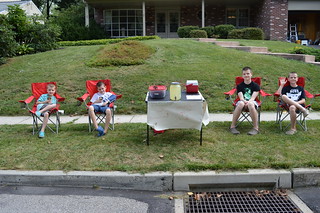 It was, however, still pretty slow going and so they learned something about the boredom involved in certain retail ventures, about handling a rush period alongside stretches of inactivity, and finally about the math of determining profit.  They actually made a surprising amount for a couple of hours of work and were quite pleased with their earnings.  I think they had hoped to rake in much more, however, so it will be interesting to see if they wish to repeat the exercise next summer and – if so – what they might do differently.  It was fun to see them experiencing something new about America, something that is a tradition for many American families, but I mostly enjoyed seeing them work cooperatively as a team and having to interact with other people without having we adults hovering as a crutch.  I like to think they have learned some life skills from the whole experience.  They also got to eat lots of leftover brownies.