Having started off the second day of our road trip in Evans City Cemetery, we began the afternoon by crossing the border from Pennsylvania into Ohio.  Ohio was not only the second state of our travels but was also my 26th state visited.  As I am sure I have shared before, I have a rule for claiming states in that I have to do two of three things in that state in order to be able to “bag” it: pee, eat, sleep.  I have been stuck on 25 states – the halfway mark – since 2002 since every state I have visited since then was one I had already claimed.  I had, however, never been to Ohio before so I was pleased to snag a new state and shift off the halfway mark on just the second day of our road trip.

First stop was Cuyahoga National Park, which is Ohio’s only National Park.  We stopped in at the Boston Store to get our National Parks passport stamped.  Now the park’s visitor centre, it was once a store (as in warehouse rather than shop) with boarding rooms for workers and dates from the 1830s. 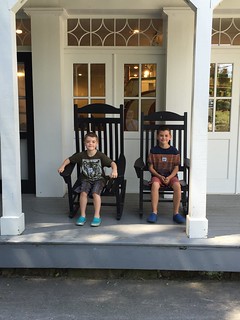 The park is essentially a large recreation area with a focus on the history of the Ohio and Erie Canal, which runs through the land.  We, therefore, popped over but not into the Canal Exploration Center which sits on the bank of the canal at a point where there is a lock.  My oldest son and I went to have a brief wander while the other three continued filming their zombie movie under the supervision of Mr Pict.  In addition to us having lived beside the Crinan Canal for over ten years, my in-laws owned a canal boat for a decade, so there was really nothing new or diverting to see at least with that particular stretch of canal.  To be honest I was much more engaged in watching the insect life in the adjacent meadows, including some glorious dragonflies. 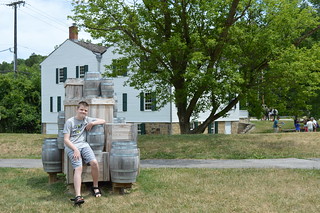 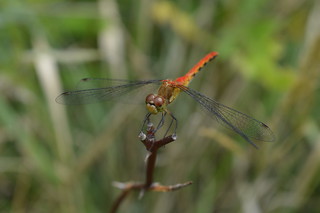 We did not malinger very long in Cuyahoga National Park because we had plans for Cleveland.  Alas, so did the Republican Party since, of course, the Republican National Committee was being held in Cleveland that very week.  Our plans were, therefore, thwarted since the entire city centre was on lockdown for security reasons.  I, however, was able to quickly come up with an alternative plan – another cemetery.  We began the day with one cemetery so why not bookend with another?

The cemetery in question was Lake View Cemetery, an absolutely massive cemetery dating from the 1860s and containing over a hundred thousand graves.  With a site that vast, we had to give our visit some focus so we decided to concentrate on searching for some “celebrity internments”.   Mr Pict and I noted that this cemetery was much busier, seemingly much more popular, than any other cemetery we have visited in the past – and we have visited loads.  Then we observed that almost all of the other visitors were staring at their phone screens.  The penny dropped: people were playing Pokemon Go and were searching for animated characters throughout the cemetery grounds.  Funny.  It made it quite a different experience than our usual explorations in cemeteries. 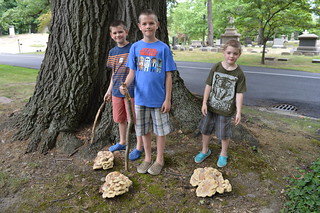 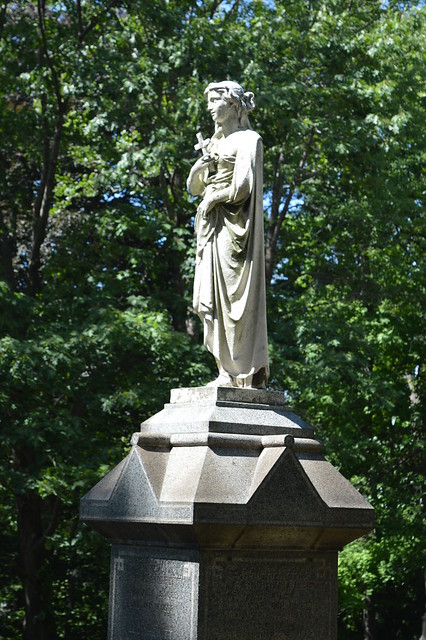 Most prominent among these was President James Garfield.  I am pretty sure Garfield is not one of the first names anyone thinks of when asked to name a US president.  However, because he likes to be obscure, my 10 year old had elected to present a research paper on Garfield when studying presidents in second grade.  He, therefore, was pretty chuffed to be getting to visit Garfield.  Garfield is, in fact, probably most notable precisely because of his death, having been assassinated.  He died, after suffering for several weeks, just 200 days into his presidency.  He was also notable for being an authentic “log cabin president” having had a very humble start in life.  The monument is an imposing building not too far into the cemetery.  A rotunda just inside the door contains a statue of the president.  We then descended into the crypt where we viewed the coffins of the president and his wife, Lucretia.  We then ascended a spiral staircase to an exterior balcony that afforded us wonderful views over the cemetery and to the skyscrapers of Cleveland’s city centre. 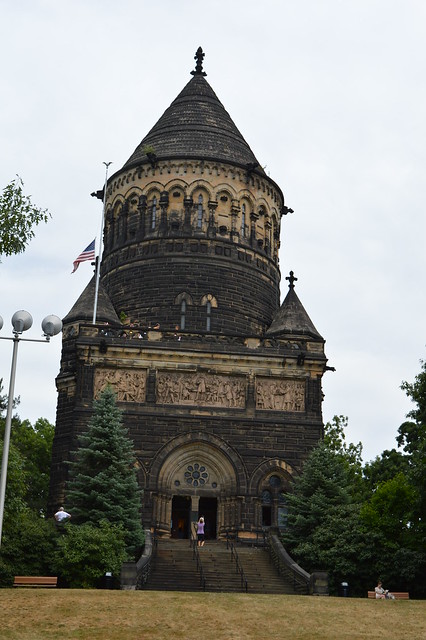 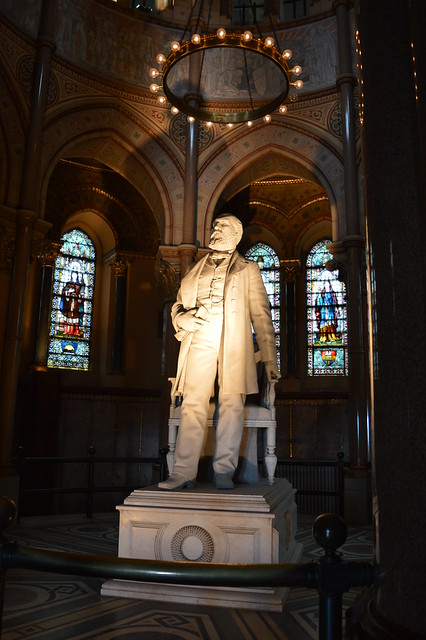 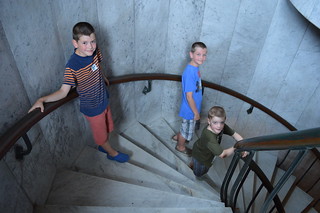 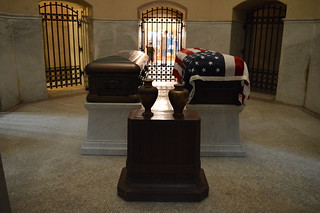 A mere hop, skip and a jump away, we found the obelisk marking the grave of billionaire oil tycoon John D Rockefeller and, on the way to it, I passed the grave of a man who had been born in Inverness, a fellow Scot.  We also saw the graves of Eliot Ness – and someone had plonked a bottle of beer beside it – and graphic novelist Harvey Pekar which was studded with pens.  Having just finished reading Bill Bryson’s book about the summer of 1927, I was eager to find the graves of railrood tycoon brothers Oris and Mantis Van Sweringen and US Ambassador to France Myron Herrick (fantastic names all).  I was also very keen to locate the grave of Charles Chesnutt, one of my favourite American authors, but between the sweltering heat and the tired children, I had to abandon my quest.

A favourite grave, however, was that of an individual named Haserot (who a bit of googling tells me was a big deal in canned foods).  The grave is marked by an arresting sculpture of an angel with spread wings, hands resting on an upside down torch to symbolise a life that has been extinguished.  The sculpture is quite spectacular enough but what adds to its charm is that the bronze has discoloured so much over time that the angel appears to be weeping black tears.  It really is very striking.  It was also a great way to end our explorations of the cemetery. 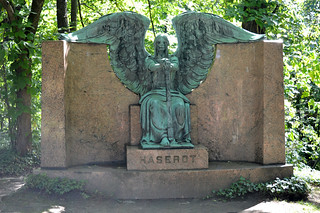 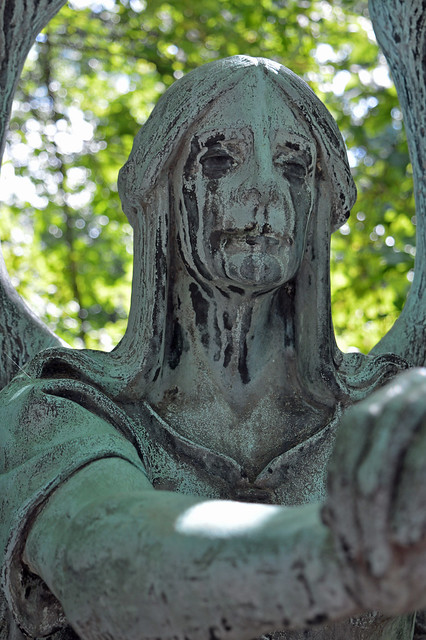 Our rest for the night was in a motel in a town in Cleveland’s orbit.  Booking non-chain accommodation can always be a bit of a lottery.  As we pulled up and noticed that this was one of those motels where the room doors open up onto the road, the kids started muttering about being terrorised and murdered in their sleep despite having never seen Psycho or any other slasher movie.  We parents were more concerned about the fact it was right on top of a building site and the car park was strewn with loads of beat up vans and utility vehicles.  Our rooms – we needed two – were very basic, spartan even, but were clean and tidy and the beds were adequately comfy.  Asbolutely no frills but that reflected the budget price.  The kids, however, did enjoy the outdoor pool and the fact that the motel was next door to a 7-11.  Despite having lived in America for almost three years, this was the first time they had ever been to a 7-11.  They each picked a gigantic slurpee.  I guess that was another American cultural institution checked off the list.