On our first full day in California, we headed – with the extended family – to the La Brea Tar Pits.  This was something I had always wanted to do in LA yet had never actually gotten around to doing so I was really looking forward to it.  The Tar Pits are actually free to visit but we paid for entry tickets so that we could also visit the on-site museum.  It is, therefore, a bit like visiting a very cool, unique public park.

The tar pits are a result of natural asphalt rising up from the earth and seeping through the surface.  These same tar pits have been bubbling and oozing in this way for millennia.  Back in prehistoric times, this gloopy tar would trap animals who got too close and found themselves stuck.  It was explained that while herbivores might become stuck, they would then be joined by carnivores who were opportunistically hoping to devour the trapped beasts but would then themselves become trapped.  In my mind, I envisaged a pyramid of Ice Age creatures all glued together with black sludge.  The black lakes of asphalt would then swallow these corpses down only to burp them back out again millennia later as fossils.  Because the oils would be absorbed into the bones, they acted as a preservative.  This means that not only has La Brea provided paleontologists with amazing finds of large mammal bones but it has also provided them with tiny fossils of rodent bones, plants, and seeds. 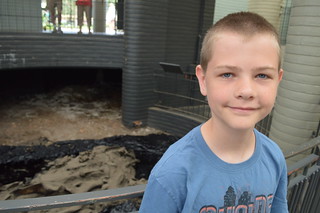 While people were obviously aware of the tar pits during that whole time period – the local indigenous people using it to seal their boats and ranchers losing livestock in them – it was not until the early 20th Century that any effort was made to excavate the pits and record the fossil finds.  We were able to visit one such excavation pit and could also spectate as volunteers picked through sludge from barrels of tar searching for fossils.  I thought it was pretty cool to be visiting a site still being actively excavated and researched after a century.  Little me had considered being a paleontologist until I spent a day with a paleontologist and learned how much science was involved in the process.  I did not and still do not possess a scientifically wired mind.  I still find the whole subject fascinating though. 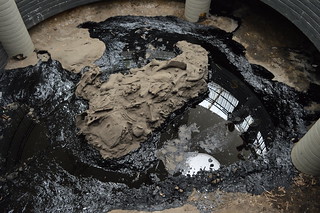 What was great about the tar pits being in a park was that my feral kids could run around and climb to their heart’s content while we adults moved more slowly from pit to pit (which are safely fenced off) taking time to read the information boards and really look at things.  In one area, the tar was really bubbling.  Cousin J and I found ourselves staring, mesmerised by the continuous formation and popping of gloopy black bubbles on the shiny surface of the tar pond.  I think if I owned a tar pit, I would find it rather calming.  The kids meanwhile were rather enjoying clambering all over the full-size statues of giant sloths and other prehistoric critters.  They also found areas of grass where tar was seeping through the surface.  Immediately, all five kids would find sticks to poke into the tar.  If they thought they might pull out a mammoth femur, they were sadly disappointed.  Simply poking the sticks into the black sludge seemed to occupy and entertain them, however. 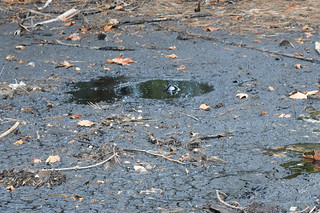 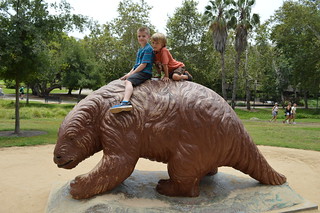 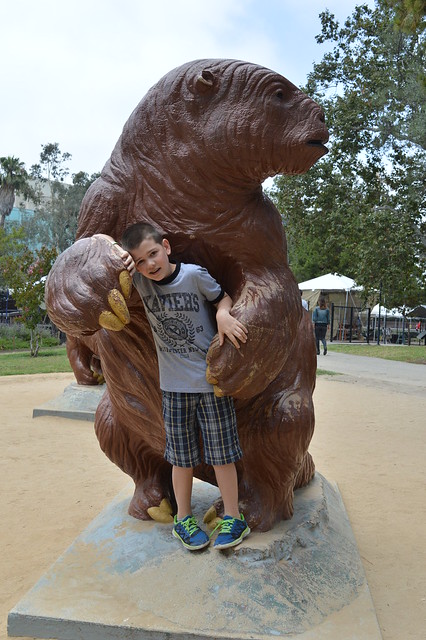 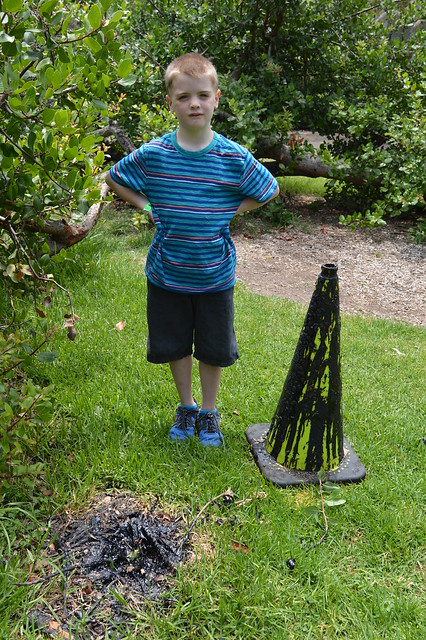 One of the big features of the La Brea Tar Pits is a lake.  From a distance, it looks like an ordinary lake, albeit muddy and unappealing looking.  Up close, however, it is clear that the oil and asphalt beneath the surface are mixing with the water to create a slick and bubbling pool.  What was interesting to me was the way the slick scum of the surface would gather at the edge of the water, creating rippling rings.  There were models of adult mammoths and a baby at the shoreline to illustrate the “nature red in tooth and claw” point about creatures getting sucked in and mired in the tar, stuck there for eternity – or until a paleontologist scoops them out of a barrel millennia later at least. 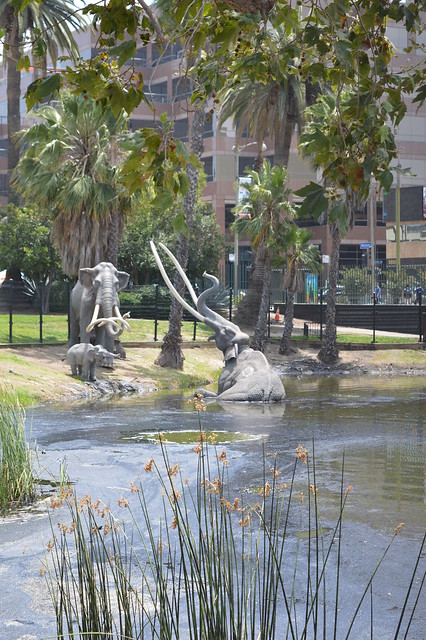 After a quick lunch of fresh fruit, we headed into the Museum.  The kids enjoyed a 3D movie about the tar pits, showing mammals getting gulped down as they wandered across the treacherous landscape.  For me, however, the highlight was getting to see so many reconstructed fossils from the site.  There was a colossal mammoth (if that isn’t a tautology), a giant sloth, prehistoric horses, sabretooths, a cave lion, birds, some sort of archaic bison, and dire wolves galore.  If memory serves (which it possibly doesn’t, not reliably anyway) then I think I read that more dire wolves have been discovered at La Brea than any other mammal.  This is perhaps because wolves hunt in packs so if one wolf ran into the tar then probably a whole lot of its chums did too.  There was a neat diorama showing dire wolves running as if on the hunt with the wolves depicted in different stages of reconstruction, from bare fossils to fur-covered, taxidermy style.  There was also a vast wall of brightly coloured, lit boxes each showcasing a single dire wolf skull.  While there, a museum docent let the littlest Pict touch the skulls of a coyote, a modern wolf, a fox, and a model of a dire wolf skull. 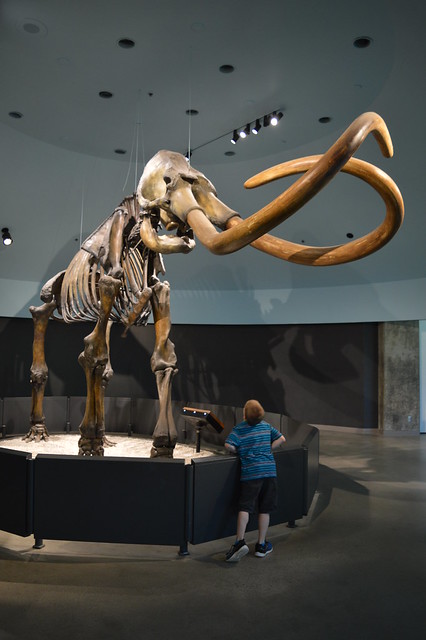 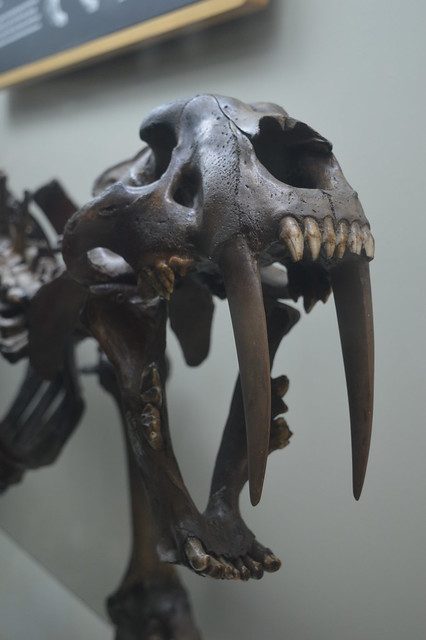 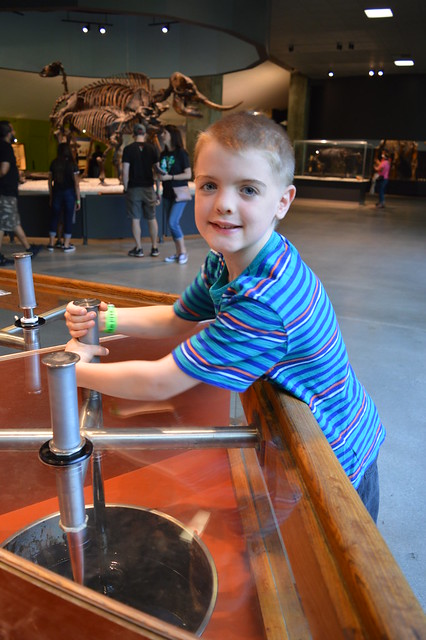 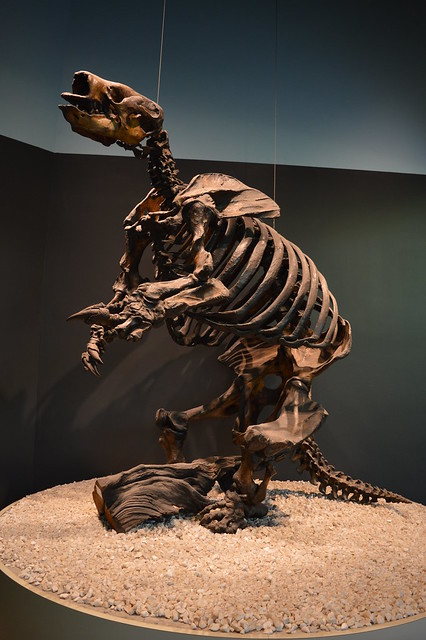 I am so glad I finally made it to the La Brea tar pits.  It was a really cool and interesting place to spend a few hours in LA.