This year, as well as continuing with the Documented Life Project (DLP) in its new format, I am embarking on Life Book 2015.  That will be my first ever online art course and actually only my second ever online course – the first being about writing my family history – and it is quite a commitment since it runs all year.  I am looking forward to honing my skills with mixed media techniques, learning new approaches, trying new materials and media and just trying new creative things.

For both the DLP and LB, the initial pieces for the year focused on goals, ambitions and intentions for 2015.  I have never been one to set New Year resolutions but I do set myself goals, things to strive for in the year ahead.  I set myself 9 goals last year and actually managed to achieve most of them.  Writing up my family history was, with hindsight, far too ambitious.  I did, however, write up the history of one of my genealogical lines.  My other family history goal – to reorganise my family history photos into a bigger album – was also ridiculous given that my photo albums were in storage boxes until a couple of months ago.  However, all things considered, I did pretty well with my goals for 2014.  Hopefully I will achieve similar success with my 2015 goals.

There were two DLP prompts for the first week.  The prompt was to “be your own goal keeper” and the challenge was “book paper”.  I considered combining the two but I had actually created a background a few weeks ago when I was at my Art Journal MeetUp group and I thought it would work well for recording my goals for 2015.  I wrote the individual goals inside the geometric shapes but I also decided to set myself a word for the year and incorporated that in the central circle.  My word for the year is “balance”.  After two years of relocation, change, transition and adaptation, I am ready to try and reestablish some balance back into my life and in every area of my life.  Hopefully the goals I have set will help me achieve and restore that balance. 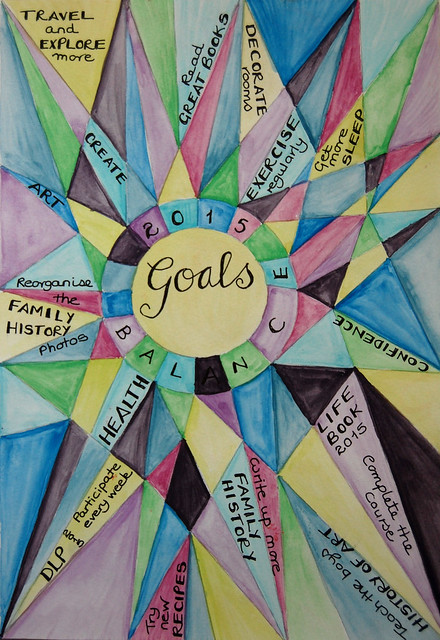 Despite my best intentions and my anal retentiveness regarding punctuality, despite my decision to strive for balance this year, I have started the year already trying to play catch up with my creative commitments, including DLP and Life Book (LB).  I decided, therefore, to do a very quick page with the book paper prompt.  Someone happened to inform me that 2015 is the year of the sheep.  That was all the inspiration I needed.  I cut a fat, puffy, cloud shape from a dictionary page – choosing the page that had the word “sheep” on it which I then cut out and added to the page.  A quick scribble with black and white gel pens later and that shape had become a silly sheep.  I used stamps to write the word “balance”, which was an ironic reminder of my key word given I was hastily putting together my page while simultaneously making dinner and doing laundry. 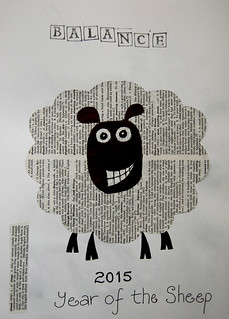 The warm-up exercise for my first ever LB lesson was – by coincidence – also about setting a key word for the year.  The lesson was about teaching a layering technique in mixed media.  I chose to work in purples, blues and magenta which in retrospect might have been a mistake because, once I had applied the gesso layer which knocked back the colours, I didn’t particularly like the pastel shades that emerged.  They reminded me of hydrangeas which I have never been a fan of because I associate them with decay for some reason.  I enjoyed the layering technique, however, and can see it is an approach I will take again but this time using bolder colours for the first pass and then bringing them back stronger in the layer on top of the gesso.  See!  I learned something already.  The envelope on the front contains my goals for the year, closed up with washi tape, and I stamped on some butterflies for visual interest.  I then used stamps and sharpie to write the key phrase: find balance. 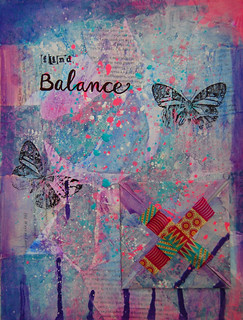 Now I don’t even know if I will recognise balance if I find it.  I don’t actually know if I can thrive and flourish in a balanced state.  My husband thinks I function best when I have a bit of a palaver going on.  I think he is probably right.  Still worth striving for though and certainly I could benefit from being more balanced, calm and settled than I have been these past two years.  Let’s see if it comes to pass.