Today is my birthday.  Today is also election day and, since my workplace is used as a polling station, my birthday treat is a day off of work to be home alone.  Each year, on a weekend adjacent to my birthday, I get to decide where we go and what we do for a day trip.  I love museums so my choice was to visit a museum in Philly that we had not yet visited.

The National Museum of American Jewish History is situated in the old city.  It is housed in a lovely building that allows its collections to be organised into clear chronological and narrative strands.  We started on the an upper floor and with the story of the first Jewish community to immigrate to the United States and then moved throughout the galleries and levels to learn about the contributions the Jewish community have made to American history and culture.  I realised that I knew almost nothing about Jews in colonial America so I found that gallery to be especially interesting.  My kids enjoyed the section about migration within the US and my youngest had a hoot dressing up in prairie clothes and pretending to cook beneath the covered wagon.  He tried on various costumes in several sections of the museum which was a great way to keep him moving and engaged.  At one point he even pretended to be a dog in a kennel.  My 14 year old is currently reading the book ‘Refugee’ by Alan Gratz so he liked the display about the perilous journey of the St Louis and, of course, the tragic consequences of countries refusing permission to land.  Predictably, Mr Pict liked the section on the Civil War.  For my part, I really enjoyed my visit to this museum.  I especially like social history and there was plenty of that being showcased.  I actually would have benefited from more time in the museum as I had to rush through the last section and even then we were the last visitors to leave and they literally locked the doors behind us. 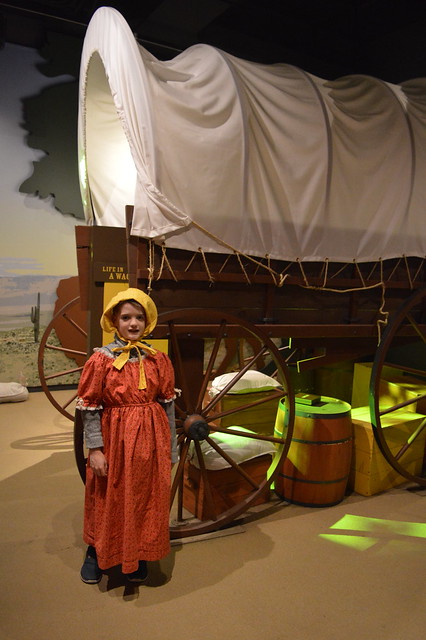 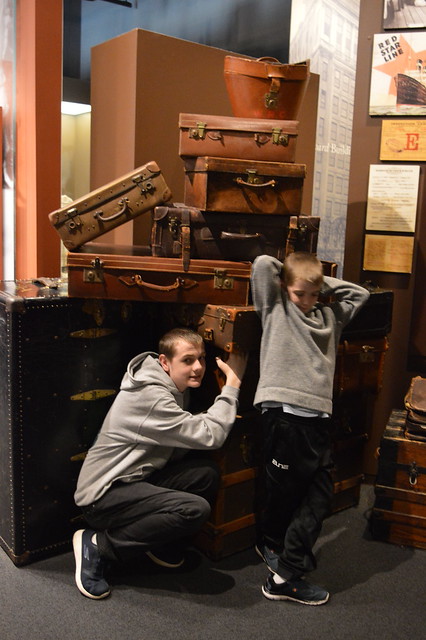 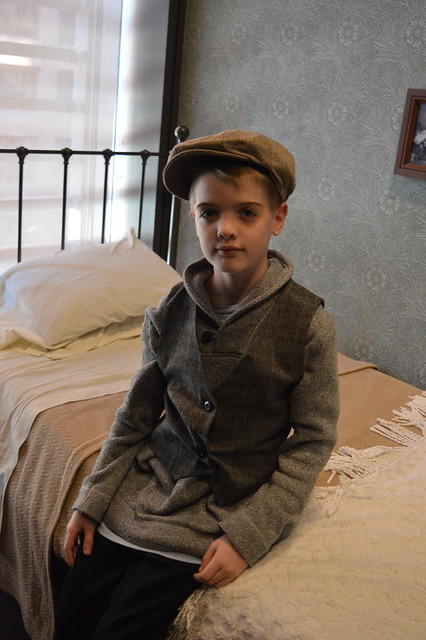 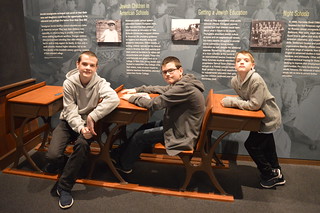 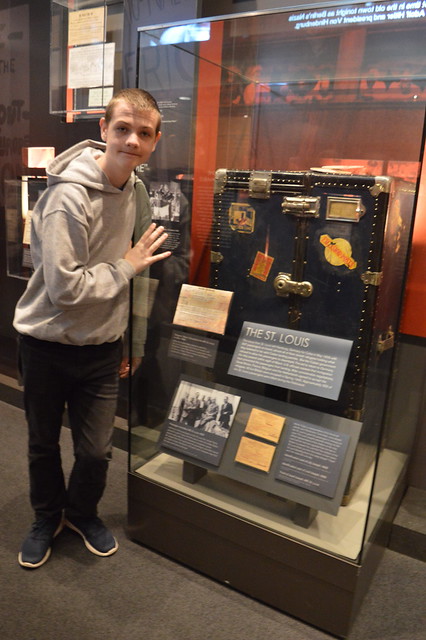 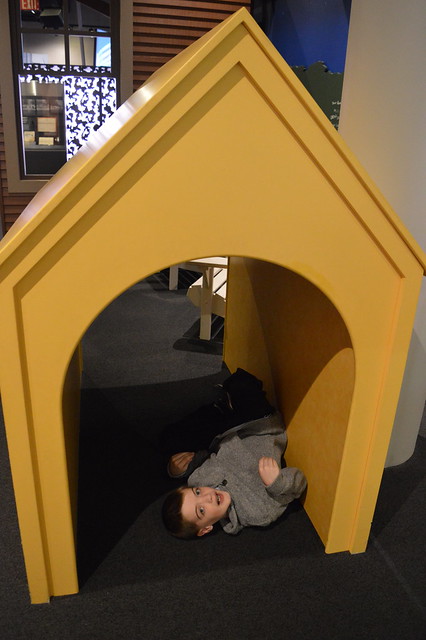 After the museum, we headed off in search of food.  Before we found a suitable option, however, we passed Shanes Confectionery and had to pop in.  Aside from being a sweet-toothed family, Shanes claims to be the longest running confectionery shop in the US.  We were gifted some Shanes chocolate and famous clear candy a few years ago now so we have sampled some but it was great to finally be in the store.  Stepping across the threshold was like stepping back in time as the store has been lovingly and beautifully restored to its early 20th Century style, including restored machinery and gadgets.  My oldest son found the narrowness of the store to be too claustrophobic for his liking but the rest of us thought it was all wonderful.  My youngest is a chocaholic so he was smitten to the point of being overwhelmed by all the marvellous chocolates.  He is also cat-obsessed so he loved seeing chocolate in feline form.  I loved seeing the old cash registers and the stained glass and the patina on all the wooden shelves.  There were so many fabulous confections to choose from but we rose to the challenge and made our selections. 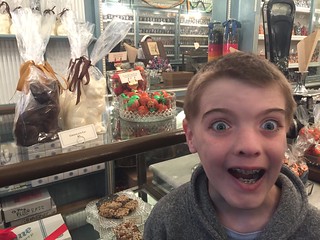 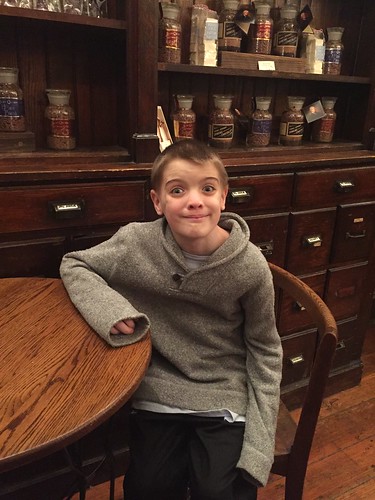 Dinner was in a British themed pub.  We were all excited to spot that Irn Bru was one of the soft drinks available.  Even though the recipe has (somewhat controversially) changed since we left Scotland, it was a taste of home.  There were also mushy peas available as a side so Mr Pict and I ordered those.  They were far too good quality to taste authentic but that is not a cause for complaint.  I can usually only manage a single course when eating but I had spotted sticky toffee pudding on the menu so had to order it – though I did share with some of the boys.  I was delighted to discover that it had been made with dates just as it should be.  It was scrumptious.

The closing ceremony for my birthday trip was to view an art installation on the Delaware River.  When we arrived at the Race Street Pier, it was already dark so the ghost ship should have been visible.  Alas, it was not.  We were informed that the organizers were experiencing technical difficulties and they had no timeline whatsoever for a resolution.  Oh dear.  The crowd was restless.  Some people were loudly complaining.  We took up a position along the pier’s barrier and waited patiently for the glitch to be fixed.  After half an hour of waiting, however, the boys were bottomed out on patience and started to plead with me to give up and to just go home.  I was, however, determined to see this thing so just tuned out their gripes.  I admit that even my patience was waning as the cold seeped into my bones some time after the 40 minute mark.  Finally, water erupted from rigging that sat on the water’s surface and, as the fountains spumed, the image of an 18th Century schooner appeared, projected onto the water.  It was impressive and I was glad to see it.  Was it remarkable enough to wait almost an hour in the cold with four moaning children?  The verdict is still out. 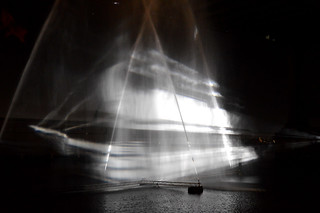 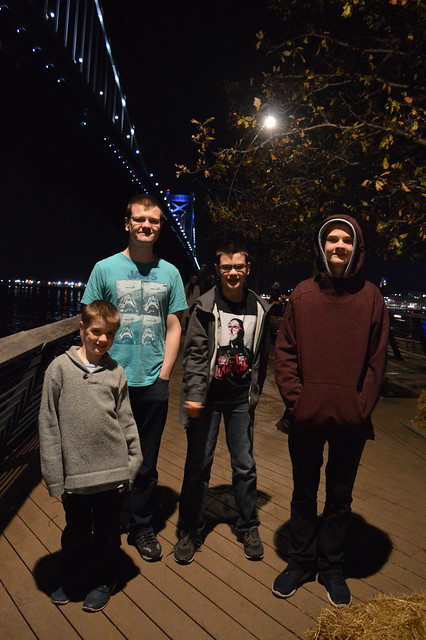