Last week’s Art Journal Adventure prompt was “colour gradations”.  I was greedy and decided I wanted to use all of the colours of the rainbow rather than shades of one colour for a monochromatic scheme.  That gave me the idea of drawing Iris.  I painted Iris, goddess of the rainbow, last year with mixed results and there are definite echos of that piece in my art journal illustrations – the black background, the pale hair, the sweeping curve of the body – but in a more naive style.  I jump between styles a lot.  That probably makes me a “Jack of all trades and master of none” but it also stops me getting creatively stuck and bored. 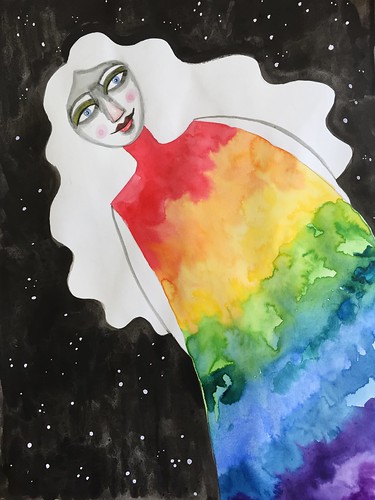 The next lesson I undertook in Mixed Media Mythology was taken by Jeanette Montero.  The subject was Iris, goddess of the rainbow and messenger of Zeus.

As ever, I drifted quite far from the exemplar, taking ideas from the lesson and making them my own.  This time the elements I took from the tutorial were colourful spatter on a black background and incorporating the oenochoe jug. 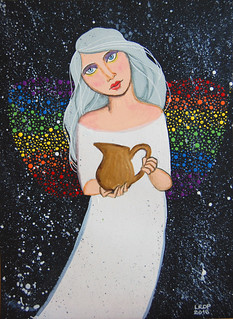 I wanted to give my figure’s body a gentle curve to echo the curve of a rainbow.  I also had the idea of letting her lower body fade out rather like the ends of a rainbow fade out.  I am not convinced that latter decision has worked well in the composition, however.  I like the spectrum dots behind the figure but am not wholly convinced that they read as wings.

Iris was the Greek goddess of the rainbow and also acted as a messenger to the gods because she could travel from one end of the world to the other and travelled speedily with the wind.  Indeed, she was married to the west wind, Zephyrus.

I feel quite lucky to have drawn Iris today since it led effectively to a simple line drawing with a quick brush of watercolour stripes over the top.  We have a cinema trip and a restaurant dinner with six kids as a birthday celebration today so I would not have had time in my schedule for anything more elaborate.  In classical art, Iris is depicted either as a rainbow or as a young winged girl.  I decided to combine both in my drawing.  I painted the spectrum stripes from the top to the bottom of my paper so that the rainbow cut right through and across the figure.  I then gave her silvery wings since the word “iridescent” is derived from Iris’ name.  I don’t have iridescent ink so silver was the best I could do.