Missouri was my 39th state and was supposed to be the last new state I picked up on this road trip.  As Mark Twain is one of the most famous Missourians and our route took us through Hannibal, we decided we would stop off there and theme our day around Mark Twain.  It did not quite turn out as we anticipated.

My expectations were of a picturesque town full of 19th Century architecture, scenic views of the Mississippi, and lots of tasteful commemorations of and references to Mark Twain.  Well, that is not what our experience of Hannibal was.  While there were some lovely old clapboard houses, they were the exception.  While the streets were pleasant enough and the buildings were vintage, they tended to be those characterless brick built blocks.  We parked up on a side street in front of the Haunted House on Hill Street.  A lovely, friendly lady met us on the porch and encouraged us to pop in.  Why not?  I enjoy waxwork models whether they are exceptional likenesses or tragically awful so we couldn’t lose really.  We must have been in an unusually persuadable mood because we ended up purchasing joint tickets for both the waxworks and another attraction in town. 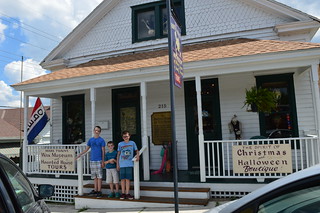 The store front was filled with jewellery and trinkets and various Halloween-esque homewares and we were led from it through what looked like a closet door.  This placed us in a darkened room and in a corridor in front of a large glass window that separated us from a whole community of wax figures.  The figures represented Samuel Clemens (Mark Twain) and his family members plus people he knew who inspired characters in his texts, especially ‘Huckleberry Finn’ and ‘Tom Sawyer’.  A recording was set to play that highlighted each of the figures in turn and explained their role in Mark Twain’s life and literary story.  The narrative was actually very well done and was informative – especially for the five members of the Pict family who have never read a word of Twain.  I am going to struggle to describe the wax figures because they were just eerily weird.  I don’t know where the balance was between realism and caricature but the outcome was just awry; they were both very well done and somehow very lacking; creepy pretty much sums them up. Just plain creepy.  Something that made them that bit more creepy: Tom Sawyer has actual human teeth and Mark Twain’s infant son was just a head on a stick.  From there, a doorway at the end of the corridor led us into some very dark and narrow nooks and crannies, these forming a pathway past some spooky dioramas.  The lighting and dayglow elements made the best of the visual effects but what worked most effectively were the floor panels that would trigger movements and sounds and the ankle-level rubbery brushes that would unexpectedly tickle our legs as we walked past.  We emerged out of the darkness back into the bright light of the gift shop giggling and thoroughly entertained, albeit maybe not in the way that was intended. 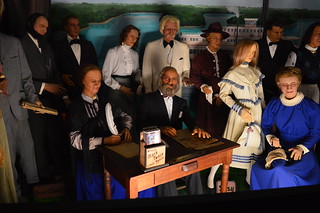 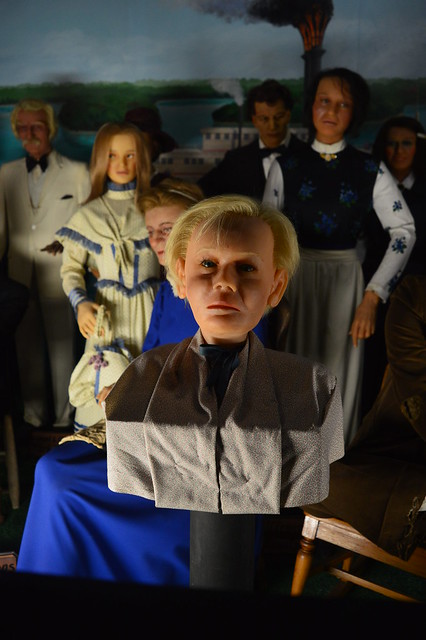 A stroll of a few blocks brought us to Karlocks Kars, for which we had the joint ticket.  This small museum was a collection of vintage cars, driving memorabilia, gas pumps, jukeboxes, pinball machines, and advertising, plus some vintage toys and movie memorabilia thrown into the mix.  It was all well curated and immaculately presented but random as heck.  My favourite items was the Model T Ford made entirely  from wood, including its engine parts.  Mr Pict and the boys loved the pinball machines and vintage arcade games – which enabled Mr Pict to relive his misspent childhood.  Our 11 year old loved seeing one of Steve McQueen’s motorbikes, and our 12 year old loved the Coca Cola memorabilia and the vampire seated next to his werewolf rug and Kermit slippers.  I also enjoyed all the vintage advertising, whether it was the graphic design on tin or the bold neon. 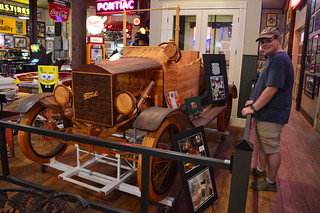 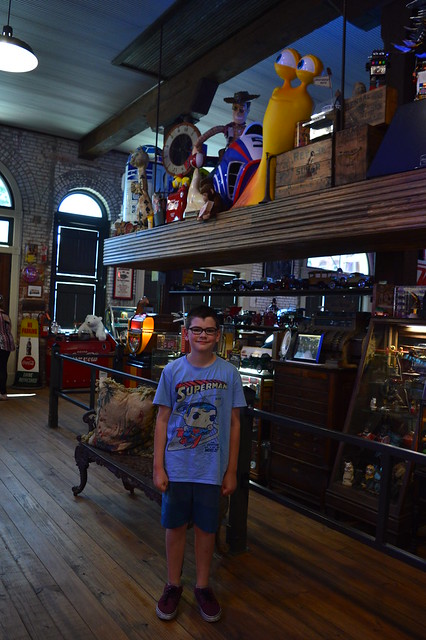 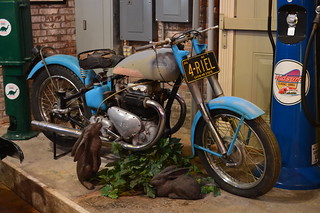 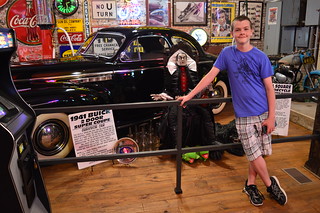 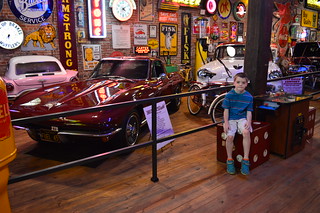 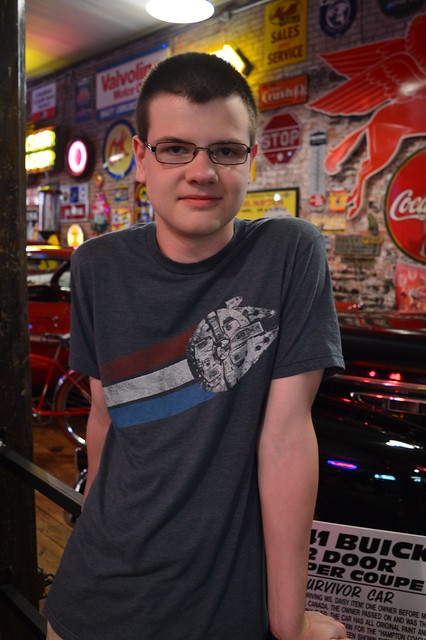 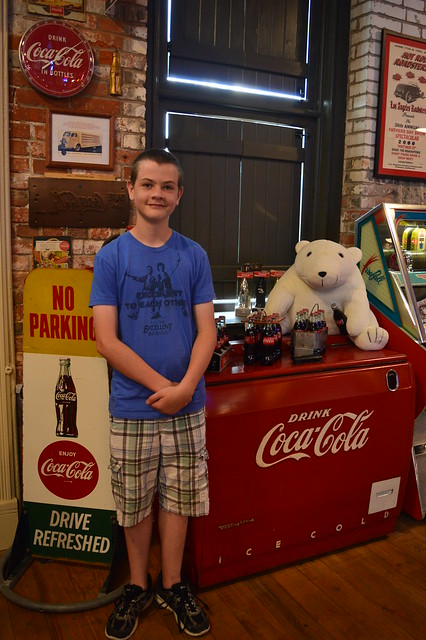 I had a vague plan that we could visit the cave that inspired the episode in Twain’s novel where Tom Sawyer and Becky Thatcher encounter Injun Joe.  The cave had also once been used for experiments regarding the preservation of corpses.  However, we did not really have enough time to invest in a tour of the cave so that idea was nixed.  My other vague plan was to visit Mark Twain’s boyhood home but that was met with groans and sighs from the other Picts.  As they had not read any Twain, I could appreciate that to them it would just be another old house to poke around in.  I think the biggest problem, however, was that everyone was broiling hot (it was 100 degrees out!) and started to get hangry.  Before we left Hannibal, however, I did manage to convince them to let me visit the statue of Huck and Tom that stand on a plinth near Main Street.  The statue was erected in the 1920s and I read somewhere that it was the first public statue to fictional characters in America.  The statue stands in a little green space at the bottom of Cardiff Hill and atop that hill is a lighthouse constructed as a memorial to Twain.  The connection between lighthouses and Twain is lost on me, I must admit, but ascending the hill afforded us some great views over the Mississippi. 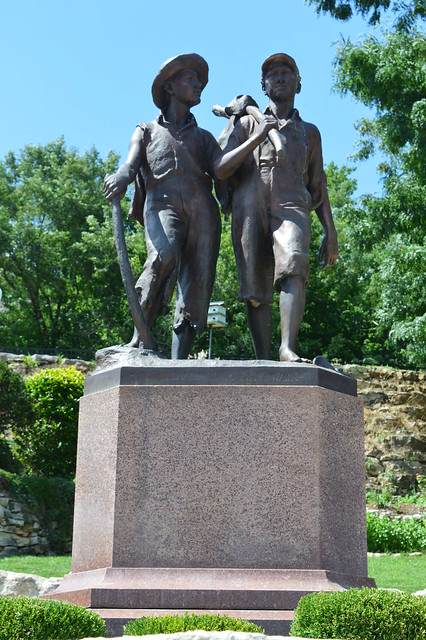 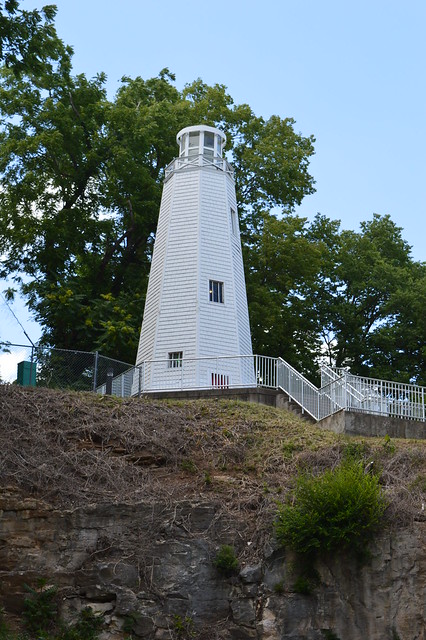 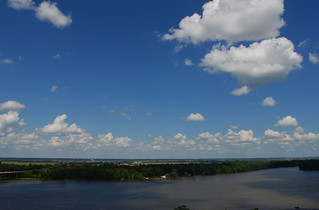 Our day ended with a drive to St Louis.  I had hoped to see at least the Arch but I had not thought in advance about the fact we would be reaching there on the evening of Independence Day.  Yeah, it wasn’t going to happen.  We could not get anywhere near the Arch because streets were being cordoned off in advance of the 4th of July celebrations and fireworks.  Indeed, there was not even any affordable parking left in the vicinity.  We, therefore, took in the views of the Arch as we crossed the Mississippi into Illinois and our beds for the night. 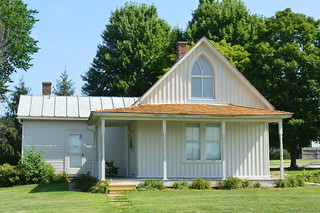 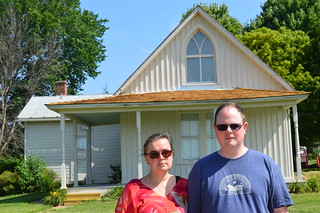 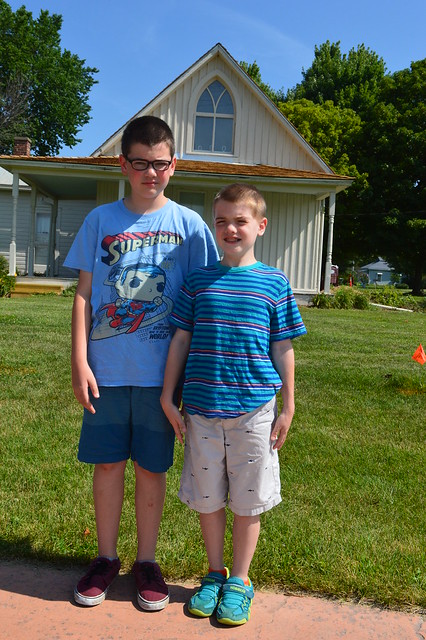 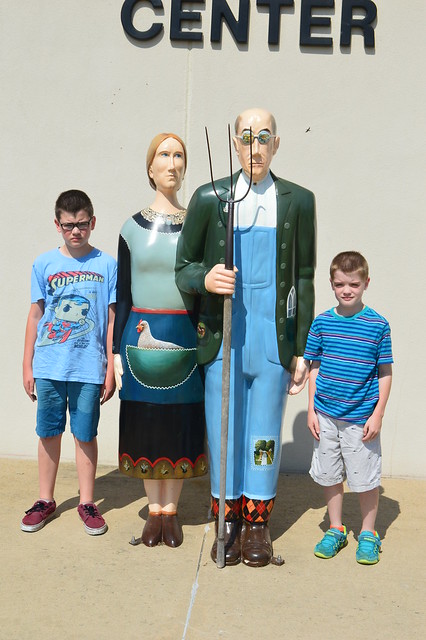 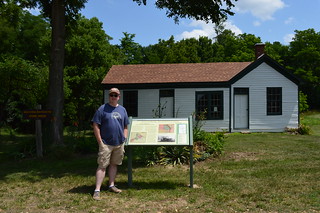 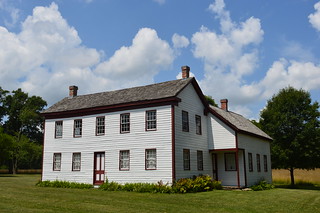 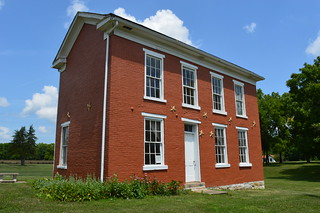 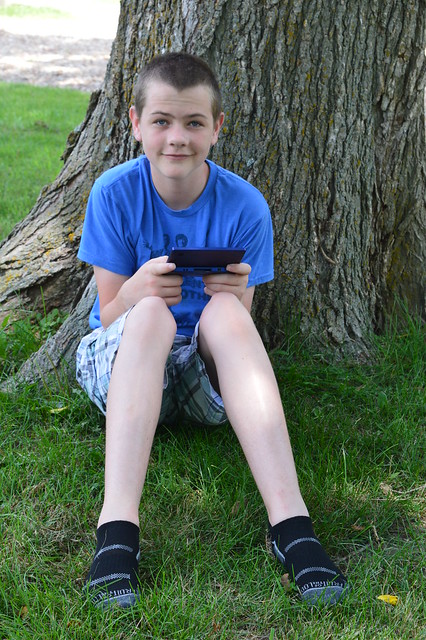 Friday was only my second ever Independence Day spent in America and was the first for the children.  We have celebrated Independence Day in Britain because Mr Pict is half-American and frankly because it is a good excuse to barbecue and feast.  However, without the festival atmosphere, the red, white and blue everywhere and the fireworks, it could never be quite the same.

This Independence Day, therefore, was special because it was our first one spent in America as a family and also because my parents are here visiting.  The fact that three of us are fully non-American did not deter us.  We might be British but we all believe in a nation’s right to self-determination anyway so even politically we would have supported the Revolution.  And, of course, we get to barbecue and feast.  All celebrations end up revolving around food so this was no exception.  Mr Pict grilled up everything from hot dogs and sausages to pork chops, steak and chicken and I made up salads and potato salads.  Because we were not quite bloated enough, we then had chocolate cream pie or a patriotically decorated sponge cake.

The only other time I have been in America for Independence Day was 19 years ago.  Mr Pict and I sat on the hard, cold, bum-numbing steps of the Lincoln Memorial for hours to snag a prime spot for viewing the fireworks over the National Mall.  That was a pretty spectacular experience but our rumps did pay the price.  This time we decided to keep it simple by staying locally so we headed out to one of the local High Schools to view their fireworks display.  Woefully ill-prepared, we had entirely failed to move our new lawn chairs into the boot (trunk) of the bigger car and we didn’t even have a blanket to sit on.  We were going to plonk ourselves on the grass when we spotted a long bench tipped over so we were able to right it and perch on it.  A chap running for Congress was offering people free water ice (which is a bit like a UK slushy) so the boys even got to have a snack despite having parents who had not adequately forward-planned. 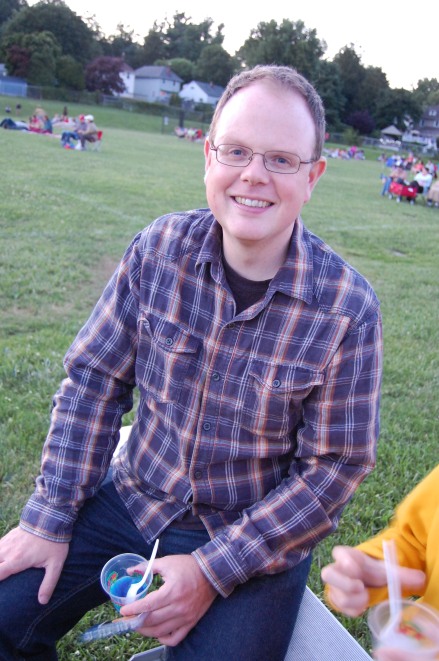 Daylight swiftly became dusk and settled into darkness and the sense of anticipation and expectation was palpable as the sky darkened to an inky blue.  Finally the fireworks started.  My kids are used to fireworks being in November (for Guy Fawkes night) and have usually watched displays while standing on the side of a loch, freezing cold and with their welly boots sinking further into sodden grass.  The only exception was watching fireworks during the last Summer Olympics.  It was, therefore, a welcome and lovely experience to be sitting on a balmy night watching the sky lit up with colourful, sparkling gunpowder.  It was a really good fireworks display with a fantastic finale.  We would definitely go to the same event in future years.

Overall it was a very successful Independence Day. 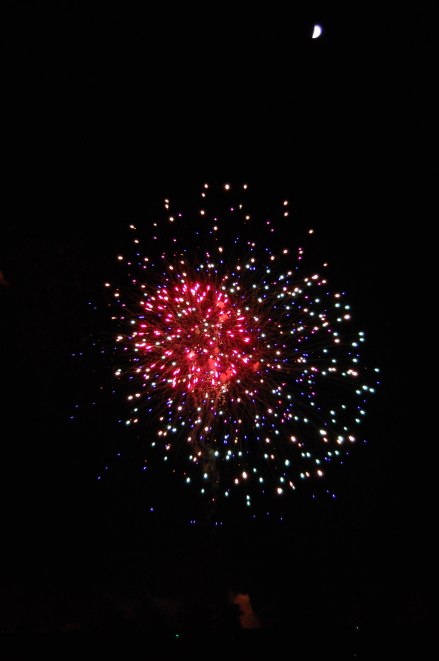 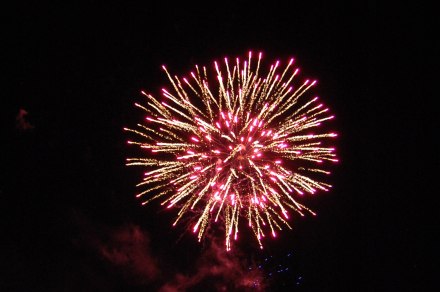