If you are a regular reader of my blog, you may have noticed that it has been quiet for a while.  You may also have noted that – other than finishing off my extended Inktober challenge – I have not produced any art in weeks.  The reason for both is that I was laid low by some mysterious nasty viral thing.  It probably all started on Thanksgiving Day when I spent a large chunk of the day at Urgent Care.  That illness then segued into what I thought was a sinus infection.  I get sinus infections a couple of times every winter so I am used to just treating the symptoms and pushing through.  But then I started to feel really cruddy.  Seriously awful.  What I assumed was a series of separate cruddy illnesses was, it appeared, probably all part of a bigger illness.  A nurse friend diagnosed me with ‘flu from a distance but who really knows.  I just know it was completely debilitating and was the most ill I have felt since I had ‘flu when my 8 year old was a newborn.  During my entire working life, I have had seven sick days off work; three of them were this month.  I had fevers, chills, aches, zero appetite, and a pounding headache that stretched from the backs of my eyes all the way down my neck.  Thankfully my kids are all now old enough to largely fend for themselves and get themselves to and from school because I really was not functioning as a human being let alone as a parent.  Since recovering, I have been very tired – perhaps with some sort of post-viral fatigue – so I have had almost zero free time because staying on top of regular work, chores, family life, and festive planning is taking me longer than usual.  Still, worse things happen at sea and I am thankful to have my health generally.  That, however, is why I have been absent from blogging and why I have not spent any time at my art table.

Still, I was desperate to do something arty because I don’t feel fully like myself unless I am doing something creative.  I, therefore, picked up my Art Journal because it does not matter a jot if I complete the page or not or make a mess in my art journal.  I looked at last week’s Art Journal Adventure prompt which was to  use a quotation.  I am not one of those people who has inspirational quotations to hand so I was pondering what to write while overhearing my kids, who were decorating a gingerbread house in an adjacent room.  They were listening to Christmas music so that gave me my inspiration.  I have been thinking about practicing some brush lettering for a while so I thought that writing down some festive words using a brush dipped in watercolour paint would be an easy, fuss-free way to fill a journal page.  My brush lettering still needs a great deal of work, especially since I have a tendency to be inconsistent and to lapse into just using my own handwriting, but it was fun to practice and it was therapeutic to sit down at my art table again and splash around in some paint. 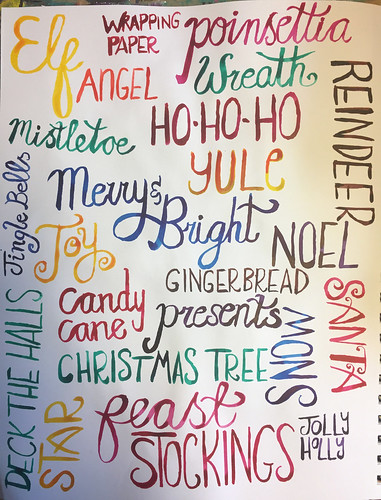 As I was showering yesterday morning, I was smugly thinking to myself about how healthy we have all been since we relocated to America.  We have managed to get through a pretty hard winter with just a few bouts of sniffles.  I had anticipated that we might all come down with various and varying degrees of illness when we moved here just by virtue of being exposed to a new soup of germs and pathogens.  Remembering the Columbian Exchange – where the New World gave Europe a cornucopia of new fruits and vegetables and Europe gave the New World horses and fatal diseases – I was expecting a little germ exchange of our own to happen as we acclimatised to new microbes as well as everything else.  Remarkably, however, no one has fallen victim to more than the common cold and sinusitis.

This morning as I was getting dressed after my shower, however, a feeble little voice uttered those three small words that always seem to be heard in slow motion – “I feel sick”.  This announcement was immediately followed by the littlest Pict spewing all over the floor.

So much for my smug thoughts of yesterday morning.

There has been a sickness bug doing the rounds for weeks it seems.  Possibly it has something to do with the widely fluctuating temperatures we have been experiencing creating the perfect conditions for lurgy breeding.  In any case, despite being in school with a few hundred other little walking bacteria farms, my older boys have emerged from it unscathed.  But the little one, exposed to the minging mini-epidemic through preschool, has succumbed.

So he and I will be under house arrest for quarantine purposes for the next 48 hours and disinfectant wipes and bleach have become my best friends once more.  My 4 year old is pale and listless, a cute wee zombie in cosy jammies shuffling from the bathroom to the sofa and back to flop in front of his favourite DVDs.  He is currently napping.  Poor wee scone.

I am hoping and doing my level best to prevent anyone else picking up this lurgy.  I really don’t like vomit and squirty poo.  Cleaning it up is not my favourite chore.  Even worse, however, is having to nurse child after child through a plague and effectively being confined to barracks for weeks on end as one recovers just in time for the next one to topple, a staggered domino effect of maladies.  And, as my ten year old pointed out, we really need for me to not pick up this bug because, “If Mummy gets sick then life just becomes a disaster.”