I am an incredibly obsessive planner when it comes to our vacations.  Mr Pict and I plot out our route and then I set to work researching the possible things to see and do along the way, drawing up detailed spreadsheets as I do so.  I usually generate 18 to 20 sides of paper per spreadsheet.  Sometimes I even colour code the spreadsheets and draw up corresponding colour coded maps.  Yes, I am a control freak and this degree of planning suits my way of being.  However, it also enables me to be flexible.  If I have a long list of possibilities then I can adapt to something unpredictable, such as bad weather or a child breaking an arm, move away from the thing we planned to do and find something else to place in its stead.  With all of that over-planning, therefore, it does not often happen that I stumble across something unexpected.  That, however, is precisely what happened on the second day of our road trip.

It had not remotely appeared on my research radar but, as soon as Mr Pict and I flicked through the pamphlet in our hotel lobby, we were smitten with the idea of visiting the House on the Rock.  We, therefore, binned the plan we had for the first half of the day and decided to go.  Mr Pict and I love history, unusual architecture, and eccentricity.  House on the Rock offered all three in abundance.  It reminded me of the Mercer Museum and the Shelburne Museum in Vermont, both of which I loved.  We trusted that the property would offer enough variety to engage our kids and set off.  We had not even entered the building and purchased our tickets before we were all smitten with the place.  The road into the property and the car park were lined with bonkers gigantic vase like sculptures covered with crawling dragons. 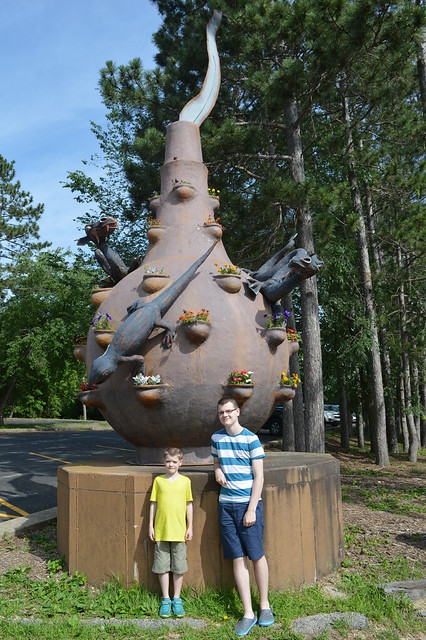 House on the Rock was designed by a wealthy eccentric man with hermit inclinations named Alex Jordan.  An apocryphal story suggests that Jordan embarked on his building as a reaction against a snooty Frank Lloyd Wright, whose Taliesin is nearby.  It is definitely the case that Jordan’s design aesthetics don’t have much in common with those of the famed architect but it was an incredibly fun and fascinating building to explore.  As its name suggests, the house is perched on top of a rock.  Originally one dwelling, Jordan kept extending it so that it became an elaborate maze of a building stuffed to the brim with all manner of antiques, replicas, nick nacks, and random collections.

The original dwelling house itself was pretty weird.  There were narrow, twisting corridors opening up into living spaces, lots of rock walls, and cosy little nooks here and there.  The rooms were dark but the spaces seemed like they would be relaxing and comfortable to hang out in.  I could well imagine lying on one of the banquette sofas with a good book and a roaring fire.  There were beautiful Art Nouveau glass pieces, oriental style cabinets, and lovely metalwork.  There were also mechanical orchestras and string instruments playing music dotted throughout the property.  A big hit with the boys was the Infinity Room.  It juts out from the building and stretches for about 220 feet without having any supports beneath.  While it made me feel uneasy, the kids enjoyed the fact they could feel the room moving when they bounced.  They also liked the optical illusion of the room stretching out to the horizon. 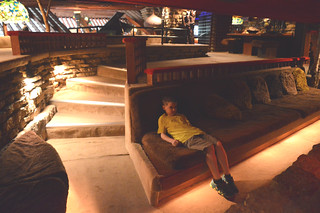 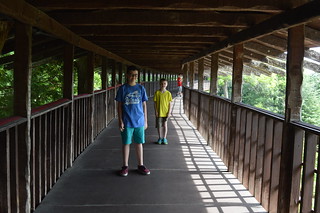 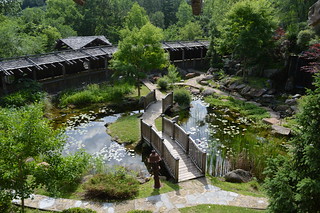 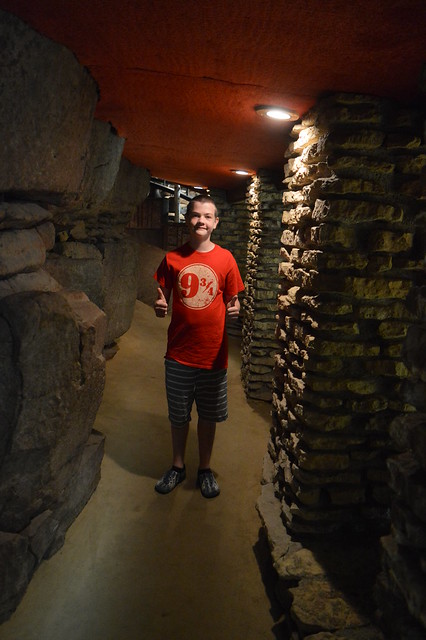 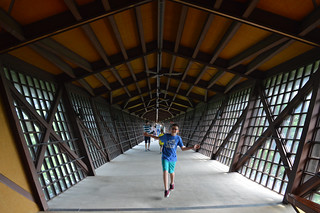 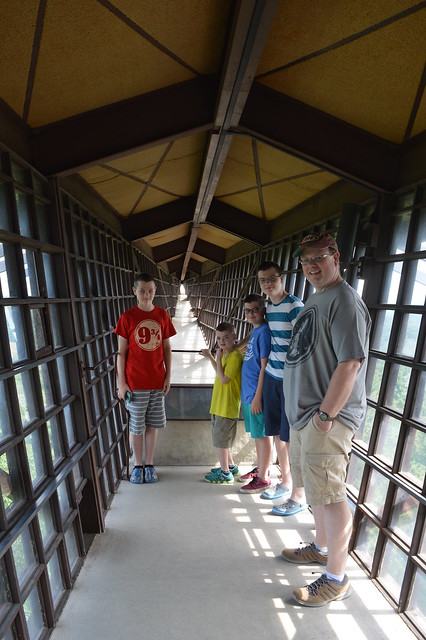 A Streets of Yesteryear section reminded we Potterphiles of Diagon Alley.  It was essentially a reproduction 19th Century street with store fronts filled with displays of collections.  I loved the coloured glass bottles glowing on the shelves of the pharmacy window while the kids loved the Sheriff’s office that included jars containing hands and a head on a desk.  There was also a massive and elaborate calliope at the end of the street.  Along with our tickets, we had been given tokens and the kids were able to use these to make some of the machines work.  Our youngest son popped a token into the calliope and was enthralled to see it working. 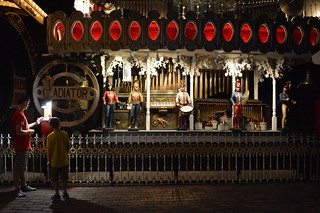 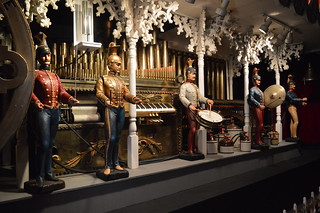 The most incredible section had a maritime theme. The centre of the vast, tall room was dedicated to an absolutely massive model of a squid battling a whale.  It was completely kitsch but also utterly impressive.  By moving onto different levels of the room, we could take in the detail of different areas of the model but it was impossible to stand far enough back to take it all in.  It was completely bonkers and we loved it.  There was also an automaton octopus that played The Beatles’ ‘Octopus’ Garden’ when a token was popped in the slot.  Surrounding displays in the same room exhibited various maritime items, such as beautifully crafted model ships, scrimshaw, and a diving suit. 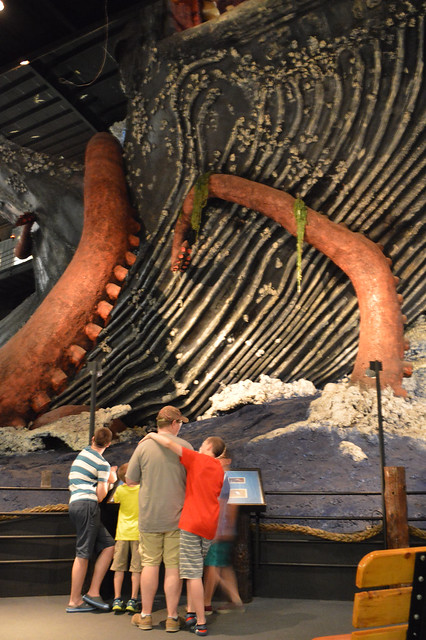 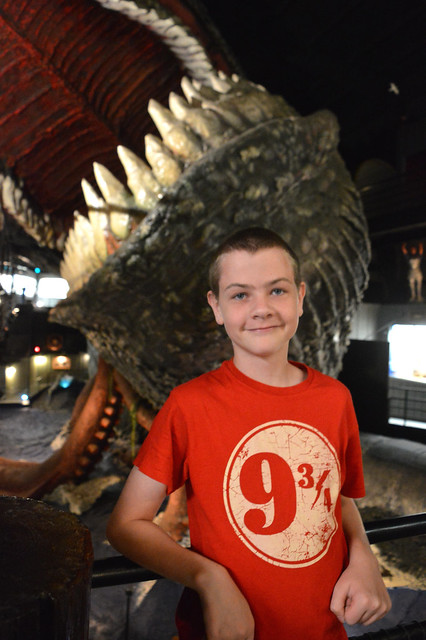 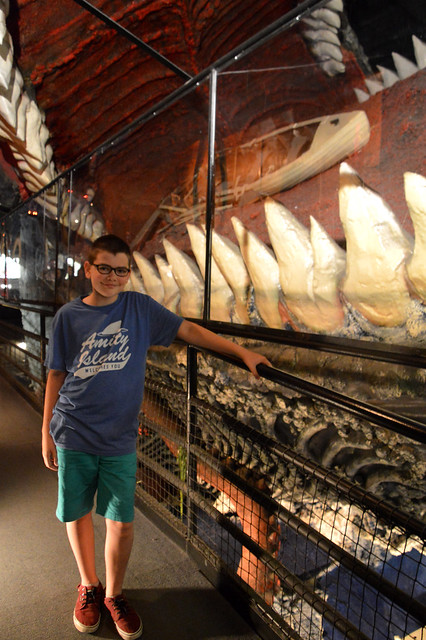 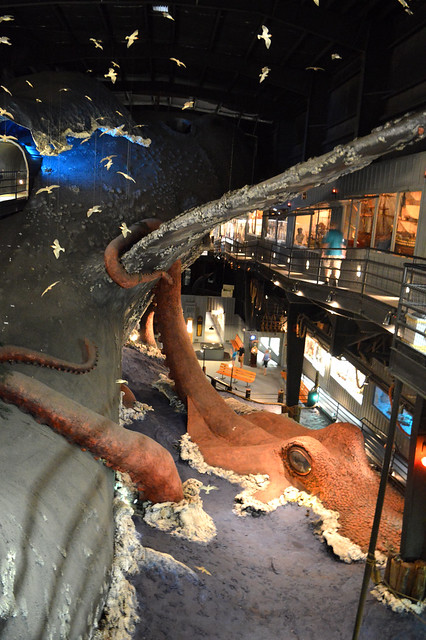 Yet another room was dedicated to a huge carousel.  It apparently contains 269 carousel animals.  I did not count them but I noted all manner of zoological beasties and mythological critters.  There were also hundreds more carousel animals on the walls and ceilings and accompanying them were mannequins.  The whole effect was weird and creepy and a bit dizzifying.  Another smaller carousel featured dolls and it was definitely creepy to look at. 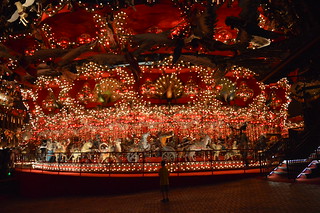 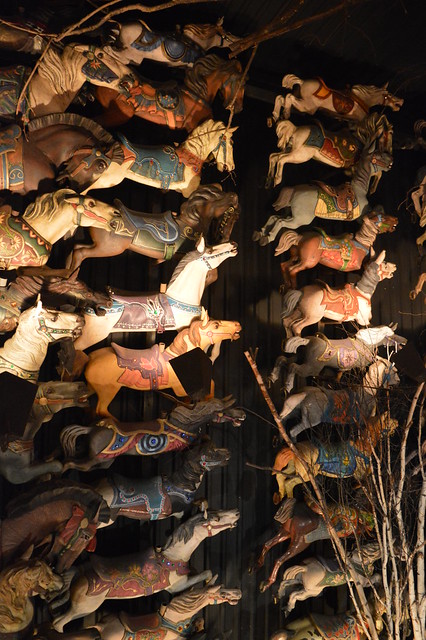 There were still more collections of creepy dolls, Faberge eggs, dolls houses, circus models, cars – including one covered in ceramic tiles and a steam-powered hearse – a model of Titanic, the inner workings of a huge clock face, taxidermy, rooms full of gigantic musical dioramas, a full size mannequin orchestra, the Four Horsemen of the Apocalypse dangling from the ceiling, a diverse array of puppets, all manner of automata, and armour for an elephant.  House on the Rock was definitely not a case of “less is more” and proof that there can be “too much of a good thing”.  We reached a point, probably four fifths of the way through, when our brains just could not absorb any more and when we started to feel the effects of being over-stimulated.  Our 11 year old rounded a corner to see a whole room stuffed full of arms and militaria with no exit in sight and collapsed on the floor in protest.  We, therefore, rushed through the final section of the House, which felt a lot like navigating a maze, and were relieved to pop out into the fresh air, bright light, and tranquility of the Japanese garden.  Overwhelming though it was, the House on the Rock was an amazing place and we were certainly glad we had decided to ditch Plan A so we could visit. 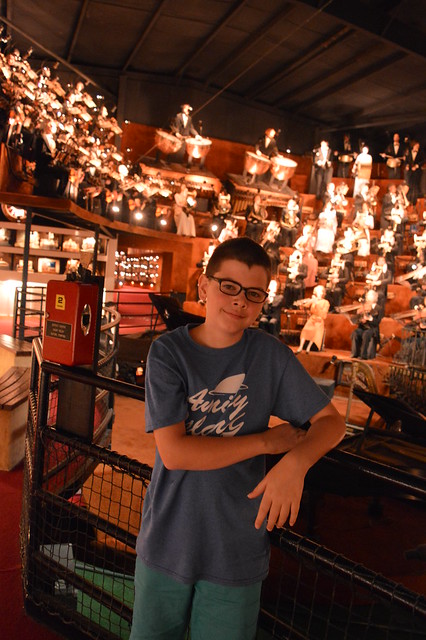 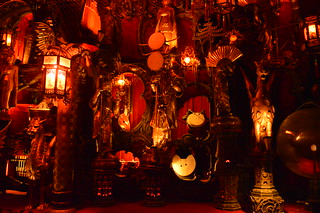 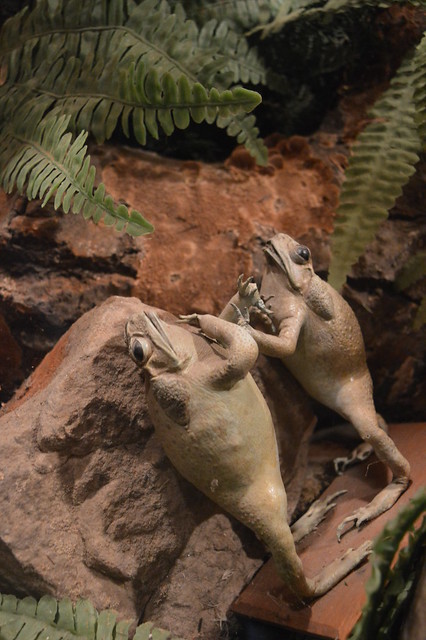 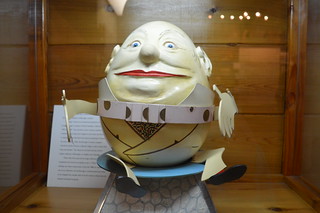 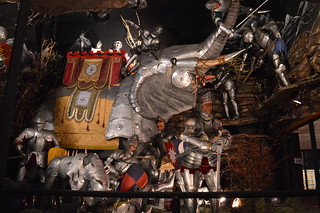 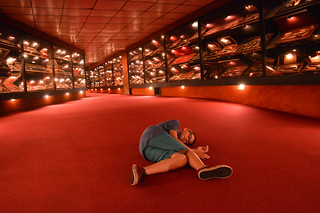 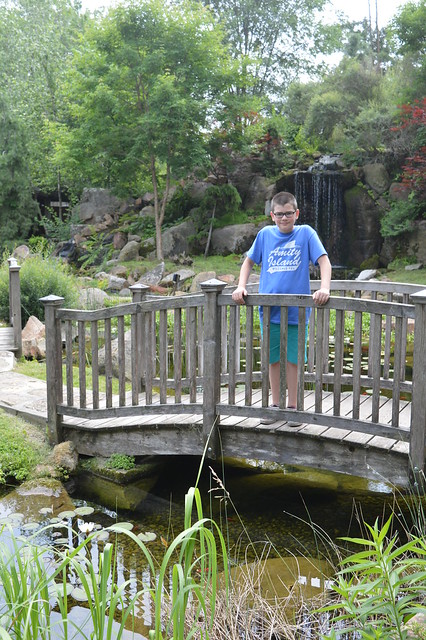