It has been our experience that the first and last days of any vacation with the kids are the most trying.  With the first day, it is all about navigating the transition out of routines into some degree of chaos and about managing expectations; with the last day, it is all about fatigue causing crankiness and an unconscious or conscious desire to return to familiar routines, a need to retreat back into the family cave for some hibernation after all the stimulation.

We, therefore, kept our final day of the road trip pretty low key.  We were travelling back to the Philly suburbs that day anyway plus had arranged to meet a dear friend for lunch so we only had the morning to fill.  We selected the Natural History Museum, part of the Smithsonian.  Actually, Mr Pict was keen for us to try a second visit to the Museum of American History since our first family visit there had been less than stellar.  I had cause to reference the Good, the Bad, and the Ugly in my blog post about it.  In the hopes that those issues had been resolved, we first headed to the Museum of American History, picked up a map, and discovered that absolutely nothing had changed since our last visit two years before.  Half the museum was still closed off due to renovation work.  We decided to jettison that plan (actually I was keen on jettisoning it as soon as it was the plan since our last visit there had been so cruddy) and move next door to the Natural History Museum.

We had not chosen the Natural History Museum for our last morning in DC simply because we had visited the Field Museum in Chicago just the week before and it felt like a repetition.  However, for that very reason it turned out to be a good choice.  As parents, we felt we could just relax and take a step back since we did not feel that same pressure to educate the kids.  We could just let them wander and engage as they saw fit rather than trying to guide them and focus their interest.

We started with a genuine Easter Island moai statue.  The boys had seen a plaster cast of one of these in February 2014 when we visited the Natural History Museum in New York city but this was the first time they had seen a real one.  It turns out this is because the Smithsonian owns the only two moai in America.  We then ascended the stairs around a group of spectacularly carved totem poles.  The boys enjoyed looking at the carved characters and reading the stories behind them.  The first gallery we visited was one exhibiting National Geographic photographs of Africa.  I love photography and the kids love animals so we spent some time admiring the images. 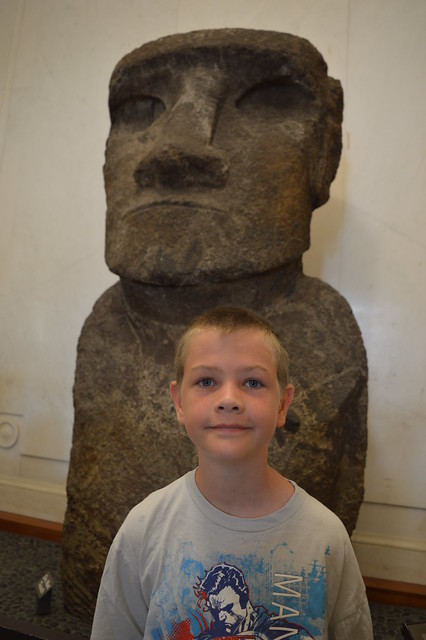 Our first proper destination in the museum, however, was the hall of gems.  As I have explained before, our 10 year old loves anything sparkly or shiny.  He has magpie DNA.  We, therefore, thought he ought to see the Hope Diamond.  This blue diamond is one of the largest and most famous precious stones in the world.  We told the kids it had a long, interesting and intriguing history to the point that it had been associated with a curse.  And then we took them in to see it.  And they were underwhelmed.  I think their vision of a large diamond was one the size of the palm of a hand or larger.  It was a failure of reality matching expectations. 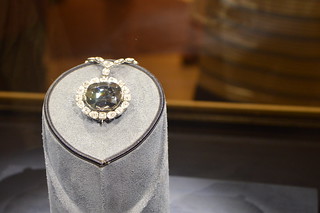 The rest of the gem and mineral collection, however, was a massive hit with the kids – and not just the one who likes sparkles.  They found the diversity of the minerals to be really fascinating and they wandered from case to case choosing favourites.  There were big chunks of quartz that contained bubbles like sedate lava lamps.  There were rocks that looked like Doozer constructions from beneath Fraggle Rock and shards that looked like they came from the Dark Crystal.  There were chunks of gems encrusted with other stones or minerals, such as a chunk of calcite sparkling with a thick seam of chalcopyrite.  There were other lumps of calcite that looked like elaborate desserts encrusted with sugary confections.  There were geodes on display that had been split open to reveal their colourful, sparkling contents – and I could see my 10 year old wanting to take a rock hammer on every nature ramble now.  There was an otherwise unprepossessing rock that had a wide mouth split to reveal lots of rows of white fuzzy mounts inside and which looked entirely like something Jim Henson would have imagined.  There were formations that looked like chunky frost or snowflake clusters.  A geometric piece of purple-red fluorite made my kids think of a set design for Tron or else something from Minecraft.  By contrast, there were pastel hued pieces that looked like petrified clouds or bubbly candy floss.  One enticing display case was filled with forms of gold and silver, thought it was a blobby chunk of copper that I liked best.  When the boys saw the case of glowing willemite calcite, the green glow made the boys think of it as having been spattered with Predator blood. The 10 year old was ecstatic about getting to touch a massive chunk of amethyst and now wants a chunk of his own.  I had never seen that child go as full Gollum as he did in that room full of gems and jewellery. 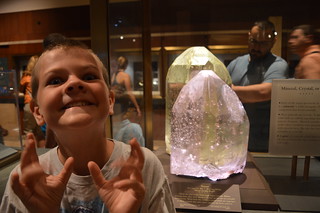 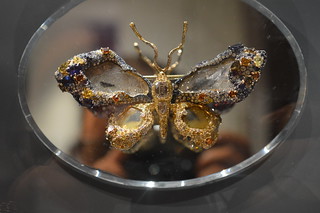 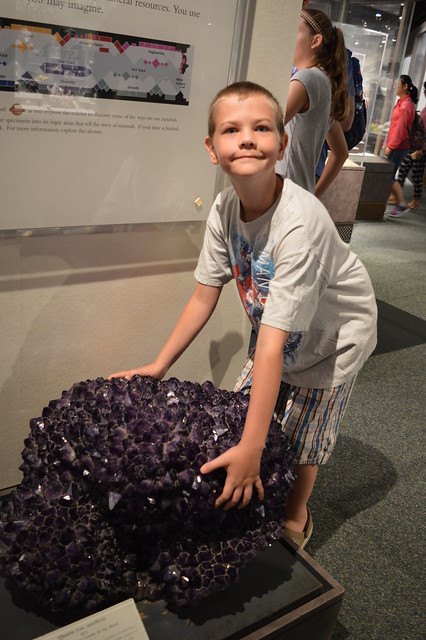 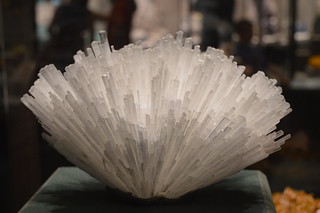 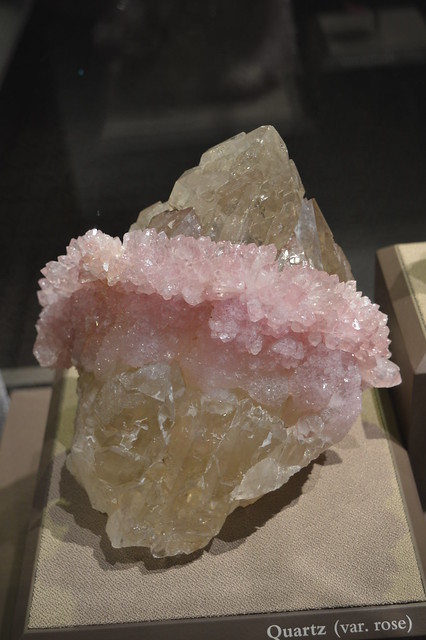 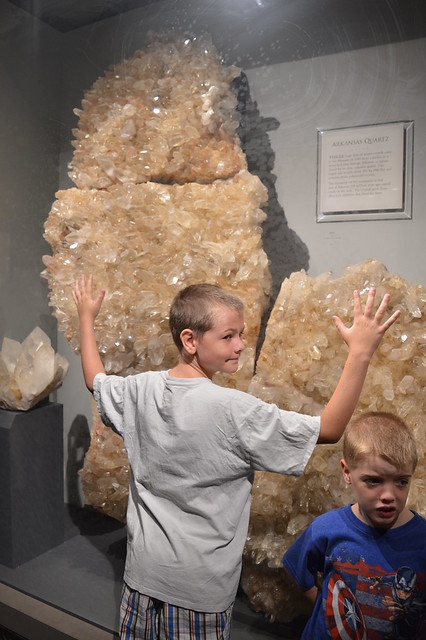 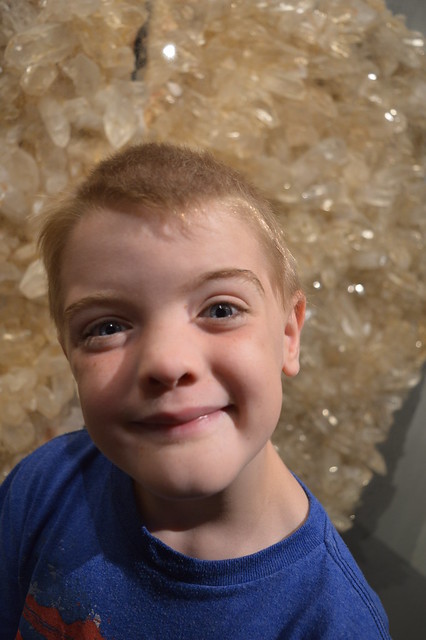 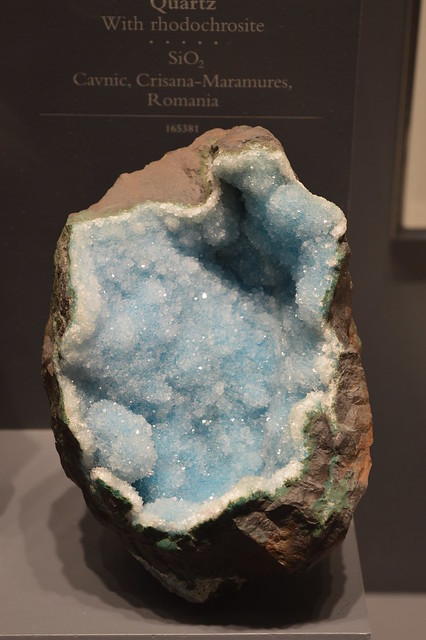 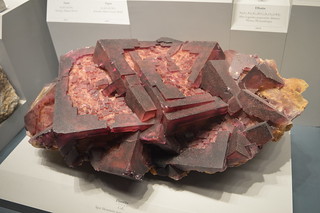 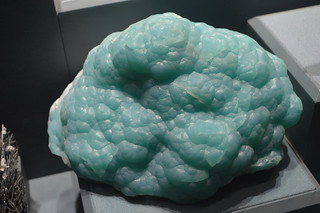 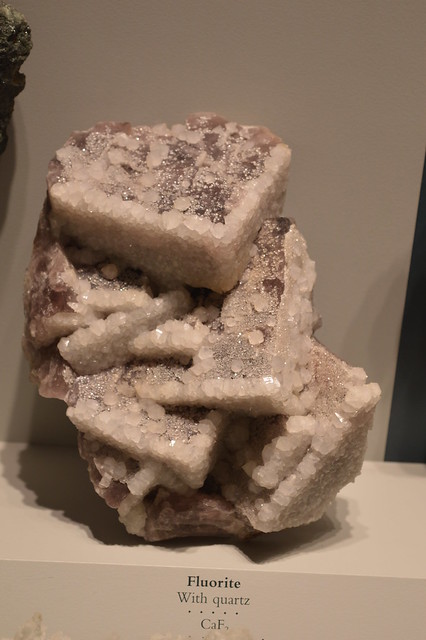 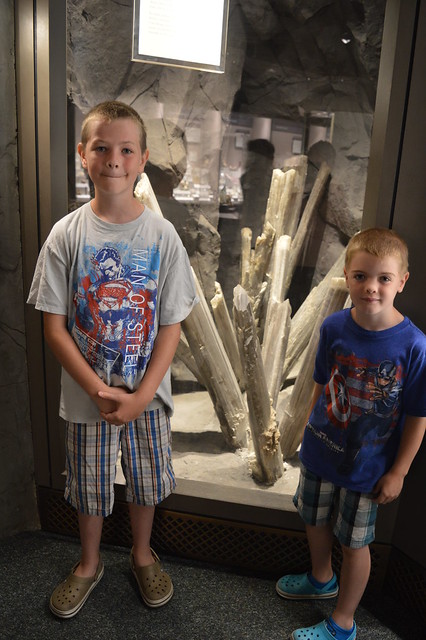 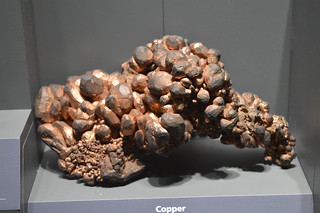 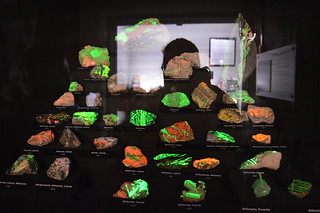 Next up – mainly because it was near the restrooms – we popped in to visit the dinosaurs.  We looked at the large fossil specimens of a T-Rex and a triceratops but otherwise, between the Field Museum and the Creation Museum, the kids had experienced quite enough dinosaurs for one vacation.  We, therefore, found ourselves a spot in the insect section.  The boys enjoyed seeing the cockroaches since we used to have Madagascan Hissing Cockroaches as pets back in Scotland but they also got to see a tarantula up close and some butterflies hatching out of their cocoons.  And then we were all museumed out.  Partly it was because our friend had arrived and it was time to head for lunch, partly it was because the museum was very crowded, but mostly we had just absorbed as much in the way of experiences as we cared to absorb for the fifteen days of our road trip. 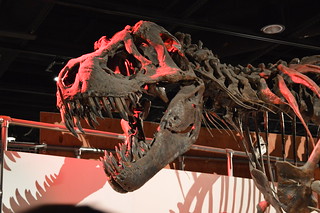 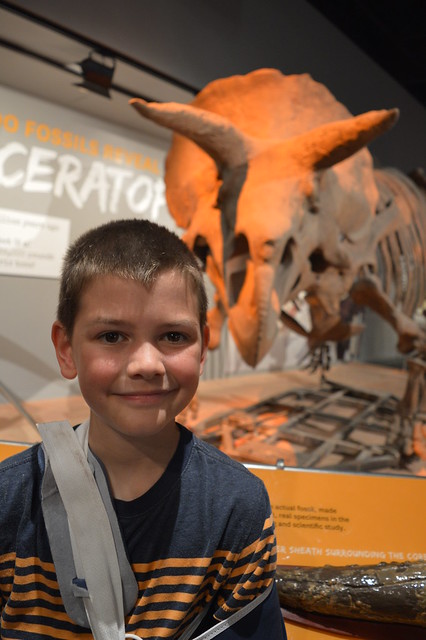 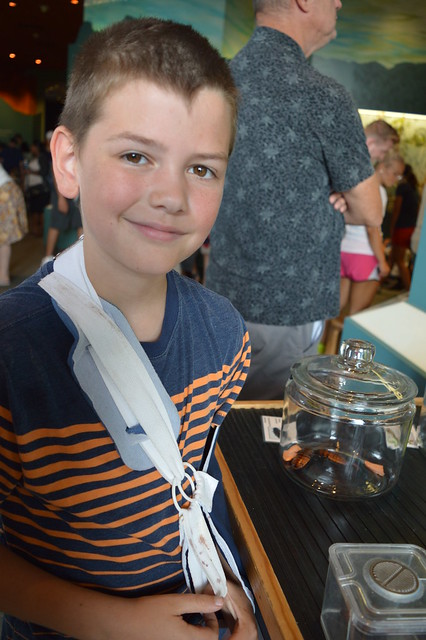 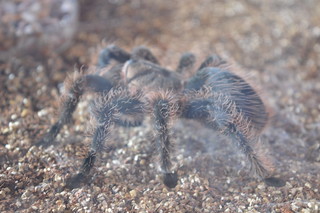 And so, after a tasty lunch with great company, after heading back to NoMa to pick up our car and luggage, a few hours’ drive to collect the cats from their cat hotel – to much excited squealing from the kids – we finally emerged from the car that had been our mobile home and tour bus for a fortnight and we were home.  And we were glad to be home.