Hokusai was the next artist we studied in our History of Art summer project.  We looked at his woodblock prints, especially his series The Thirty-Six Views of Mount Fuji.  The boys and I all loved a number of the prints but were all drawn to The Great Wave off Kanagawa and declared it to be our favourite.  We then discussed why that particular print is not only Hokusai’s most celebrated work but also why it has become so iconic.  We personally liked the fact that the print is almost monochrome and that the curving shapes of the waves lead the eye through the image while also framing Mount Fuji.  I also like the fact that the wave dominates the image while the tiny figures, clinging to their boats, are almost lost in the composition, suggesting the power of nature versus the powerlessness of humanity.  Unsurprisingly, we all chose to create version of the Great Wave in the creative part of the lesson.

You will have noted that it is either Minecraft or penguins with my oldest son so I was not in the least bit surprised when he decided to depict penguins in his drawing.  The penguins are surfing and the sun has become some sort of monster.  He did manage to include Mount Fuji in his drawing.  He had noted Hokusai’s calligraphy in a box within the print so he researched how to write “penguin” in Japanese characters and added that to his drawing.  At least, he tells me it says “penguin”. 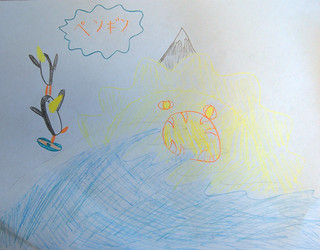 My 8 year old also went with the surfing idea.  I think the figures are either superheroes or ninjas but one is riding a surfboard and one is riding a sea serpent.  I like the fact he has turned Mount Fuji into a character. 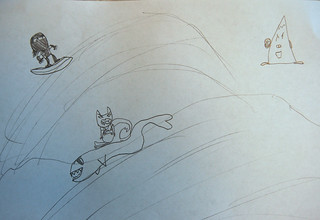 My 9 year old went a bit mythological with his drawing.  He depicted Neptune commanding the waves so that a figure in the foreground can surf. 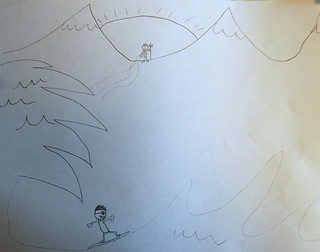 My 6 year old and I decided to do something a bit different and got out the gelli plate so we could produce some prints.  We used paper to create our own wave shaped masks and stencils with mixed results: they worked very effectively at first but soon ripped when they became soggy with paint.  My 6 year old achieved some really lovely textures with his print and some pleasing sweeping curves with his wave shapes. 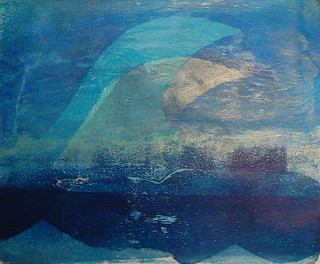 My youngest son’s gelli plate print was actually far more effective than mine.  My composition was not as effective and, while I had some areas of lovely texture, there was not enough definition between areas of colour.  I decided, therefore, to embellish my print.  Oddly this is not something I had done with gelli prints before.  I normally use the gelli plate to produce papers for collaging with rather than to produce compositions.  I used various shades of blue and white acrylic paint to make the wave shapes more distinctive.  I love using dots in my art work so I used different sizes of dots to create a visual echo of surf and white horses capping the waves.  I used a metallic blue paint for the dots which, along with a pearlescent blue used in the gelli print, created a nice shimmer to the finished piece. 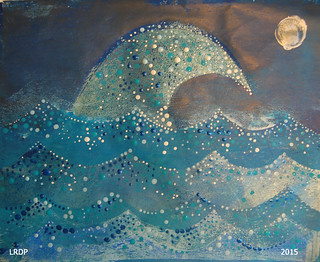 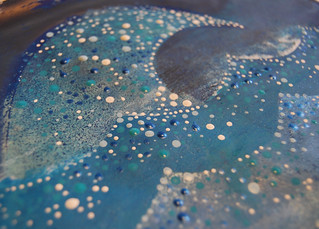 If you would like to see my Great Wave inspired Crazy Bunny over on my art blog, please click here.