We had a very busy, fun-filled Spring break last week.  Mr Pict took some time off work which meant we could undertake family expeditions, hit the road, and explore some places in the vicinity that we had not yet been to in the almost two and a half years since we arrived in America.

First up was a trek out to Hummlestown to visit the Indian Echo Caverns.  While my kids have been inside caves and down mines, this was their first time visiting caverns so we thought it would be a pretty cool trip.

The caverns are accessed by going on a guided tour.  Our guide was named Andrea and she was great: enthusiastic, knowledgeable, engaging, and pitching the talk just right for the spread of ages in the group.  She led us down to the mouth of the cave, near the banks of the Swatara Creek.  Everyone Ooohed and Aaahed as soon as we stepped inside and saw the stalactites and stalagmites lit by the orange glow of spotlights.  That was nothing compared to what was to come, however. 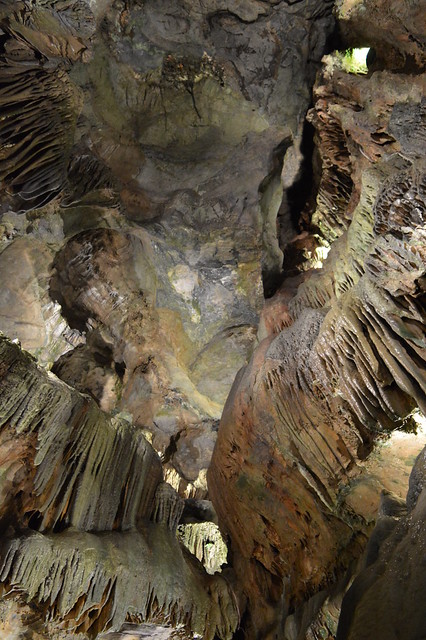 We were led from chamber to chamber in the limestone cavern and Andrea explained the science behind the formation of the flowstone structures, the way the calcite is deposited over time, pointing out places where visitors from a bygone era had touched the rock over and over and effectively killed the flowstone, and pointing out interesting structures – including one large stalactite that most definitely looked like an ear of corn and a tiered wedding cake.  She also paused in one chamber to tell a fairy tale that used formations in the chamber, including a dragon and a wizard, as its cast of characters.  This really helped hold the kids’ attention. 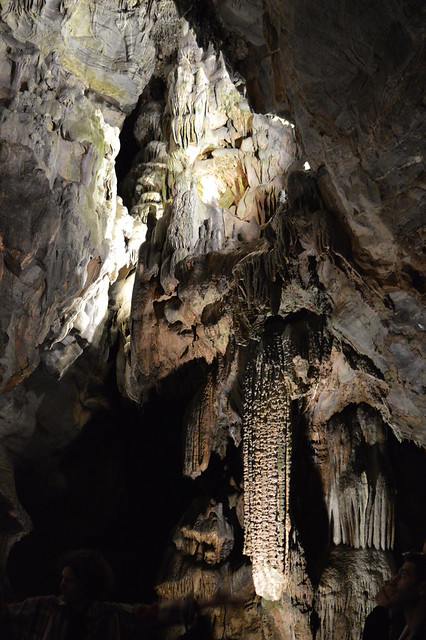 With uneven, sodden ground, which was slippery underfoot at times, minimal lighting, and narrow passageways, we had a little taster of what it must feel like to explore caverns for the first time.  Our guide pointed out that earlier visitors would have used much more precarious routes in and out of the cavern and between chambers.  I was very glad that the modern routes had been carved out since the caverns became a tourist attraction in the 1920s.  At one point, the guide cut the lights for a few minutes so that we could all experience total darkness.  The boys thought that was totally cool. 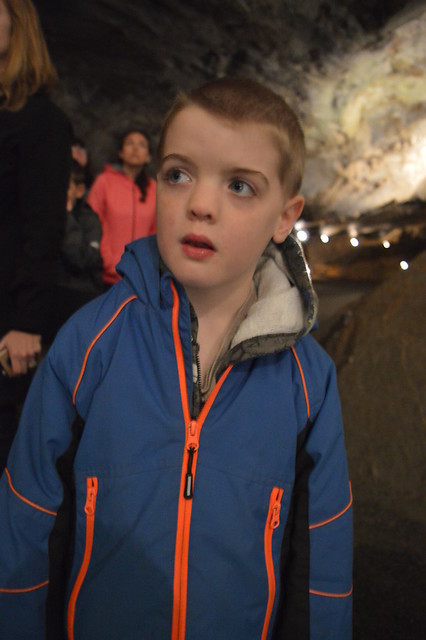 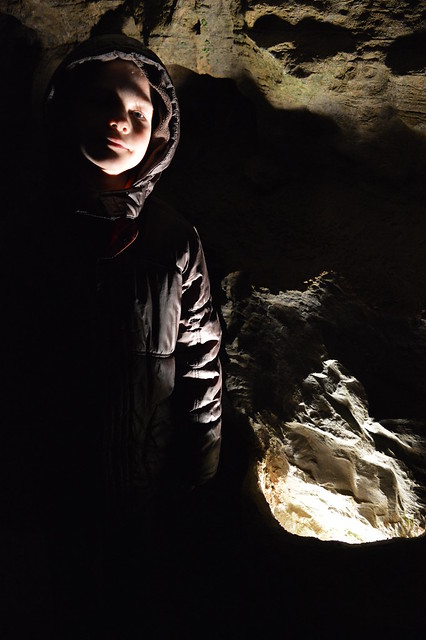 Most impressive were the wedding chamber, with its layers of pale, glistening calcite, dripping like icing from a tiered cake, twinkling in the light, and the chamber that gave us a view of a crystal clear lake.  Those areas were pretty magical and otherworldly. 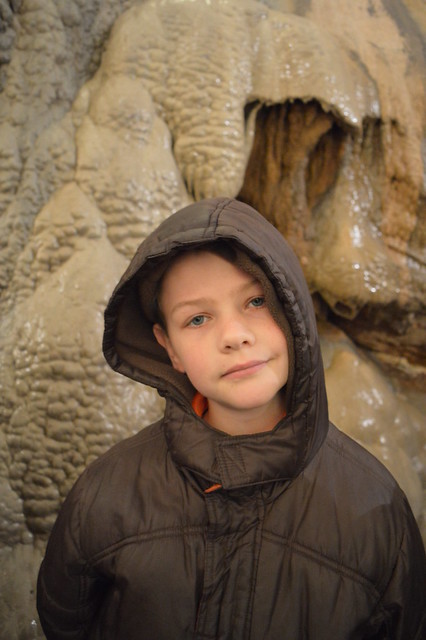 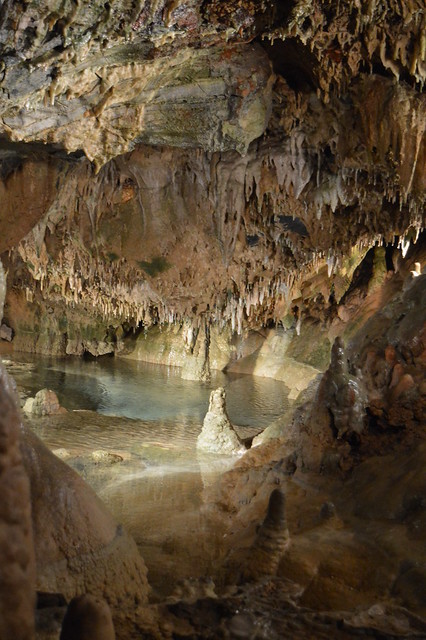 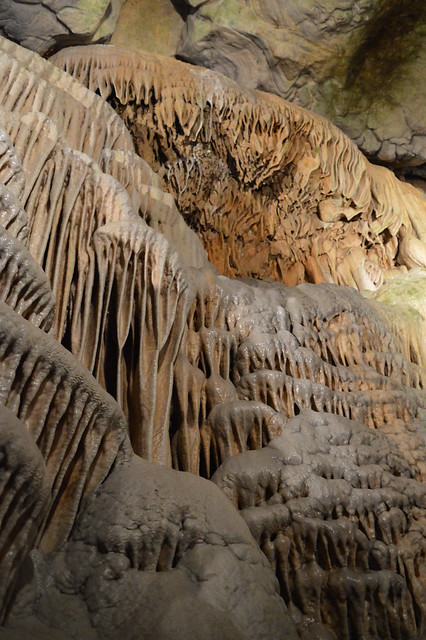 Most poignant, however, was the tale of William Wilson who had lived in the caverns as a hermit for the last 19 years of his life.  Andrea pitched the story at family friendly level, mentioning a tragic bereavement that had led Wilson to flee civilization and company and seek out the solitude offered by the cavern.  She showed us the ledge where Wilson had slept and the still visible soot from where he had made fires to heat water and cook food.  It was pretty emotive stuff even without the full story. 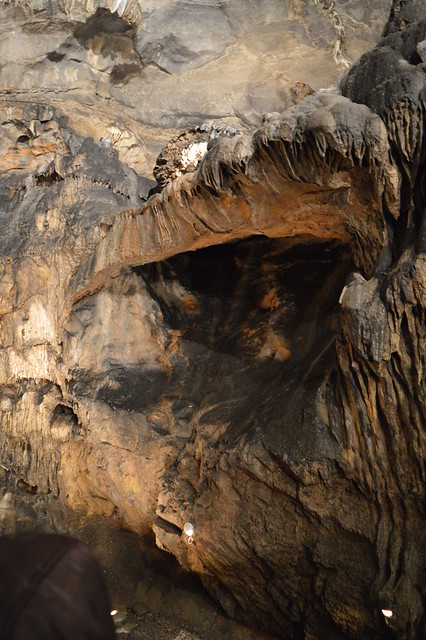 The full story, however, was terribly tragic.  William’s sister Elizabeth was found guilty of murdering her twin sons and sentenced to be executed.  Believing her to be innocent and her lover to be the guilty party, a pardon was sought and eventually granted.  The delivery of the pardon was entrusted to William but fate was not on his side.  The ferry across the Schuylkill River was not operating because of terrible weather so William drove his horse into the icy water and then finally swam across.  He arrived minutes too late.  Elizabeth had been hanged.  This then was the horribly tragic event that had led William to live as a hermit in the caverns from 1802.

The presence of children in the group was probably the reason why the guide told us an abridged version of the Pennsylvania Hermit’s sad tale though I expect my kids, lovers of the lurid and macabre, probably would have been spellbound to be told the tale while in the cold and dark of the caverns.