The last of my Mixed Media Mythology lessons was taken by Sarah Leonard.  The subject of this final lesson was Vesta, the Roman goddess of the hearth and home.  Because Mr Pict is a complete and utter nerd about ancient Rome, I was very familiar with Vesta (and her Greek counterpart Hestia).  Vesta was both the oldest and the youngest of the major gods in that she was the first born child of Kronos and Rhea but the last to be released from her father’s stomach when Jupiter killed Kronos and freed his siblings.  She chose to remain a virgin (hence Vestal Virgins) and she took care of Jupiter’s house for him, which leads to her association with domesticity.

The thing I particularly appreciated about Leonard’s lesson was that it was about translating concepts, ideas, connections into a visual medium.  I liked the flexibility and freedom that afforded.  Therefore, as happened with my response to Leonard’s lesson on Freya, my art work massively diverged from the exemplar.  My painting is mainly watercolour with some ink and I worked in shades of brown to reflect my home, which is mainly neutral, natural colours.  I painted the “hearth” bowl copper (acrylic) because my living room has a large copper trough beneath the window.  The flames are collaged scraps of gelli print and the embers of red and gold are spatters of acrylic.

I focused on Vesta’s connection to the hearth because for me a fireplace has become an important element of a house feeling like home.  We had our last home, in Scotland, built for us and as such I designed the fireplace.  It was more of an emotional wrench for me to leave that fireplace behind than it was to leave the rest of the house.  One of the reasons why our current house particularly appealed to me was that it had a fireplace I could envision us sitting around in winter.  My painting of Vesta, therefore, does stick to the lesson brief in being about domesticity. 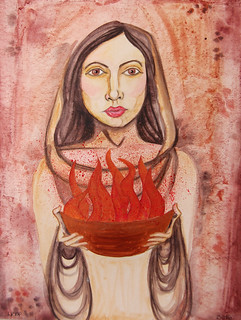