So far my Inktober sketchbook includes a Phantom and a Ghost but I decided I needed to up the creep factor with my drawings of spectres.  I wanted to try and illustrate the kind of ghostly figure you really would not want haunting the dark corners of your home.  Is it just me or did she end up looking like some weird fusion of Bette Davis and Joan Crawford? 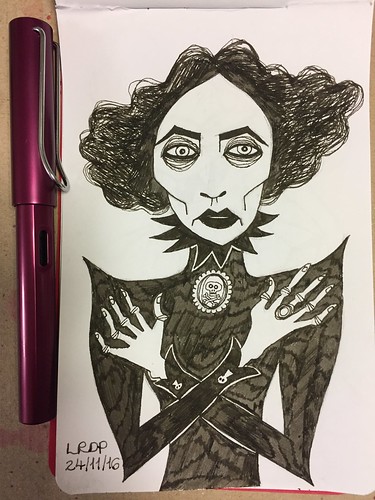 Having kids is often like running a long term psychological experiment.  Whenever I have the opportunity to take a step back from the coal face of parenting, I find it fascinating to study these wee creatures I share living space and DNA with.

Sometimes those imaginative games cause a bit of havoc.  For example, some years ago, in a village churchyard in England, my boys decided to entertain themselves while I wandered around the graves.  Inspired by a war memorial, they decided to reenact trench warfare using daisies versus buttercups in the long grass.  It was all fun and games until one of them bellowed, “Die, Germans, die!” – at the exact moment that a bus full of German tourist disembarked into the church yard.

On a more domestic level, one of my children once delayed leaving the house because he was packing his invisible backpack full of invisible items he might need for the trip.  I  became increasingly frustrated as I watched him scuttle up and down stairs several times having forgotten his invisible sword and invisible helmet.  “Can’t you just imagine that you didn’t forget?” I pleaded.  In vain.  Then there was the time they had a ferocious argument over the unfair distribution of invisible sweeties.

It was, therefore, bound to go a bit crazy when the younger three decided to make up a resident poltergeist for our house.  Alas, it may have been me who inspired them.  I am one of those mothers who ask (or yell) rhetorical questions in a futile  attempt at making my kids realise they have done something annoying.  Then there are the interrogations where nobody confesses and I have inadequate evidence to press charges.  I like to snark, at no one in particular, “Well if none of you did it then I guess the ghost is to blame!”  Obviously, therefore, they needed a ghost to blame.

That is how Joey appeared.

At first it was quite amusing.  The boys created this whole tragicomic backstory for Joey to explain why he was haunting our house.  Any mischief was, of course, down to Joey but the  kids accepted that wraiths cannot be directed by furious mothers to put things right so they would have to help Joey out.  Joey trashed the bedroom.  Oh well, you kids will just have to tidy it all back up again.  Joey doesn’t want us to eat this dinner because it looks gross.  Oh well, Joey will just have to watch you go hungry then.

Then the night time nonsense started.

They couldn’t get to sleep at night because Joey was keeping them awake.  They were too scared of Joey haunting them to be able to sleep with the light off or without sharing a bed.  That got old really quickly.  There are child-generated nonsenses I can cope with and manage during the day that I just cannot tolerate when I am frazzled at the end of the day and especially if I am both frazzled and sleep deprived.

“You do understand that Joey doesn’t exist, right?  So he cannot possibly be haunting you?  So you have nothing to be scared of?”

Agreement would be nodded.

“But I am scared.” Throw in some puppy dog eyes and a lip quiver for maximum effect.

“You do remember that you all made Joey up, right?  He doesn’t exist except in your imagination?  Because you made it all up? So there is no ghost.  Go to bed.  Stay there. Go to sleep.”

Finally their imaginations moved on to new things and Joey was forgotten.  It was as if an Exorcist had been around.  Thank goodness.  No more nocturnal whimperings about being haunted by a ghostly boy.  No more being haunted at night time by our own kids.

Then, just last week, Joey was back.  A sequel to the ghost story.

Snuggled up on the sofa with the kids watching a movie one evening, my 9 year old looked stricken towards the window, raised a finger to point, and said, “Joey’s face is at the window”.  And it all started again.  Sigh.  Joey, who had been forgotten, was firing up their imaginations again.

Powerful imaginations are great.  I just wish I could switch them off and power them down every evening.