My youngest son had major oral surgery yesterday so he was off school and I was off work.  While he was snuggled up on the sofa recovering from the anesthesia, I sat with him and worked in my art journal.  I had to keep things quick and simple as a result of the context.  Inspired by this week’s Art Journal Adventure prompt of “birds and blossoms”, I bashed out this rapid illustration of myself in bird form.  The scaffolding is my go-to doodle self-portrait that I just tweak and adapt as required.  So, for instance, this time I gave myself very round glasses to be more bird-eye-like and obviously I replaced arms and feet with wings and talons.  My son asked if I was drawing myself as a wise owl or a harpy.  And that, folks, probably tells you as much as you ever need to know about my parenting modes. 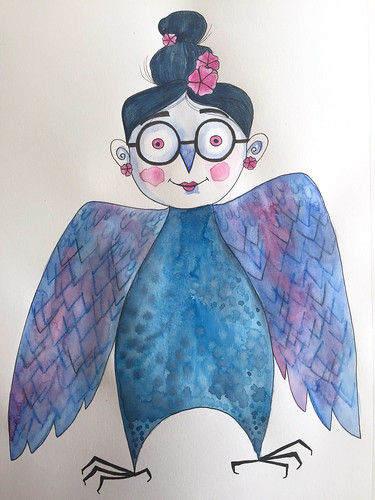 The Harpies were a flock of mythological women with the bodies of birds and human faces.  Harpies seem to have been the urban pigeons of the classical world.  A king of Thrace named Phineus was punished by Zeus by being placed on an island with a massive buffet of food.  Not sounding like much of a punishment?  Well the thing is that he could never eat the food because the Harpies would sweep down and snatch it from him (city seagull style) and poop all over the rest of the food.  No, Phineus!  That is not ranch dressing on the salad!  The Harpies were sometimes also deployed to punish folk who were being dragged off to Tartarus, the area of Hades reserved for the worst of the worst.

When embarking on my sketch, however, I was thinking about the more modern usage of the term “Harpy” to mean a woman who has been deemed to be unpleasant and nasty.  The misogyny of that – the fact it is only ever used to refer to a female – gave me a different perspective on the harpies.  A thought began to form in my mind’s eye of this group of admittedly strange women who are on the periphery of their society, employed by it to do really nasty jobs, fulfilling the bidding of others, but excluded and reviled.  I, therefore, thought of the Harpy being on the edge of things, looking on mournfully at something she could never participate in, denied the joy and pleasures of others.  I admit that it brought to mind the horror of school discos, which I always fought to never attend, because they were always just a loud and brash way to establish the school’s pecking order while being made to listen to hideous pop music.

This, therefore, is my Harpy, sitting at the edge of the disco, watching on as others cavort and enjoy themselves, but never participating, never feeling involved.  Fed-up.