The next lesson I tackled in the Mixed Media Mythology course was another by Lucy Brydon.  This time the subject was Halcyone (or Alcyone) whose tale in Greek Mythology is one of hubris, punishment, loss, grief, and metamorphosis.  It is from her that the phrase “Halcyon Days” derives and she is also associated with kingfishers.

The lesson involved creating a splodgy, inky background.  I really enjoyed creating it though it possibly ended up being a bit too vivid and bold in comparison to the figure.  As the instruction was to draw a female profile and incorporate a kingfisher, my mind flitted to the Phoenix Woman painting I produced a short while ago and I decided to go with a similar composition.  I also borrowed from it the idea of making the kingfisher a type of headdress rather than attempting to paint a separate bird.  It helped me avoid having to paint a realistic bird but I also thought it might work thematically in terms of Halcyone’s transformation. 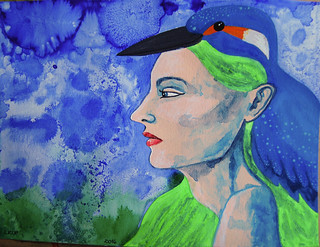