My schedule was utterly slammed this week.  Every space on the wall calendar was crammed with appointments and commitments and things that needed to be done.  I thought there was not the remotest chance I was going to get to even view this week’s Life Book lessons let alone sit down and do something creative.  However, two things happened this week that utterly jiggered my schedule and caused a great deal of hassle – one of my kids was off school sick for two days and then we had a snow day – but which actually meant I had more time stuck at home.  More time at home meant I could actually get stuck into the lesson and art time was probably just what I needed to take the edge off the stress of a totally bonkers week.

The lesson was taken by Tamara Laporte.  Tam always provides wonderfully in-depth videos for her lessons but there was no way I was going to find time to both view the videos and then still have time to create.  I, therefore, read the accompanying PDF, modified the lesson by eliminating certain stages, and got stuck in.  The crux of the lesson was a self-portrait scaffolded on an image transfer.  I have never had much success with image transfers but I thought that was precisely why I should have another crack at it.  The outcome was not ideal – I think I spread the gel medium too thinly in places – but is definitely the best I have produced so far so represents progress. 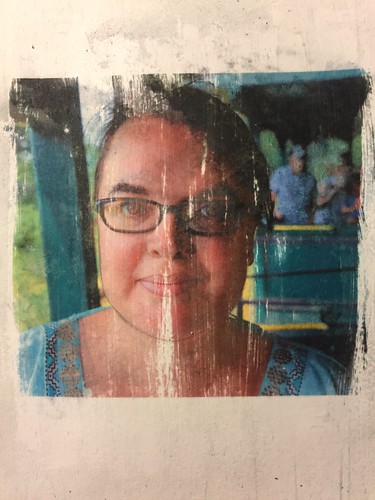 I then proceeded to paint on top of the image transfer and this was where I diverged from the lesson.  I did not have time for layer upon layer of media so I limited myself to acrylic paint, Neocolor II crayons, and Inktense pencils and blocked in areas of colour and built up the detail of my face. 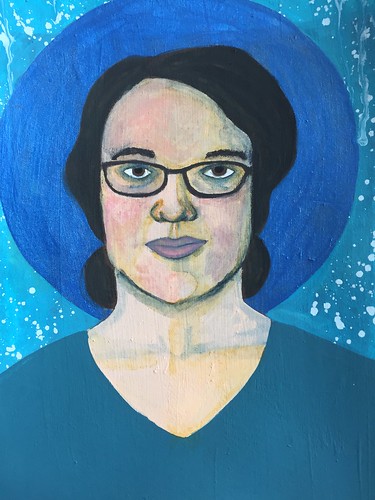 The idea of the painting was to include personal, symbolic elements and text alongside the self-portrait.  It is not really my thing to be that personal and emotional with my art work.  Art is definitely therapeutic to me but only in terms of the act of creating.  I don’t need it to be a form of processing and expressing my thoughts and feelings and I am also too intensely private.  I decided, however, that the self-portrait did need some finishing touches so I added some collage elements in the form of butterflies and leaves formed from text pages.  All of those things could be interpreted as things that are important to me as a person – words and learning, growth, and change. 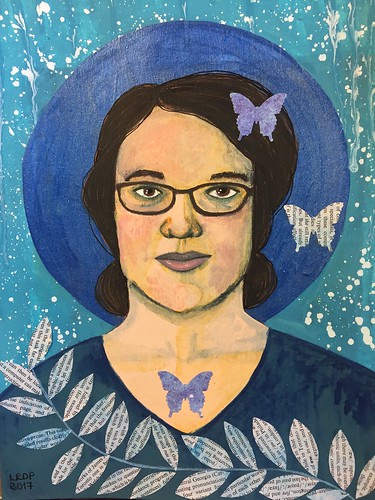 Today marks exactly three years since my four children and I stepped off a plane from Britain to join my husband and their father and embark on a new life in America.  Three years is a weird way-marker because in some ways it feels like we have not been here that long and in other ways it feels like we are way more established here than we would be after a mere three years.  We are inbetweeners.

Looking back, I think the first year of life here was very much about just surviving.  Back then I was so focused on getting through each day and each new challenge that I could not distance myself enough to have adequate perspective to recognise that we were just surviving.  I was just putting one foot in front of the other, sometimes stumbling, but mostly moving forwards.  However, so much has happened in these first three years that have helped us put down roots and start to feel settled here.  We bought a house – which was a massive deal for starting to “belong” – and everyone got settled into rhythms and routines, adjusted to new schools and work places, made new friends, developed new traditions to meld with the old ones we imported from Scotland, passed driving tests, and the children officially became American citizens.  Now I alone am the only Green Card holder, the only alien.

All of these things mean that we are well out of survival territory.  But nor are we quite thriving here yet or at least not in every area of life.  The transition takes far, far longer than one could ever anticipate.  It’s a long journey.  And there are road bumps.  And tolls.  And wrong turns that need to be corrected.  We are still moving towards the same fixed destination but it is just taking a bit longer than we expected.  So, to mix my metaphors, we are in this weird No Man’s Land between Surviving and Thriving.

Long time readers might recall my Lego nightmare and how it became a metaphor for our immigration experience.  I am happy to report that most of the Lego sets have now been rebuilt and are displayed on shelves and played with regularly.  However, there are a few sets left to build and there are some that are going to be extremely challenging to rebuild because it seems that some critical pieces are missing.  We will get there with the Lego and with the feeling of being settled enough to thrive.