This has been a horrible winter.  It has not actually snowed much but instead we have had to contend with various pestilences and too many rainy, miserable weekends.  While I do enjoy hibernating a bit over winter, cabin fever definitely set in.  I desperately needed some fresh air and exploration for the sake of my mental wellbeing.  This past weekend, therefore, we took advantage of a dry day to go and visit the Grounds for Sculpture in Hamilton, New Jersey.  We had previously attempted a visit there but it was Labour Day weekend and all of the tickets for the day were gone by the time we arrived.  This time we prebooked to be assured of entry, though in reality it was pretty quiet. 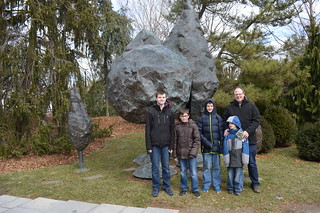 The Grounds for Sculpture is essentially an outdoor exhibition space for sculptures by a variety of artists.  The museum was founded by artist Seward Johnson.  I must confess that his was not a name I knew but it turned out I did know some of his sculptures.  The one most people can probably recall to their mind’s eye is ‘Double Check’ which depicts a seated businessman looking through his briefcase.  It was captured in an iconic photo of 9/11 as, covered in dust and debris, it looked no different from the real people making their way through the streets after the towers collapsed.  A replica of that statue greeted us as we entered the Visitor Center. 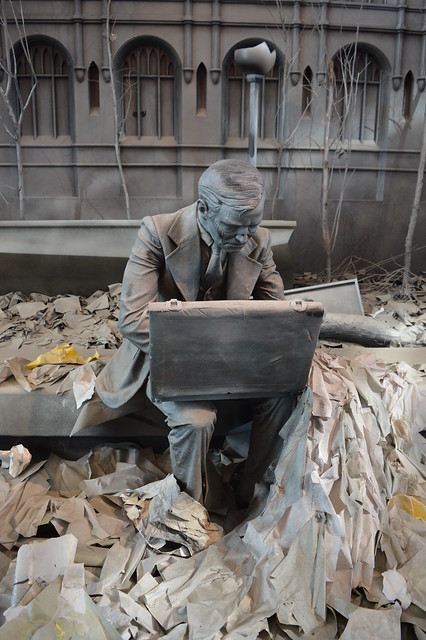 The Visitor Center showcased some of Johnson’s other works too, such as his Marilyn Monroe based on the famous photo of her from ‘The Seven Year Itch’, a group of musicians, and a styrofoam sculpture of a reclining girl that was painted to look like it was made from marble and chrome.  What was a big hit with the boys, however, was a room made to look like Van Gogh’s painting of his ‘Bedroom in Arles’.  We all enjoyed the feeling of having stepped inside the painting and be seeing such a famous work from a different perspective. 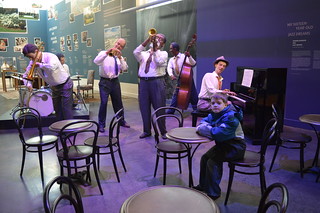 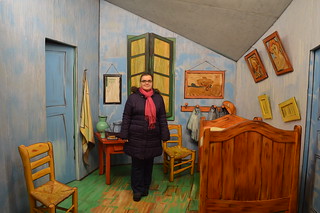 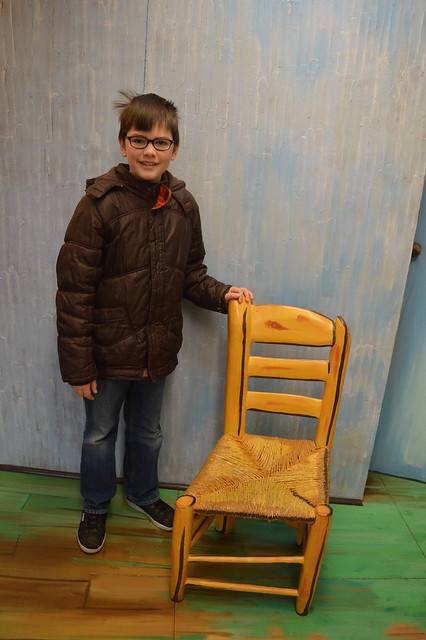 The vast outdoor space contained hundreds of sculptures.  Every pathway brought us to a different art work and we enjoyed the almost “treasure hunt” aspect of finding some of the statues that were partially concealed behind bushes or were only accessible by following a small path.  Some statues made the kids chortle, including one of a man urinating into bushes and a very phallic obelisk.  I enjoyed the variety of art works on display, from the abstract to the kitsch, from the ones hewn from natural materials to the brightly coloured ones crafted from manmade materials.  We all enjoyed the oversized, three dimensional versions of famous Impressionist paintings because of that feeling of being able to magically step inside a painting.  We also enjoyed the celebration of kitsch and the fact that many of the statues could be touched and interacted with as adjacent signs specified that they could be respectfully touched or even climbed on.  I believe one of the mission statements of the Grounds for Sculpture is to engage more people in public art so it was great to be able to let the kids feel the texture of a bronze sculpture or hang out with Renoir’s party-goers. 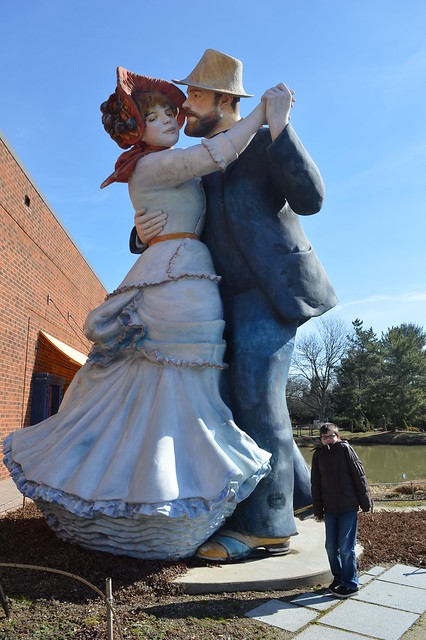 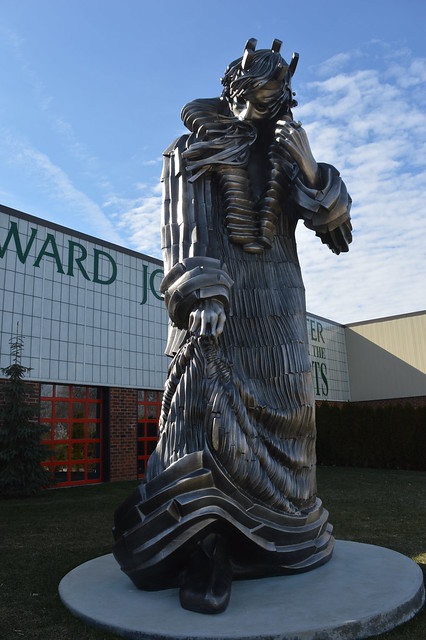 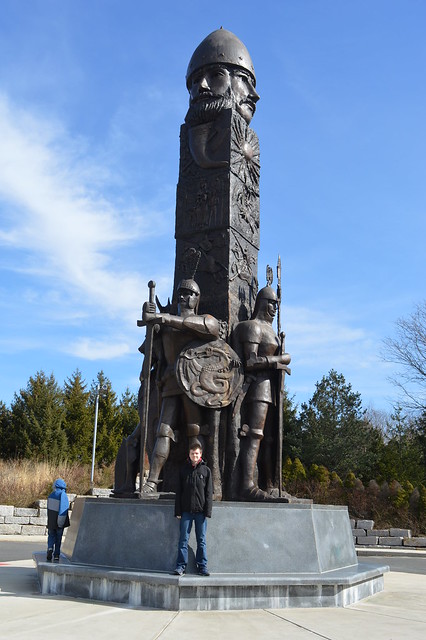 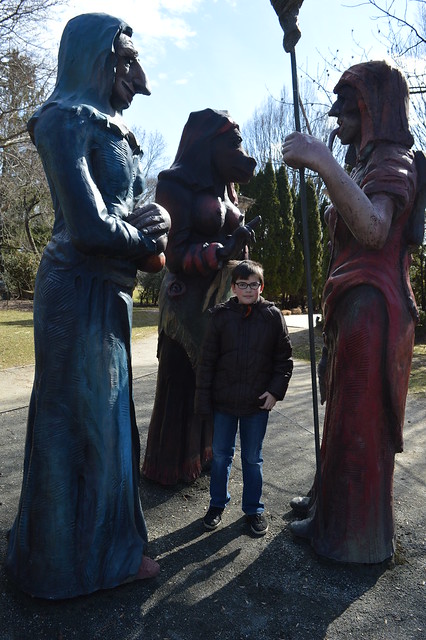 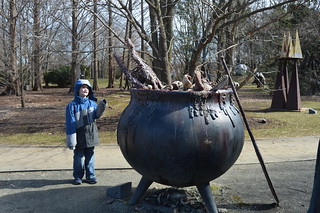 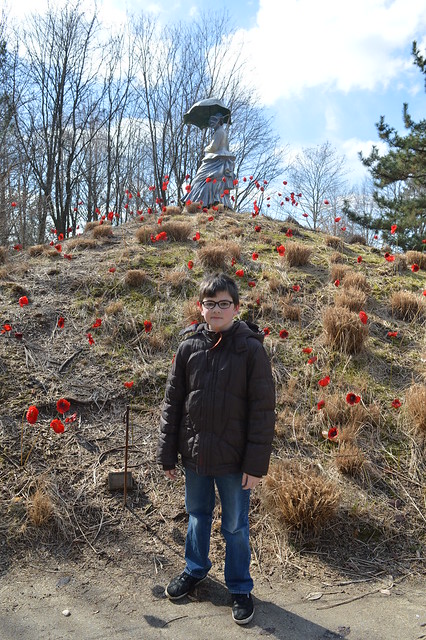 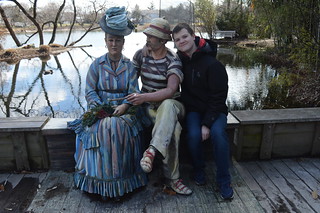 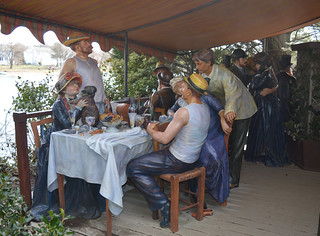 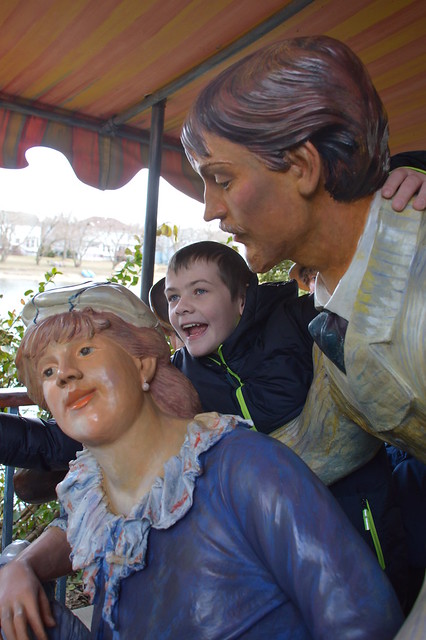 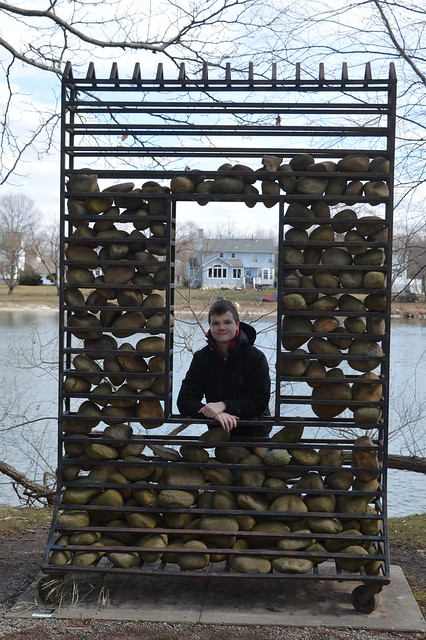 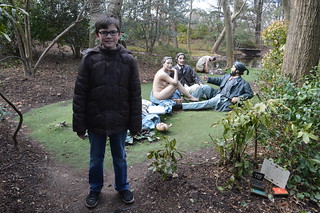 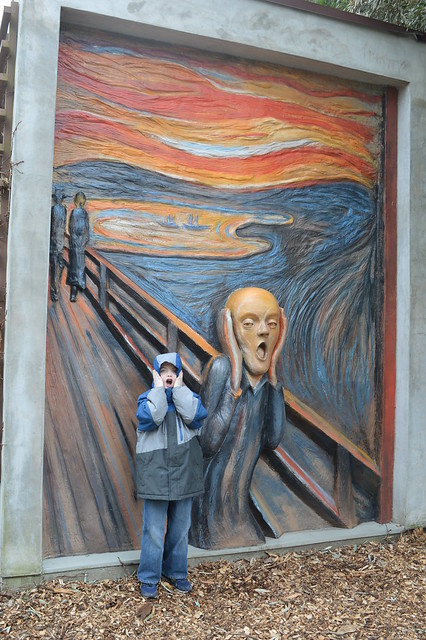 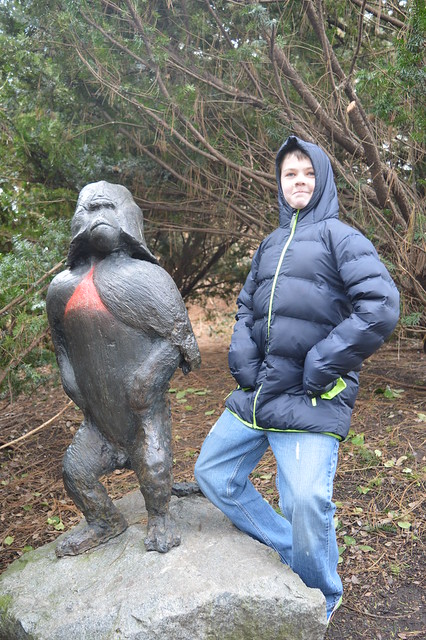 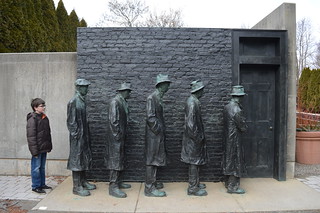 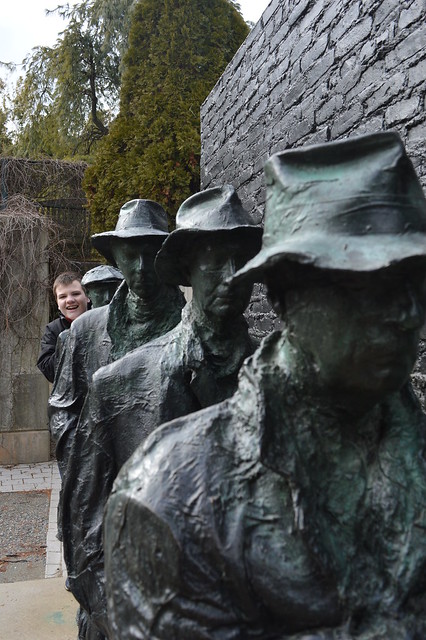 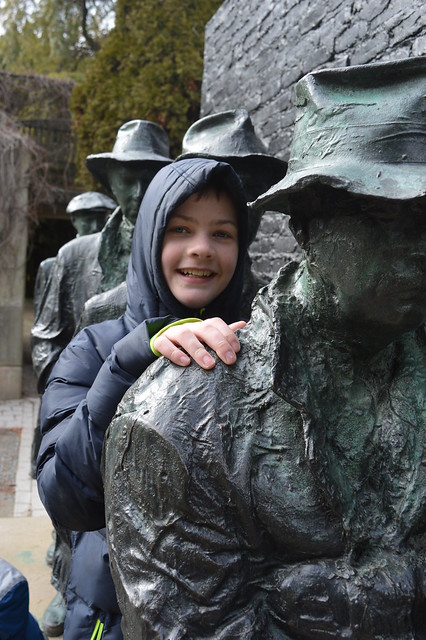 The grounds themselves were lovely, very peaceful, filled with trees and plants, and peacocks.  There were also some nice buildings dotted around and bodies of water and arching bridges.  I can imagine that the whole place looks even more appealing in other seasons when there is more colour and leaves on the trees.  Since the Grounds are spread over 42 acres, we had lots of opportunity to wander and run around and explore.  However, even though we were there for a few hours, we did not manage to see everything.  We will absolutely have to go back some time. 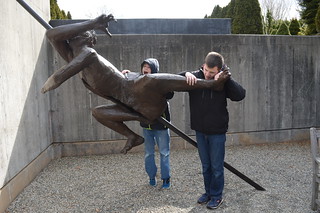 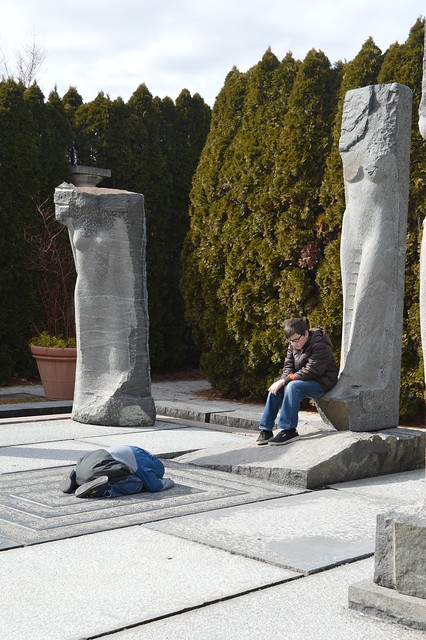 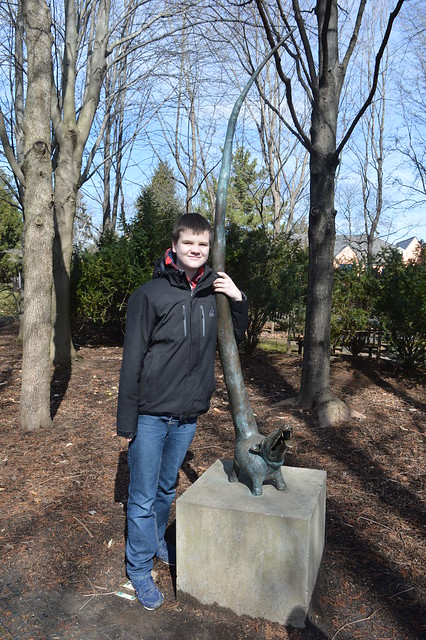 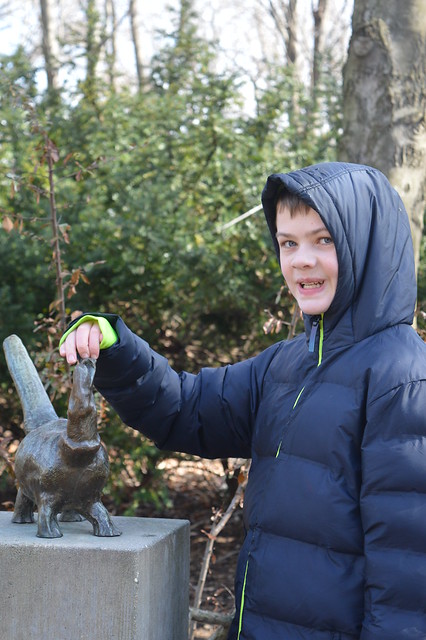 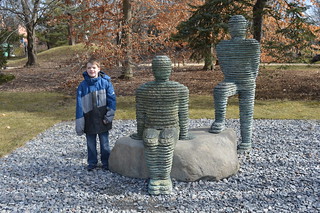 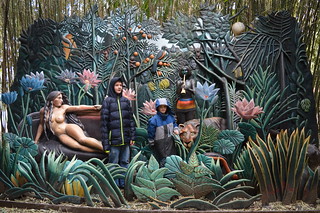 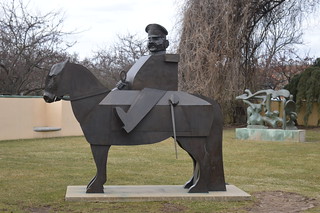