My penultimate lesson for Mixed Media Mythology was a depiction of the Egyptian goddess Maat.  Maat represented justice, truth, balance and morality.  She brought order to the heavens and was often symbolised by a feather.

Lezette Markham was the tutor for this lesson and her demonstration was of a much more symbolic, representational art work.  However, since I have produced figures in all of my work in this series, I decided I wanted to actually have a crack at painting Maat herself while incorporating ideas from Markham’s tutorial.

And that was where I went wrong.

I often feel like I have to take two steps backwards in order to make one step of forward progress with my art.  This piece was one such step backwards.  The profile went badly wrong, her head becoming smooshed in its proportions.  It reminded me of the way in which I went wrong with the profile of Zebra Woman in my Altered Book of Monsters.  Note to self: must practice profiles more often.  I do like the puddly, mixing, liquidy background – one of the elements I took from the tutorial – but otherwise this piece is consigned to my “I learn from my mistakes” pile. 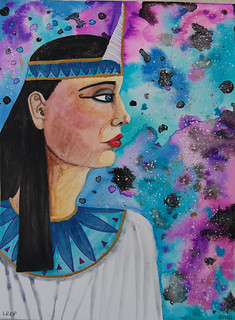