This week there were two Life Book lessons.  I only had time available to tackle one of them so I opted to respond to the lesson taken by Tamara Laporte which involved creating a mixed media portrait of Frida Kahlo.  I am absolutely not a portraitist.  I cannot capture people’s likenesses accurately at all.  The idea of even attempting to portray someone as immediately recognisable as Frida Kahlo was pretty intimidating but that was precisely why I decided to dive in and give it a try: growth through challenge.

Frida Kahlo seems to be pretty zeitgeisty at the moment.  I am seeing lots of homages and merchandise here and there.  I confess I am not a massive fan of Kahlo’s art.  I appreciate it and recognise its worth but it just doesn’t speak to me in the same way that the work of other artists does.  I actually find her more inspirational as a person than I do as an artist.  As such, I didn’t have an immediate idea of how to portray her.  I flicked through some photographs of her and scribbled down some ideas and sketches – the hair style, the daring clothing that emphasised her female sexuality, the use of bold colours.  All of those found their way into my finished piece.  Laporte had incorporated a parrot into her portrait of Kahlo and I took that idea and turned it into a parrot wing.  I had also thought I would add some big jungle leaf shapes into the background, a feature I noted in several of Kahlo’s self-portrait, but in the end I decided that it would all get a bit too busy and let it be. 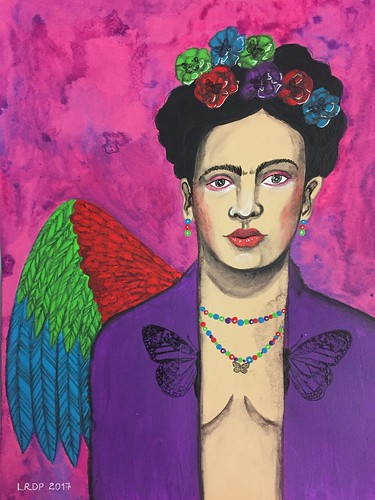 I am not sure how I feel about this piece yet.  I think I need to give it some time before I make a judgement about its successes and flaws.  My husband, who has a minimal interest in the history of art, immediately recognised this as being a portrait of Frida Kahlo, however, so at least I must have somewhat met the challenge of painting a passable likeness.