When it comes to subjects for my art, I am always drawn to faces and figures or monsters or anthropomorphised animals.  What I really don’t tend to touch upon is botanicals, still life, or landscapes.  I decided, therefore, to challenge myself to produce a landscape in the orange section of my Rainbow Art Journal.  Having grown up in Fife, I thought of the orange pantiles that adorn the roofs in villages like Culross – a result of the tiles initially being imported as ballast.  I grew up in the post-war new town of Glenrothes but always enjoyed visiting the fishing villages of the East Neuk so I decided to illustrate a harbour village in my art journal.  There is zero verisimilitude in my illustration and I didn’t use any photo references so my buildings are all a fusion of memory and imagination.  Landscape is definitely not my thing but I really enjoyed creating this page.  I don’t even care that the scale is bonkers, including monstrous seagulls.  Maybe I will force myself to do landscapes more frequently. 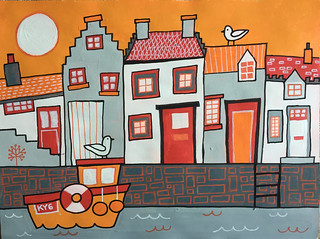 Fife*  is a peninsula, bounded as it is by the Firth of Tay to the north and Firth of Forth to the South.  Its coastline, therefore, has always been important to its culture and economy, from the docks at Rosyth and around the East Neuk.  I wanted to take the boys to see a typical East Neuk fishing village and plumped for Pittenween, situated between St Monans and Anstruther, since it still has a working fishing harbour.  I went with my four boys, my mother and two of my nephews.

We parked up on the West Braes and, after the six kids had all run off some energy on the playground equipment there, we wandered down a coastal path to the shore line.  That vantage point gave us the perfect view over the village.  I was able to point out to the boys the way in which the village was all clustered around the harbour and shoreline with other streets – narrow wynds – running up the hill from the coast.  They were also able to see the traditional architecture: white stone houses with red tile roofs.  The red pantiles are a legacy from the its history of trade with ships from the Low Countries.  I remember being told that the pantiles would have been brought as ballast in the hulls of those ships and that the locals then put them to good use in their buildings.  The buildings certainly makes the town very distinctive and the only Fife town I can think of that is more quaintly historic is Culross**. 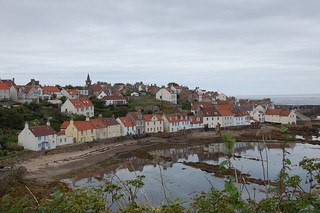 It mattered not one jot to the kids that it was a chilly, overcast day.  There was a beach and they were going to play on it.  While my 12 year old – having the advantage of longer legs – rolled up his jeans and waded out into the water, the other boys got busy studying shells and soon I got them collecting sea glass.  I was obsessed with collecting sea glass from the Fife coast when I was wee.  Clear was common followed by green and brown but it was like finding treasure to find a piece that was either blue or red.  Soon enough, all the boys were similarly obsessed with a mission to find interesting pieces of sea glass or sea pottery and they too would squeal with delight when they found a tiny piece that was a shade of blue or a sliver of red. 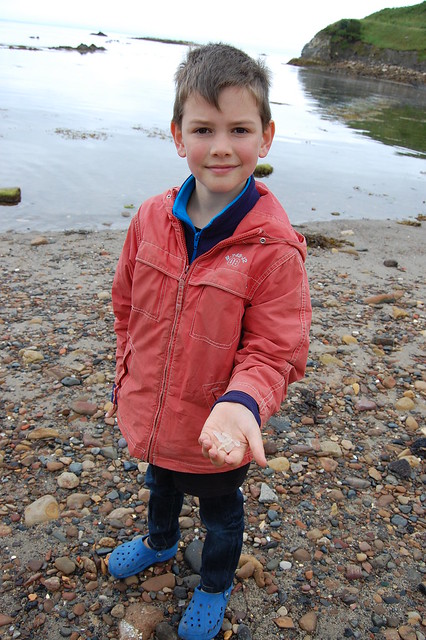 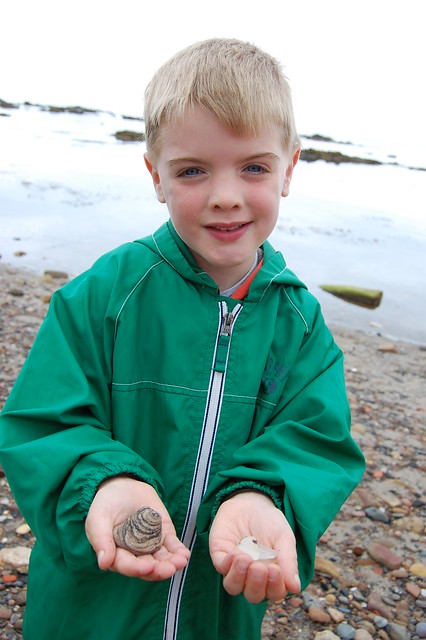 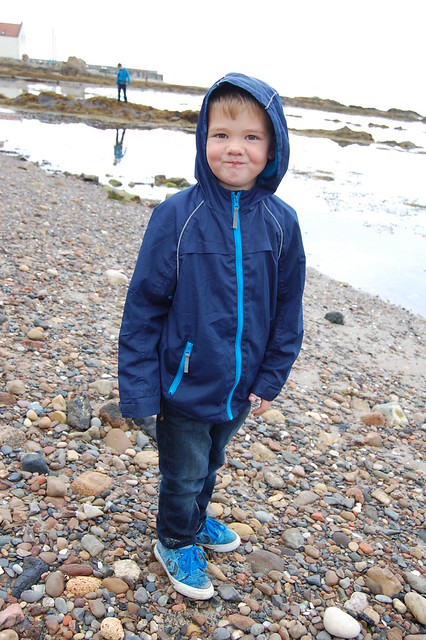 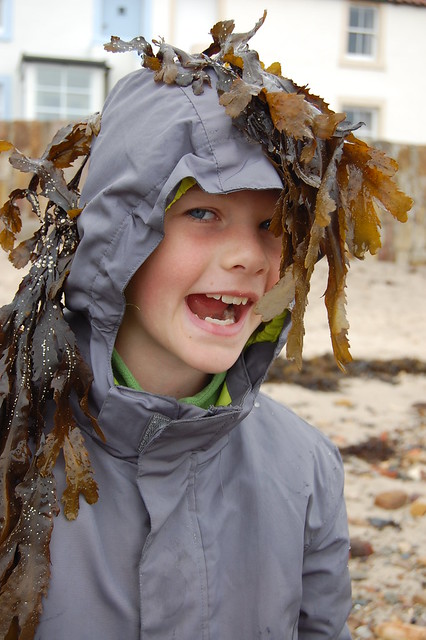 We then walked through the village.  We stopped opposite the harbour in order for the boys to have an ice cream cone each.  That village sweet shop did well out of us as I gave the six boys a pound each with which to buy treats on the way back too – doubling as an exercise in making budgeting decisions and addition.  Replenished by the ice cream, we then climbed up a steep wynd in order to reach the High Street.  There I popped into the Cocoa Tree coffee shop to borrow the key to St Fillan’s Cave.  In all my years of living in Fife and returning to visit my family, I had never once been to St Fillan’s Cave so it was a new experience for all of us. 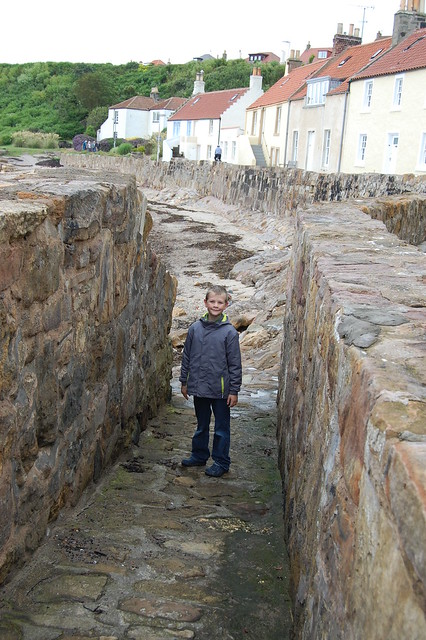 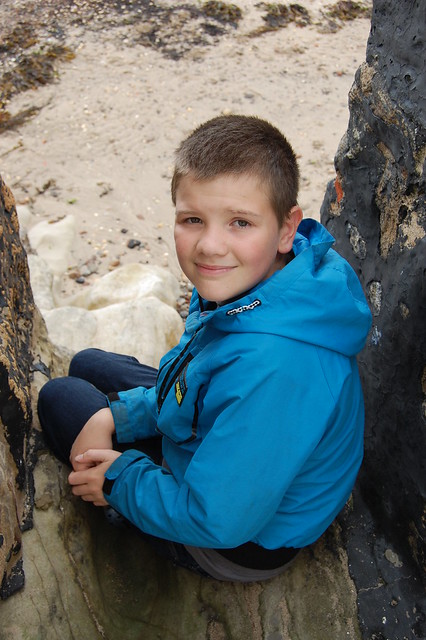 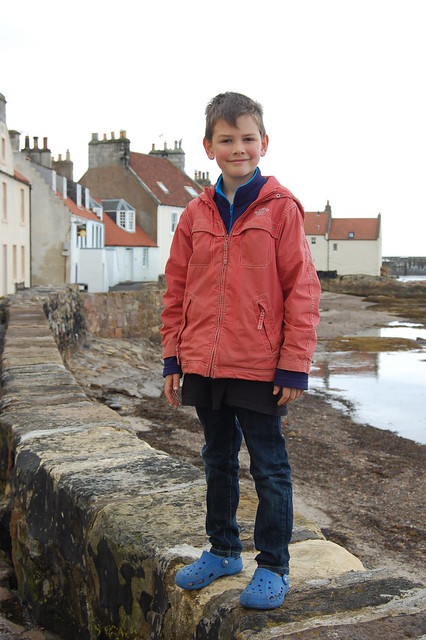 Just a brief wander down Cove Wynd brought us to the cave.  The place name Pittenweem, by combining Pictish and Gaelic, actual means “place of the caves”, probably referring to St Fillan’s Cave rather than any other caves in the vicinity.  Local schoolchildren had decorated the exterior with a mosaic using materials from the beach and a local metalworker had made a fantastic gate.  Unlocking the gate, we entered, flicked on the lights and walked into the cavern.  As its name suggests, the cave is associated with St Fillan.  The legend goes that Fillan was a 7th Century missionary who came to Fife to convert the Picts to Christianity.  He lived in the cave and could read and write in the dark because his left arm was luminous.  The cave was probably used by spiritual hermits and was a place where pilgrims could stop in and visit en route to St Andrews.  It was also used as a store for smuggling and for legitimate fishing equipment.  Apparently it was then forgotten about for many years until a horse, ploughing the land above, fell through a hole.  The cave was then cleared and turned into a chapel again, used for occasional services.  The boys loved exploring all of the nooks and crannies of the cave and I let them experience the pitch dark by gathering them safely in the centre and then switching off the lights.  Without the benefit of luminous arms, they soon wanted the lights back on. 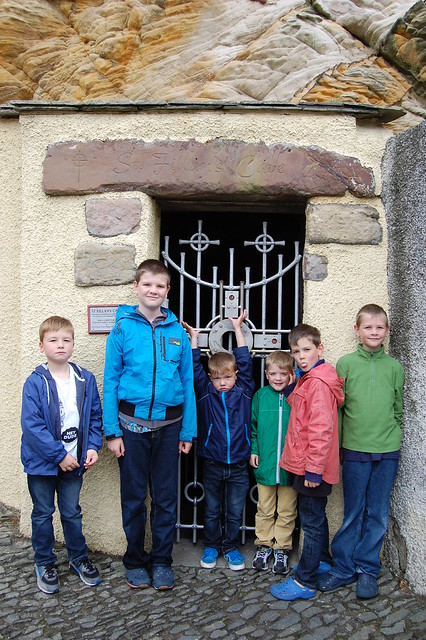 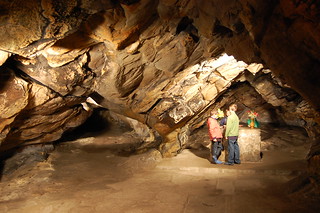 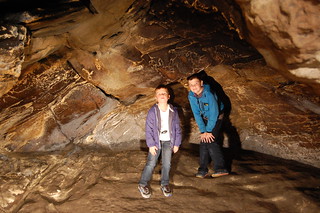 We then wandered down to the harbour to watch the boats and just enjoy the peace and quiet.  We then wended our way back towards the beach, where the tide had come back in to the consternation of the kids, and back up to the Brae for the kids to have another run around as a conclusion to our trip. 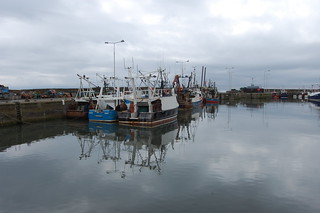 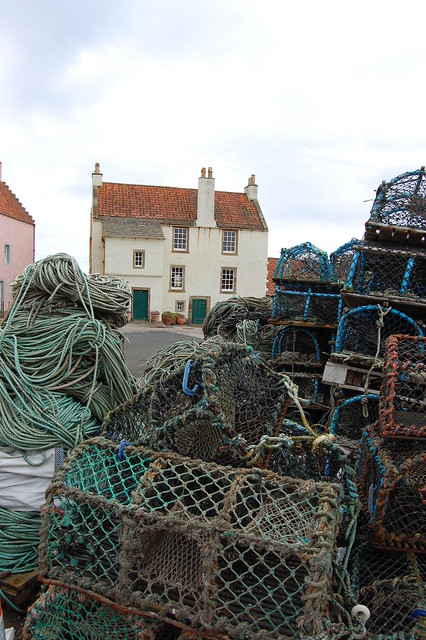 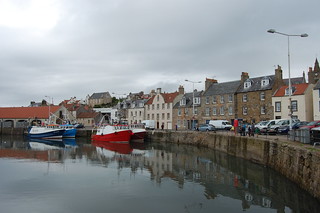 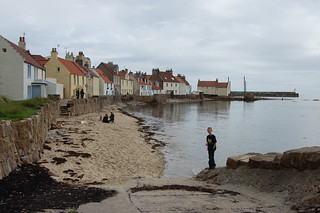 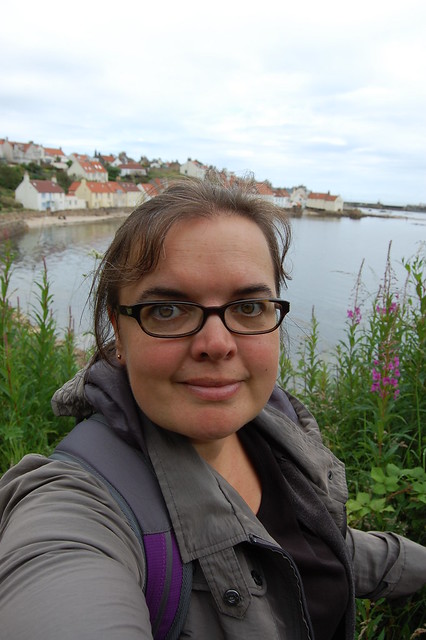 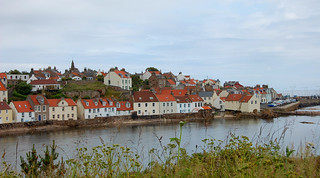 *Or the Kingdom of Fife as it is still known in reference to it being a Pictish realm, hence the title of this blog since I am a Fifer.

** We unfortunately did not have time to visit Culross on this particular trip to Britain but I heartily recommend visiting.