I really struggled with this week’s Life Book lesson.  I was rushed and flustered and improvising as per usual but it was more than that.  I just couldn’t quite pull all the elements together to make the concept I had in my head materialise on the paper.

The theme was about embracing every part of yourself, whether positive or negative, and that was visually translated into a piece about shadow and light incorporating a kneeling figure.  In my head, I had the idea of golden fireflies emerging from the hands of the figure, their metallic glow contrasting with the dark, grungy background.  What emerged, however, was a bit of a mess to say the least.  Perhaps I will find the time at some stage to attempt a “do over” on my idea and execute it more successfully. 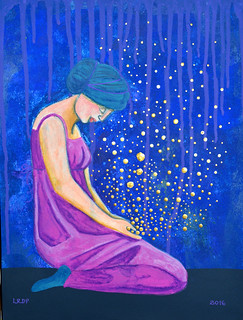 As a follow up to my recent blog post about fireflies, here are some photos of my kids out in the garden catching fireflies.  They loved it.  Even though they are now seeing them every single night, they are still as excited by it as they were the first time they saw them.  They want to go out into the garden every single night with a jar and collect enough to make it glow like a lantern.  They think it is completely magical.  Every.  Single.  Time.  What I am also enjoying are the bats flying overhead, swooping around and probably eating the lightning bugs but, you know, circle of life and all that.  We used to get bats in our garden in Scotland too so it is lovely to see them here in Pennsylvania.  Even though these ones might have rabies.  Less welcome are the mosquitoes that bite me constantly.  I am allergic to bug bites so I swell up into hot, throbbing, red patches of grossness every time one nibbles on me.  Definitely not magical.  However, this is all about the enchanting wonder of fireflies so here are some pictures of my sons in their jammies collecting the lightning bugs.

PS  A friend from back home in Scotland informs me that she has sometimes seen fireflies just a few miles from where we lived.  I lived there for over a decade and never once saw them.  Glowing little blighters.

The other evening, while watching TV with Mr Pict, my eye kept getting drawn to flashing lights in the garden.  However, every time I asked Mr Pict to look, he could never see anything.  I knew my eyes were not deceiving me, that I was not experiencing either an optical malfunction or a hallucination, so the next evening, I kept one eye trained on the windows.  Not necessarily the most comfortable way to watch telly.  As soon as dusk settled into darkness, the flashing started again.  The kids had only just gone to bed so I got everyone to gather in the playroom to look.  Sure enough, this time everyone else could see what I was seeing: flickering lights gliding upwards from the grass into the sky.  And the lights got stronger and more numerous as it grew ever darker.

Despite the fact we do have fireflies in Scotland, they are rare so I had only seen fireflies once before – and that was in America too –  but my kids had never seen them.  It’s not often that one gets to use the word bioluminescence in general conversation but I gave up on trying to teach the kids the science behind it mid-sentence anyway so that they could just watch and enjoy the spectacle.  A teeny weeny wee bit of subsequent research, however, has revealed to me that Pennsylvania has it’s very own firefly – Photuris Pennsylvanicus if we want to be all Sunday name about it – and that the male beetles can fly but their lady friends, who they are trying to impress into getting jiggy with them – remain on the ground.  That explained why I had been seeing lights flickering at both levels: it wasn’t that they were moving upwards into the sky but that some were remaining on the grass while others flew around to be show-offs.  Some other things I learned about these fireflies is that they are quite fond of munching slugs and have, as such, evolved the ability to track slug slime trails.  It makes me think of aeroplanes looking for the airstrip.  Also, the larva bites its prey and injects it with saliva that turns the prey’s insides into soup.  Pretty cool, eh?

Magical.  That was the best thing about watching the fireflies.  They were simply magical, like a special effect from nature.  We were all completely enchanted.