Last week’s Art Journal Adventure prompt was “wing it”.  Finding time for art this week was a major challenge.  We are all adjusting to a new routine.  My four kids are in three different schools; the oldest has to catch a bus half an hour earlier than last year, which means pulling our morning routine half an hour earlier.    It’s a chaotic transition period.  I feel like I am either chasing my tail constantly or trying to catch myself up throughout the whole day.  Exhaustion is the dominant theme of my life right now.  We will keep tweaking things until we get the schedule running like a well oiled machine but, until then, my free time for art is severely curtailed.

Therefore, “winging it” is exactly what I did with this journal page.  I decided to not put much thought or planning into it, to just use my art journal as a decompression tool and enjoy the process rather than focusing on the outcome.  Winging it made me think of bird wings and feathers so that gave me my subject.  To ensure that I didn’t get too fussy or tight with my drawing, I decided to “wing it” again: I dipped a chubby paint brush in black acrylic and drew the wing with my non-dominant hand.  In retrospect, using my left hand maybe wasn’t the best idea.  After filling in the negative space with black acrylic and letting the whole thing dry, it was time to add colour.  I did so by just splashing some pigment rich watercolour paints into the feather shapes and letting it run all over the place.

It is just as well that I was not focused on the outcome because the outcome is pretty rubbish really.  My ten year old tactfully told me it was “not the best”.  I like the idea of a wing made of rainbow feathers and might return to that at some stage.  This page, however, is what it is.  I “winged it” for sure. 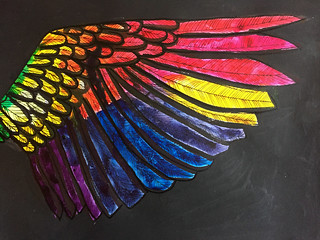 Some weeks my creative mojo is sorely lacking.  There can be many contributing factors, of course, but there are short periods of time where whatever I put my hand to is mediocre at best.  Last week was one such week.  I do remember the many times I experience success with my art and I also value the calming, restorative, recharging effect of having worked on art even when the outcome isn’t what I would hope for.  Nevertheless, last week was one of those weeks where nothing I did in terms of art was pulling together.  The pieces never emerged from the ugly phase.  They just got uglier.

The first piece was produced in response to a Life Book lesson taken by Jodi Ohl.  It was all about adding typography to a colourful, layered background.  Layering has long been one of my art nemeses so I knew it was going to be a challenge.  Sometimes I rise to the challenge but not this time.  The palette of bright colours I added worked with each other for maybe two layers and then they started to fight with each other and then they somehow lost their vibrancy and looked not so much like mud but like sludge.  I tried to knock back areas by negative painting in thinned gesso and that only served to make everything look more dull and grey.  In a last ditch effort, I added some Neocolor II inside the feather shapes, trying to obliterate the underlying layers.  That pop of colour rescued the piece from going into the trash but I still found the whole piece to be unsatisfactory.  Having used gritty gesso, I decided not to waste the nib of any pens on this piece and instead stamped out lines from the famous Emily Dickinson poem around the feather shapes.  I was glad to see the back of this piece and move on to something else. 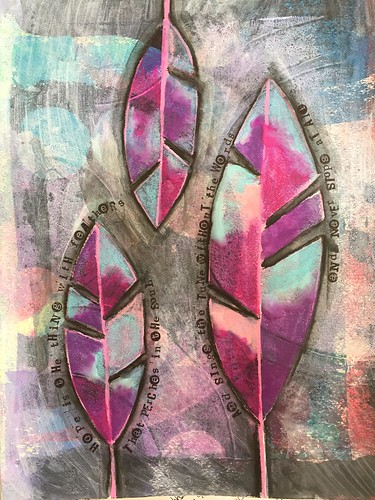 Alas, the thing I moved onto was a page in my art journal, a response to the Art Journal Adventure prompt for the week.  The idea was to use curvy and round elements.  I had not used my gelli plate for a while and the youngest kids were up for having a play with it too so I decided that that would be my tool and technique for this week’s page.  I have not experimented much with printing directly into my art journal from the gelli plate so that was my personal challenge.  I chose to push the journal down onto the plate.  Perhaps things would have worked out better had I flopped the plate onto the paper instead but I doubt it.  I cut out some circles and curvy arch shapes from shipping envelopes to use as masks in different layers.  The first couple of layers looked pretty good but there was not enough interest for me to quit while I was ahead.  I pushed on with a further layer and obliterated what had been a nice little area on the page.  That was annoying but I pushed on hoping that subsequent layers would lead to some other interesting shapes and textures and contrasts emerging.  Unfortunately, that was not what happened.  I think I need more regular practice with gelli printing in order to develop some skill with it, some idea of how to achieve different looks rather than my haphazard, slapdash way of doing things.  I got to the point where I was sick of the sight of the page so decided that was a good reason to stop.  I finished it all off by gluing down some of the circle masks I had been using. 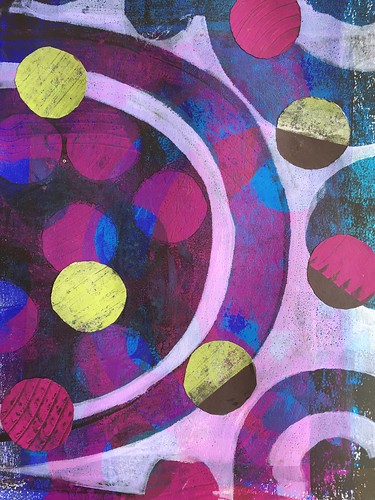 It was not a good week for art, therefore, but I am choosing to focus on the positive of the flaws and failings being learning opportunities.  I have, as stated above, learned that I need to actually plan out what I am doing with the gelli plate rather than just shoving elements together and hoping for the best.  The solution is more practice.  I have a small gelli plate so perhaps I will keep that to hand and have a play with it more frequently to see if I can develop some sort of process that works for me.  I have also learned that layering remains something that I struggle with and I should probably just conclude that it is not my thing and stick to techniques that do work for me.  Investing time and energy into approaches that result in pleasing outcomes is ultimately going to be more fulfilling than trying to learn a technique that eludes me.  It is OK for me to hone the skills I possess instead of chasing after the ones I don’t.   My mojo will return.

There were two lessons in this week’s Life Book course and I managed to find time to complete one of them.  The object of the lesson was to create a piece inspired by a hummingbird incorporating collage as one of the media being utilised.  I have been using collage regularly as a background or otherwise visually minimal element but it has been a while since I have used collage papers as a prominent feature so that was fun.  I used origami papers for the wing and tail feathers and then drew with activated Inktense pencils over the top of the collage in order to make it cohere with the body, which I painted with watercolour.  It’s a simple piece in technique and outcome but it provided just the therapeutic decompression I needed in yet another over-scheduled week. 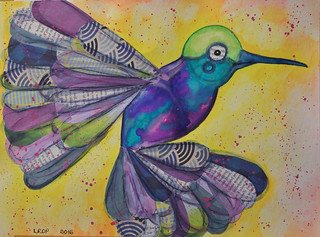 There were two lessons on Life Book this week, both very different but both involving feathers.  One was a success for me; the other less so.

The main lesson was taken by Rachael Rice.  The object was to create a dimensional piece representing a dream catcher but – for a variety of diverse reasons, including not having all of the materials required – I chose to do something else.  I seem to be making a habit of going my own way with LB lessons.  I need to learn to steer a path between creating something that speaks to me, inspires me, meshes better with my style, and getting the most out of the lessons by following the instructions.  Sometimes I find that path; sometimes I don’t.  It was another valuable lesson in painting over collage.  It ended up wrinkling a little but I actually quite liked that.  I also enjoyed using the metallic paints, gold and bronze.  I am not sure it shows up in the photo but they created a nice warm shimmer.  My feathers look a bit more like leaves but I liked the technique involved in constructing them.  Having no fabric to use in my collage, I ended up using white acrylic paint to produce what are fast becoming my signature dots.  What I produced is not a disaster but it is just a bit meh.  I will definitely use the techniques I learned in future projects, however. 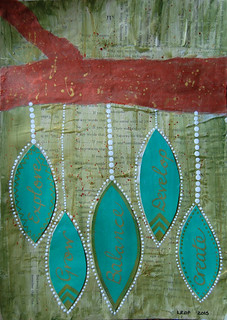 In comparison, the bonus lesson completely inspired me.  It was an Affirmation Feather tutorial taken by Tamara Laporte, the course organiser, and involved me using two new media I have never used before: Dylusions spray inks and Posca paint pens.  I loved using both of them and will definitely use both again.  My colour scheme for the piece was dictated by the few colours of ink sprays and aquarelle pens that I possess but I rather like the freshness of the lime and teal.  The colours make me think of winter melting into spring.  I am definitely looking forward to spring.  I messed up a little when adding gesso because it smudged the ink but I managed to problem-solve it and recover.  I love the whispy feather, really like how this piece ended up and really enjoyed the process of creating it.  It definitely makes a difference to me when I engage with the lesson, inspires me more and gets me producing better results. 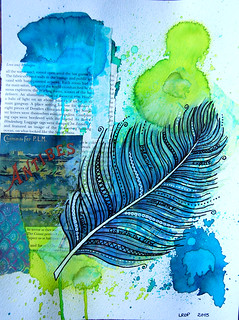 Tamara’s feather lesson was definitely my favourite so far.