I like Thanksgiving as a holiday and I am glad I now get to legitimately celebrate it.  As it is not related to a faith group or specific culture, it is inclusive (albeit that it is technically linked to a commemoration of colonising and persecuting an indigenous population) and everyone is off school and work at the same time.  There is no frenzy of gift buying and wrapping, no decking of the halls (at least not for us) and so the focus is just on togetherness and feasting.

Being relatively new to Thanksgiving, I am only just gradually trying and testing different traditions and seeing which fit and which do not.  This year, literally just two days before Thanksgiving, we had a painter in decorating our living rooms.  The house was topsy-turvy, with boxes of art work, ornaments, books and possessions, shelves and cushions stowed absolutely everywhere else in the house.  It was not conducive to organising anything and – in truth – I forgot to even meal plan until the day before.  And that was the day when my oldest son came down with a sickness bug so we were housebound.  Therefore, partly out of pragmatism and necessity and partly because I needed to use my time in other areas  – such as putting the house back together – I took some lazy options and decided to try some American traditional foods.

I love green bean casserole.  It’s delicious.  That is partly because I load it with even more strong cheese and wholegrain mustard than the recipe instructs but it is just entirely scrummy.  That’s a tradition I am totally on board with.  Brining the turkey ensured that it was succulent and juicy despite its massive bulk.  I am a roast potato fan but at least one of my kids claims he only likes potato if it is mashed so we decided to follow the American tradition of having mash.  To make it extra creamy, however, I added sour cream and cream cheese.  It was amazingly creamy and rich but my kids hated it.  No actually they loathed it.  Fail.  Back to the drawing board with the mash then.  We also used corn muffin mix rather than making them from scratch just because of time.  They were OK but not amazing.  The biggest fail of the day though was the stuffing.  In Britain, stuffing is normally based around sausage meat.  My intention, however, had been to make my mother-in-law’s recipe for rice and mushroom stuffing.  Again, however, my timings being scuppered we opted to try out traditional American stuffing which is based around seasoned bread.  It was horrid.  Nobody ate more than a morsel of it because it was so entirely bland both in flavour and texture.  Not doing that again.  None of our desserts were homemade this year either.  However, my husband and kids assure me that the pumpkin pie, pecan pie and fruit tart were delicious.  So our Thanksgiving feasting traditions will continue to evolve until we get a mixture of things we all enjoy – or which the majority of us enjoy at least.  And next year we won’t schedule lots of upheaval just before the holidays either. 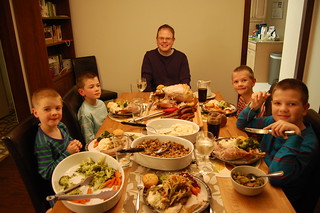 The following evening, we took a trip out to Shady Brook Farm to see their Holiday Light Show.  This was another attempt at forging a tradition since we had also gone there last year.  The car drives through the displays of light which makes for some lazy spectating but keeps everyone contained and cosy.  My kids each had a blanket in the car with them.  The first section was themed around the song ‘Twelve Days of Christmas’ so we all sang the song, loudly, as we drove past each section of lights, often in a tuneless muddle but it was fun nevertheless.  We also liked the sea themed section, the landmarks of the world and fairy tale sections.  The displays all seemed to be the same designs as we had seen last year but that was OK as everyone enjoyed the twinkly lights – especially the tunnels of lights we drove through. 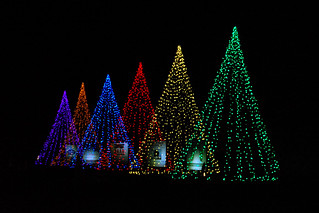 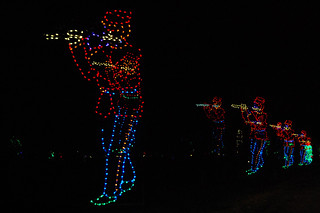 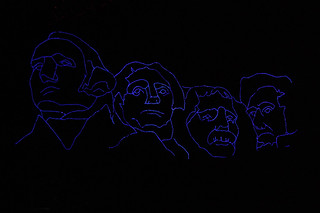 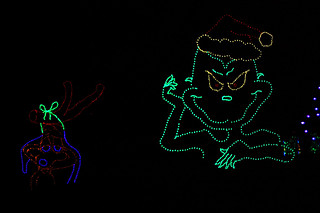 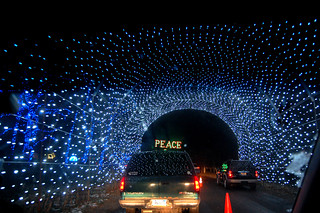 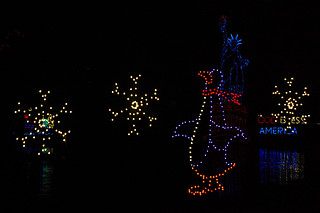 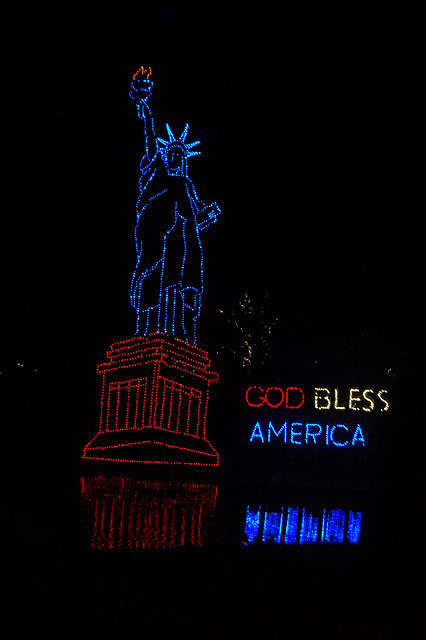 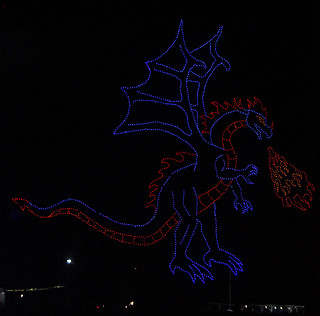 After the driving section, we parked up and wandered around the produce market section.  While festive music played and synchronised lights twinkled and flashed, people were toasting s’mores around fire pits and aromas of salty kettle popcorn, melting chocolate and fried

dough filled the air, wafting at us temptingly from the surrounding stalls.  We capitulated to temptation and bought a toasty hot funnel cake which the boys devoured in a matter of seconds, like hyenas ripping through a downed wildebeest.  I should have made funnel cake and s’mores for Thanksgiving dinner. 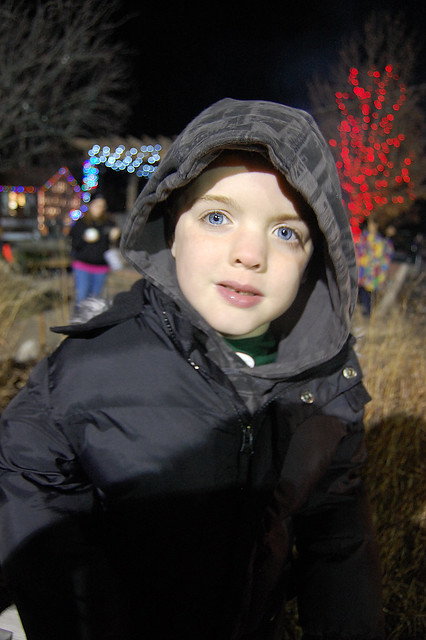 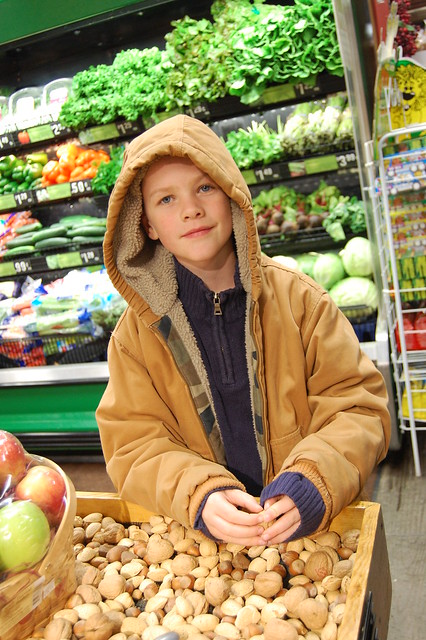 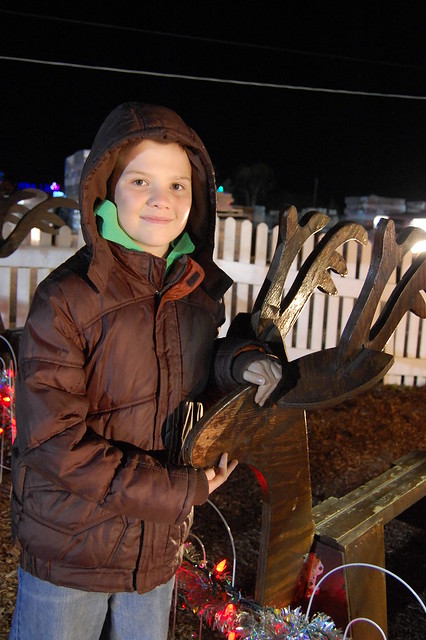 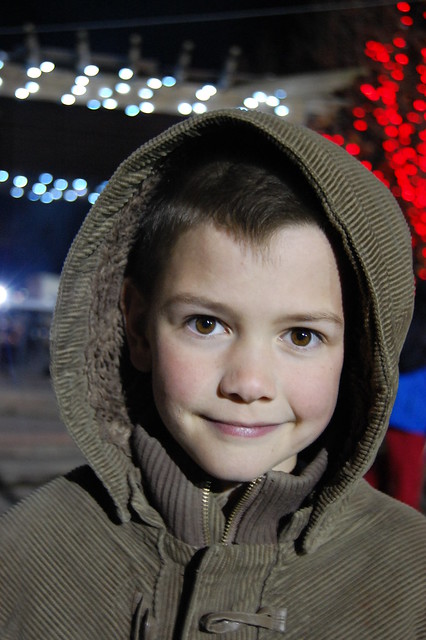 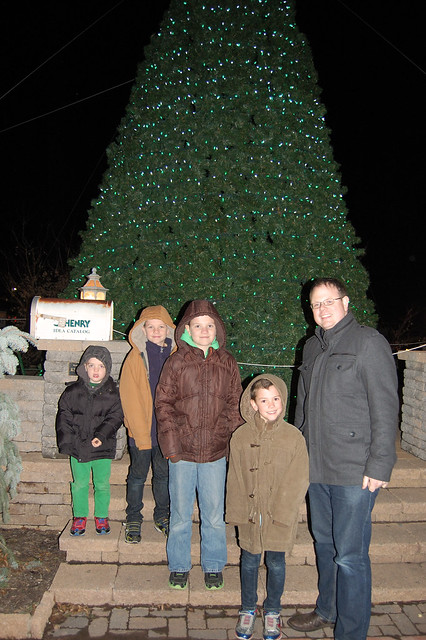