In the Summer of 2013, when we knew for sure that we were going to be emigrating from Scotland to the US, I had to go through the process of selling, donating and ditching loads of our possessions and packing up what we were keeping in order to prepare it to be shipped across the Atlantic.  One of the more tedious jobs I did was to spend an entire day packing up my sons’ very many Lego sets.  I took each set in turn, broke it down into individual bricks and pieces, placed those bricks into ziplock bags, and labelled each bag according to the information on the building instruction manuals.  It was the perfect job for a control freak mother like me but goodness it was laborious and my thumbs were throbbing by the end of the day.  Still, all the effort was worth it as it meant all those Lego sets could be safely transported across the ocean, taking up as little space as possible, and could be easily rebuilt set by set once we were settled in Pennsylvania.

We were packing up our lives in Scotland, breaking things down into fragments, compartmentalising, putting things in order, imposing a system on the chaos.  I assumed there would be a difficult transition period, a settling in phase full of stress and glitches and the odd set back, a need to feel our way through the jumble just like all those loose bricks jumbled in their labelled bags.  But we would be rebuilding a new life on another shore, piecing it all back together again in no time at all.  Lickety split.  Tickety boo.

Not long after our shipping container finally arrived, a visiting child took it upon himself to rummage around in all the plastic storage crates full of toys.  One such crate contained all of the ziploc bags of Lego.  The child opened up every single one of those ziploc bags, about 50 in total, and emptied them all out onto the floor.  My kids were incandescent.  I felt bereft.  And stressed.  And overwhelmed.  A full day’s worth of work, my attempts to impose order on the chaos, to make rebuilding easy and fun, were all completely and utterly undermined.  All my hopes for an easy rebuilding project were dashed.  I looked at that Lego all over the floor, thousands of bricks in a tangle of mess, and I felt deflated.

Settling in and establishing our lives in a new country did not go to plan either.  There were big things I expected to be much more trying but which were pleasingly easier than anticipated; however, there were other things that proved much more difficult to navigate, things we did not anticipate.  We had been focusing so much on the challenges of living in a new country that we overlooked the challenges born of changes to our family dynamic, the schedule and shape of our everyday lives.

That transition period has still not concluded over two years into life in America.  We are really only starting to come to grips with everything immigration has involved now.  I had to be gentle with myself, accept that things were going to be rocky for a while, that we would stumble a bit, and give myself permission to feel frustrated and annoyed and stressed and anxious.  I had to give myself the gift of more time.

Likewise, I left those Lego sets for a while.  My kids played with the few we had already built and the rest of the bricks languished in a huge storage crate waiting for me to feel ready to tackle it.  It was too stressful to contemplate rebuilding from that scale of chaos.  I had to gift myself more time.  A few months ago, I decided to tackle the issue.  I decided that I would organise the bricks differently, there being no possible way to recreate my first approach.  I made up a bag of red bricks, a bag of blue bricks,a bag of barrel shaped pieces, a bags of wheels ….It took me a couple of days but gradually order was imposed on the chaos.  It still takes us a lot longer to rebuild a set since we have to look at each instruction and rake through the bags to find the right piece but at least now we are only looking in the bag of small grey bricks to find the required small brick rather than raking through the entire huge tub, a lego needle in a haystack.  The new approach is working.  We are rebuilding the Lego sets again.  Progress is being made.

I had to change my expectations, develop a new approach to problems, and accept that it is going to be a gradual and slow process.  For Lego.  For immigration.

The next Documented Life Project prompt I tackled was all about photographs and memories.  The accompanying phrase prompt, however, was distinctly sombre: “All that I have to remember you”.  I immediately felt inspired, maybe even compelled, to create an art journal page that functioned as a sort of visual memorial to a dead loved one.  I wanted to resist the impulse as I try to not make my art journal too personal and I certainly aim to avoid such personal subjects.  Then I thought I should challenge myself and take a chance on handling an emotive topic.  Gulp.

Sadly, I had lots of loved ones I could have chosen as the subject of my page.  However, it is that time of year when I begin to brace myself for the anniversary of the birth of our stillborn son and when I really have to consciously wrestle with my grief welling up inside me again.  If I was going to feel exposed creating such a personal art journal page then I thought I might as well go with my impulse to tackle an aspect of my life that makes me feel emotionally vulnerable.  Gulp.

I think the page is self-explanatory and the materials used obvious.  The focal element is provided by the tags.  One of them contains simple stamped words.  The other two have my baby son’s hand- and footprints, each little digit not much bigger than the buttons I attached to the tags. 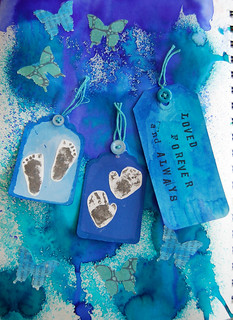 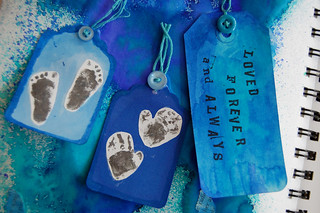 Probably for obvious reasons, I spent longer pulling together this art journal page than I usually do.  I would like to report that it was a cathartic, healing experience but honestly I am not sure it helped at all.  I think I am glad that I attempted a more emotionally involved page but I don’t think I shall repeat the exercise.