Normally I would not bother even mentioning the food we ate on our vacation let alone devoting a brief blog post to it.  For us, when travelling, food is really merely fuel.  We jam pack so much into every day that there is no spare time to make an event out of a meal.  We also try to be thrifty by eating simply and by eating “at home” when we have access to kitchen facilities.  However, sometimes a dining experience is worth mentioning and we had one such experience in LA.

Guided by Mr Pict’s cousin, after spending most of the day at the La Brea Tar Pits and with all five of the kids getting “hangry”, we headed to Saddle Ranch Chop House.  The best way I can think to describe it is a themed gastro pub and its chosen theme is the Wild West.  As such, there were verandas on the building’s exterior filled with models of saloon dwelling ladies, a model of a bull to greet us at the threshold, and a mechanical bucking bull in the dining area.  It turned out to be an ideal choice of dining venue because it was not only spacious enough to easily and immediately accommodate our party of nine but it was also relaxed and informal enough to deal with the fact that five of those nine were kids. 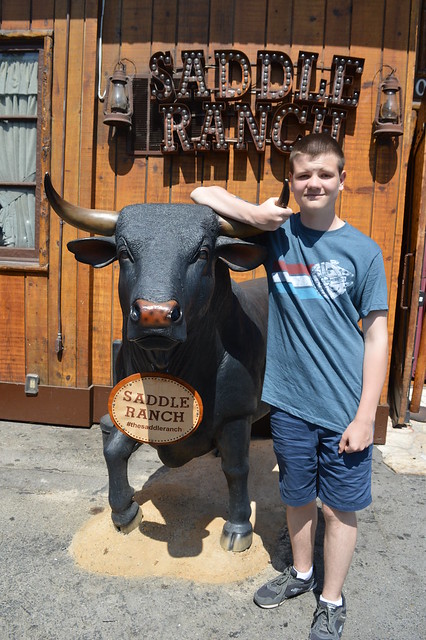 L and I treated ourselves to cocktails and mine turned out to be served in something that could have been described as a vase.  It was not remotely the scale I was expecting but I was not complaining.  It was delicious.  I also ordered a salad that turned out to be so vast that I could not finish it despite it being my only meal of the day.  Everyone else had colossal portions too and we ended up taking home several boxes of food to serve as meals for another day.  The food was all perfectly cooked, very tasty, and served in a timely fashion and with a smile. 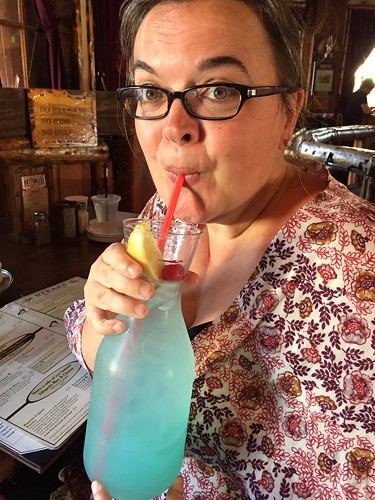 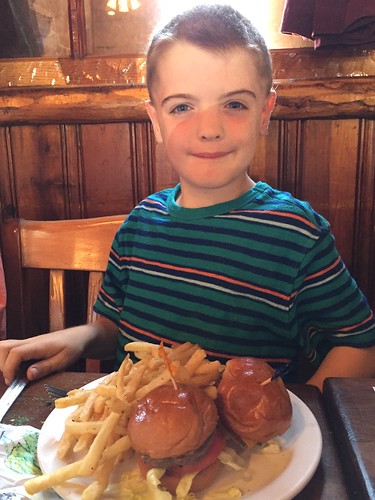 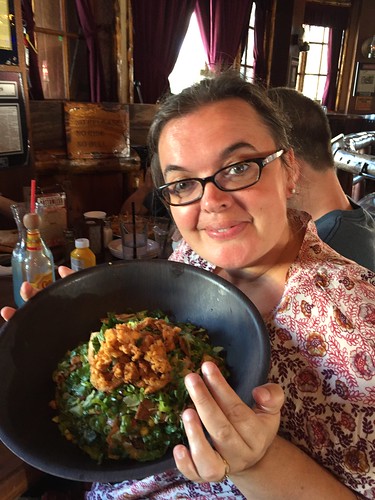 Main courses complete (to the degree that we could eat them), the kids were surprised by an order of candy floss (cotton candy) to share.  This was not an ordinary candy floss, however.  Oh no.  This was a candy floss that stood three feet tall.  It was cherry flavoured and the kids thought it was the best candy floss ever.  But that was not all.  The waiters then surprised us by giving the kids not one but two complimentary platters of ingredients for making s’mores.  The kids’ eyes were on stalks and they were giddy with excitement. 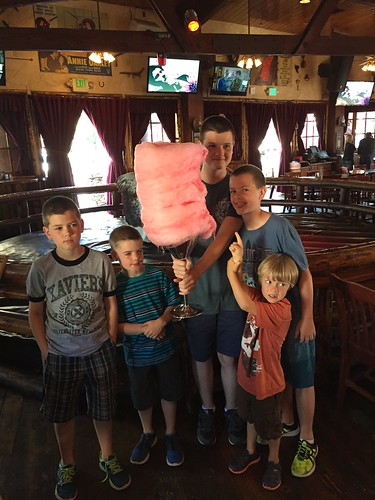 We relocated to the patio area of the restaurant where there was a fire burning in a pit.  While the grown ups chilled in the sun, the kids got busy creating sweet and sticky concoctions on sticks.  They didn’t just stick to making traditional s’mores and instead invented things like marshmallow sushi and candy floss mustaches.  They had an absolute whale of a time and ended up in a gooey, sticky mess at the end.  They were also very fizzy so we decided to harness that sugar-fueled energy and move on to the next activity of the day. 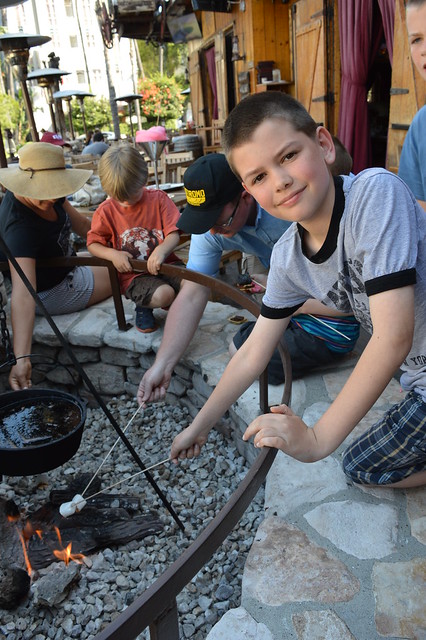 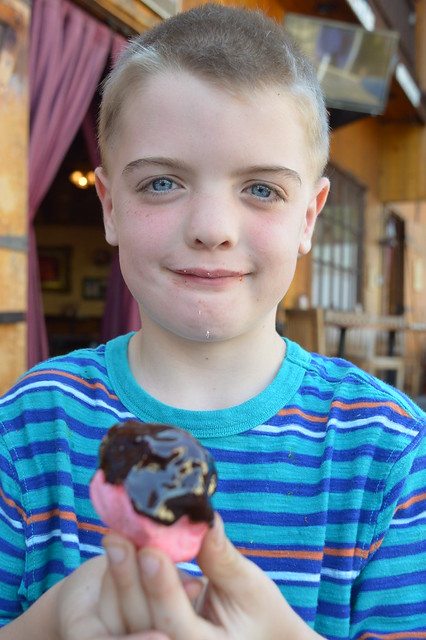 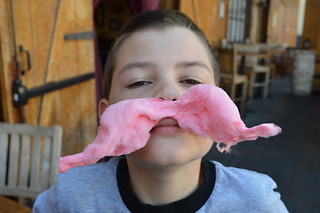 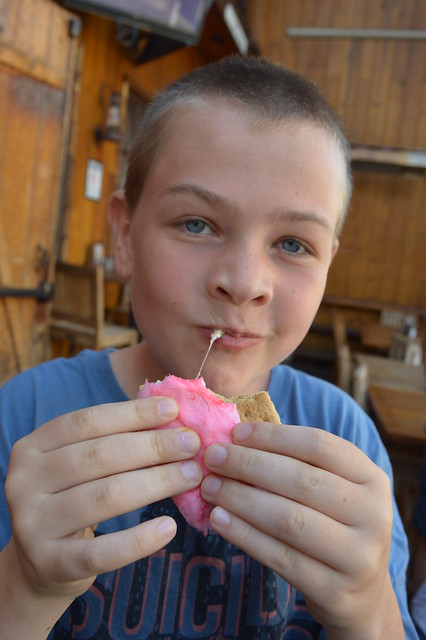 My kids have just tried Twinkies for the first time.

Had it been up to me they would not have been trying them at all but Mr Pict is a sucker for the kids’ “take me home from the pound’ eyes so when the 4 year old wanted to put a box of Twinkies in the shopping trolley (because minions were promoting them) he succumbed.  The box then sat on the shelf for over a month, which isn’t a problem because I’m pretty sure Twinkies are one of the things that will survive nuclear annihilation.

I had my first Twinkie in the summer of 1995.  I had never been to America before so my husband and his friends were eager to introduce me to all sorts of new things.  One friend decided to pick out a whole cornucopia of “treats” for me to try at a 7/11.  We then went to a park where, as dusk turned to dark, I also watched my first fireflies sparkle among the trees.  That was magical.  What came next was not.  The Twinkie was proffered, I took a large bite and almost gagged.

I’m Scottish so I have a sweet tooth.  Loving sugary things is part of my cultural inheritance.  But the Twinkie was artificially sweet and cloyingly so.  I don’t think I have tasted anything as dreadfully chemical as that before of since (though my first-and-last sip of Mountain Dew comes close).  It was just vile.  And it squeezed and squelched down my gullet like shaving foam.  My gag reflex was activated.  Biting into the sponge was also not a pleasing sensation either as it felt like I was sinking my teeth into rubber foam or carpet. Or both.  If sponge cakes grew on trees, the Twinkie tree would only be found growing in Chernobyl.  Grotesque.

Yet here I am now allowing my kids to try a Twinkie each. The edible sins of the mother are visited on her sons.

I so wanted them to agree with me that they were vile.  Instead they used adjectives like “creamy” and didn’t mean “as in shaving”.  All four said they were “awesome”.  I wasn’t mishearing the word awful.  They actually meant awesome.  And not in the way that the power of the atomic bomb is awesome.  To them awesome is a superlative positive.

So to mitigate against my failure as a mother – the fact that my kids have, at best, questionable palates – I am going to ensure that no Twinkies every darken my doorstep again.  Not even ones with cute characters on the packaging.

When I encounter people and they hear my accent, one of the most frequent questions they ask as a complete stranger to me is what foods I miss from Scotland.  The fact is, however, that most of the foods I might miss I can actually obtain here in America.  The difference is that here I would have to sell at least one of my kidneys and perhaps another organ or two on the black market in order to fund having those foods stocked permanently in my larder cupboard.

I have stated before on this blog that I am a cheeseaholic and that extra mature cheddar and European cheese varieties are something I, therefore, miss.  I have found sources of at least the latter camp of cheeses but the price for just a small chunk means they never make it into my trolley.  Another thing I had been missing, however, was a really good curry.  Brits generally are pretty dedicated curry munchers and I am no exception.  I adore Indian food.  I enjoy making curry and the rest of the Pict family enjoys eating my curries.  The time had come to make a curry in Pennsylvania.  However, when I went to the supermarket I could not find all of the spices I needed.  Desperate for a good curry, however, and knowing that I will need to continue eating curry, I decided to buy certain spices – ones I use frequently – in bulk online.  So last week my parcel of spices turned up and I could embark on making curry.

I did though return to the supermarket to buy some things to accompany the curry which is when I discovered that they don’t stock naan breads or poppadoms.  I am not a gifted baker.  I am a reasonably good cook but I don’t have the precision required to be a good baker.  Naan breads, especially the ones that at least seem like they have been cooked in a searing hot tandoor, are very much beyond my capabilities.  In future, therefore, I might make some chapatis and get the kids to accept those as a naan substitute.

But then I saw the price of mango chutney and I was staggered.  A tiny jar cost the same amount as I would have paid for at least three jars back in Scotland.  Leprechauns should be giving away chutney at the end of the rainbow.  I love chutney but confess to being a mango chutney addict in particular.  I actually cannot countenance living without it.  So, until I find a dependable and affordable supply of mango chutney, it looks as if I might have to make my own.

On Saturday, I took three of my boys to have breakfast with Santa – the 8 year old opted out.  This was a first experience for all of us.  Perhaps they do this in Britain too but I was not aware of it until we moved here.

The event was being held just around the corner from us so we toddled off in the chill wind but were soon indoors in the cosy eating mess which was filled with the aromas of scrummy breakfast treats.  When we paid our money, we were each given a chit of paper that we had to fill out stating which particular elements of cooked breakfast we wanted.  We then handed those in and, while it was all being cooked, we were able to spend some time with Santa.

My kids have not had much in the way of Santa encounters.  In the town we moved from, a Santa would travel around on a motorised sleigh just ahead of Christmas, pulling into each street and handing out chocolates to children.  He usually pulled up our shared driveway and my boys would scamper out in their jammies (because somehow I always forgot Santa was expected), exchange a quick few words through chattering teeth and then scurry back indoors again.  However, they have never visited a store-based Santa or a grotto.  My children are aware, incidentally, that these Santas are all just the real Santa’s helpers because obviously Santa himself is way too busy at this time of year to be patronising various events across the globe.  For that reason, therefore, I was not entirely sure how happy they would be with meeting and greeting Santa.

My four year old was perfectly content.  He launched himself onto Santa’s knee and had a good chinwag with him, explaining to Santa that he had asked him for Disney Infinity for the PS3 just to drive the point home.  I actually didn’t think he would ever get back down from Santa’s knee.  My six year old was a bit more trepidatious.  He was not prepared to sit on Santa’s lap so he stood beside him instead and spoke in a voice only hummingbirds could hear.  My ten year old was, of course, far too mature and cool for any such things so he just high-fived Santa.

We then ate a delicious breakfast.  The boys had pancakes, eggs and sausages with hot chocolate and fruit juice and I had a veggie omelette with a cup of tea.  There were also baked goods available so the boys each had a massive muffin before deciding they were starting to get bellies like Santa’s.

I definitely think we should build breakfasting with Santa into our festive traditions from now on.