This week’s Life Book lesson was way out of my comfort zone.  The tutor was Wendy Brightbill and she demonstrated her process of creating an abstract work of art through layering of different media and finding the tipping point between working intuitively and pulling it all together with intention.  Intuitive and abstract are both things I really struggle with.  I am, after all, a control freak and more of an illustrator than anything else.  But that is the point in following an art course that has such diverse teachers – it forces me to try new things and experiment a bit.  My piece did not evolve well.  I loved the first layer and then it just got uglier and messier and more incoherent rather than cohesive.  The thing that finally killed it once and for all was that I was way too “blocky” when applying some acrylic paint.  I tried some dribble to make it more organic again and then, rather inevitably for me, some spatter.  All was in vain.  Those chunks of colour were neither geometrically precise enough to be part of the intent of the piece nor random enough to work with the previous layers.  My choices were to either scrap the whole thing and forget about it (since I had no time in which to start over) or to just keep trucking and at least produce a finished outcome.  I decided on the latter so I grabbed my paint pens and started doodling.  It was still an ugly mess of a piece but I did at least really enjoy the doodles.  I was adding the doodles while making dinner which meant I didn’t have the time to overthink what I was doing which was actually quite liberating (if one ignores the stress of multi-tasking).  That doodle layer was, therefore, enjoyable.  I do like the colour palette and think that works and I may repurpose this painting as the cover of a completed art journal. 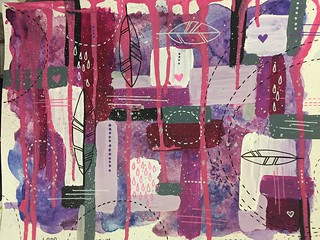 This week’s Life Book lesson was an “intuitive healing session” with Andrea Schroeder.  It was all about meditation, being intuitive and being playful, not worrying about making mistakes or about striving for perfection.  This process took me very much out of my comfort zone.  As I always do when creating without having a vision of what I want to create, I felt rather lost.  How I chose to approach the process was to make marks in my art journal while listening to the meditation video.  I used a medium brush loaded with watercolour so that I would not have that much control over the marks I was making and I just doodled away while listening to the video.  Once my page was filled with colourful doodles and the meditation had ended, I looked at the page and started a large doodle with India ink loaded on the brush again.  What emerged was a female figure holding a bird in her hand.  I have no idea where it came from or what it is about.  It’s not my usual style but – having no vision of something I was aiming for to compare it to – I am reasonably happy with the page. 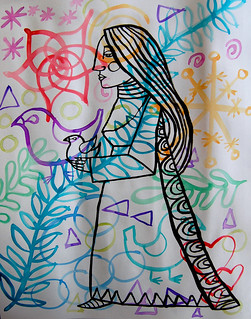 Those of you who have followed my mixed media efforts for long enough will know that I am kack-handed when it comes to stencilling.  I really cannot seem to get the knack of it.  If I get the pigment strong enough, there is usually blobbing around the shapes; if I keep the shapes crisper, it is usually at the expense of strong pigment.  Therefore, when I saw that this week’s Life Book lesson revolved around stencils, I knew I was in for a challenge and hopefully some progress.

This week’s lesson was taken by Lynzee Lynx and the thrust of the lesson was to use stencils we created ourselves and to use them in a layered mixed media piece.  We were encouraged to create stencils of any shapes that came to mind.  I used OHP acetates and cut one that was like a series of striped pebbles, one that was like some curvy arrowheads and one that was a trio of lozenge shapes.  The tutor used her stencils with spray paint but, having none, I sponged acrylic through the stencil shapes instead.  Oddly enough, I actually got the best results I have ever had from stencilling with good coverage and pretty crisp edges.  I wonder if it is because the shapes were larger.

We were to use the stencils intuitively and employ that same instinct to creating the background for the stencils and then layering on top of the stencil shapes.  Working instinctively never comes easily to me.  However, this time, with four kids under my feet and near constant interruptions, I did not have the luxury of time to get stuck inside my head.  Since necessity compelled me to work in a rush, I had to just reach for materials and quickly do something with them without over-analysing or planning.  Of course, I did lots of dribbling and spatter because that is something I really enjoy doing.

Interestingly, there were bits of this piece that I thought were a hideous mess at one stage.  The big cobalt blue blob was a mistake I made when distracted, dribbling the paint in one spot for far too long.  In the end, however, that pool of cobalt spattered with turquoise is one of my favourite elements in the piece.  Likewise, unlike the other spatter, I added the turquoise spatter after I had laid down the black stencilling and I worried it would look like the after-thought it was.  However, I really like the effect of the turquoise on the black.  I am not sure how I feel about the piece overall, however.  I think it lacks cohesion.  I think perhaps I ought to have stencilled the pebble shapes in black rather than gold as they draw the eye too much and the other gold elements in the page – dots created with various implements – do not successfully balance it out.  I did the doodling while watching a movie with my kids and I think in this case the not thinking about it led me to over-doodle, though I am happy with the variety of shapes I chose.

So the lessons learned this week are that I do better when stencilling larger shapes, that I need to find the right balance between working instinctively but not making a mess of things by not thinking enough, and that I need to trust that things I think are a disaster might just work out in the end. 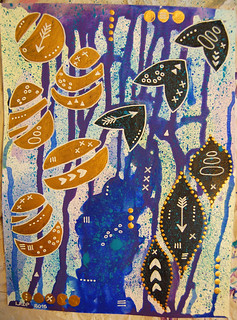 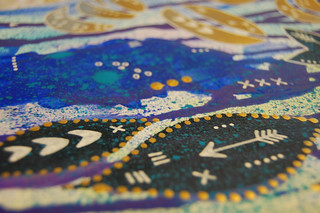 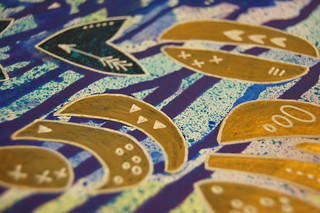 *Apologies for the wonky angles in the first photo*

The Documented Life Project’s theme continued to be doodles and this week’s prompts were to make a custom element and “Ride the energy of your own unique spirit”, attributed to Gabrielle Roth who I have never heard of I’m afraid.  I do try to conform to the parameters of the prompts, to create a direct response to at least one of them, but this week I did go off piste a bit.  Between my trip to New York City, Mr Pict being away in California and the kids being on Spring break, I just had to get cracking with a page regardless of not having had an idea emerge from reading the prompts.

I decided to ignore the quotation and, since I have somewhat exhausted my repertoire of doodles, I decided to interpret the idea of custom doodling a bit differently.  I decided that custom doodling could be interpreted as very quick sketching as the mark making involved is somewhat akin to doodling.  Since I had just returned from my trip to New York City where I saw the Statue of Liberty, I decided that Liberty would be the subject of my page.  I could not sketch in the field, of course, but I did the next best thing which was to give myself a very short period of time in which to sketch out a study of Liberty from my photographs.

I started by getting some colour down onto my page which I did with two colours of Dylusions ink sprays.  I then put down some very rough pencil lines just to help my placement of elements on the page.  Then I got my India ink and dip pen out and gave myself just a couple of minutes to sketch Liberty’s head and hand clasping the torch.  I then added some watercolour pencil for shading around the face and fingers.  I am quite pleased with how the page turned out. 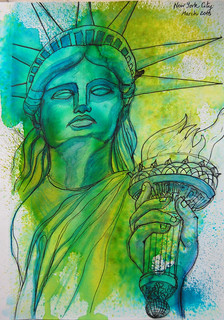 The Documented Life Project continues to have doodling as its over-arching theme and this week participants were encouraged to use doodling as a focal point.  The associated quotation was “Coming into Focus”. I, therefore, decided to make my whole art journal page be about the doodles.  Rather than doodles being one element among many, the whole drawing would be a mass of doodles.  Last week, I took a similar approach but in a colourful way; this week I decided to stick with monochrome.  I personally much prefer to doodle in monochrome as it helps me concentrate on creating pattern with line and shape instead of being distracted by colour and hue.

I am still intent on practicing human faces so I determined to draw a figure and to doodle in her hair and clothing.  As I have written before, I don’t zen tangle.  I am not zen or precise enough.  I do, however, find that undertaking this type of doodling is very calming.  Something about the focus required is soothing to my mind which is always otherwise racing around, planning and mentally checking off multiple lists.  So that is how I fulfilled the focus part of the prompt.  It was not about a visual focal point for me but was more about how I benefit from working in such a focused way.

This past weekend, I had my monthly art journalling MeetUp group, which is held at a coffee shop, and I took my 7 year old with me since he is getting into art journalling now too.  This drawing, therefore, was created using my travel art kit.  Instead of using India ink and a dip pen, therefore, this was done using a black gel pen.  I smudged the arm a bit, which was annoying, but otherwise the gel pen was a decent enough substitute for the ink. 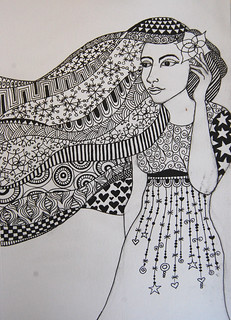 This week’s prompt from the Documented Life Project continued the theme of doodling.  The specific challenge prompt was Borders and the journal prompt was a Madonna lyric,  “Borderline feels like I’m going to lose my mind.”  I love doodling.  I don’t have the patience or precision for zentangle but I like filling spaces with doodle shapes and adding dots and dashes here and there in my art work.  I don’t, however, tend to use borders, especially not decorative ones, in my art work so that for me was the challenge.

Since it was Mr Pict’s birthday, time was understandably tight so I decided to keep it simple.  As I often do for some peculiar reason, I defaulted to drawing a funny bunny.  I framed it within a border which I doodled in black to keep it monochrome.  I then doodled the negative space created with a spectrum of coloured pens.  The positive shape of the bunny then emerged from the negative shapes within the drawing, if that even makes any semblance of sense. 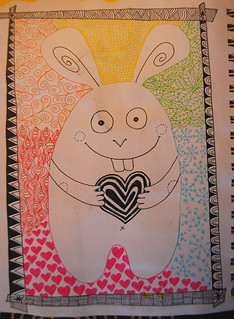 PS  If you want to see a new horde of my zombie bunnies, they have just invaded my art blog.