We had a Snow Day yesterday with schools closed and my preschool closed due to the winter storm and the bitter temperatures.  It was definitely a day for hibernation.  I tidied and read and baked and found time to work in my art journal.  My January Art Snacks box had just arrived the previous day and I was eager to experiment with the contents.  I used the Art Journal Adventure prompt as my starting point – year of the dog.  As a cat owner, that might be a bit treacherous but it has been a while since I drew a dog so I thought I should take the opportunity to practice.  My dog ended up super goofy and long and bendy but he’s playful and that is what guddling about in my art journal is all about.  It was also fun to experiment with the products in the box, all of which I liked and all of which I will use again and again.  The photos are not great thanks to the very dull lighting conditions and the fact that I was wrestling one of my cats at the time.  He definitely did not approve of this dog illustration. 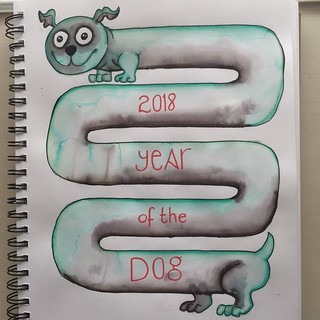 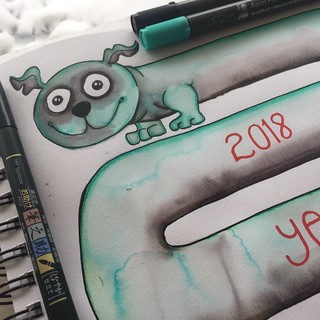 After lunching in Utah, we crossed the border into Nevada.  Too early to check into our hotel, we actually drove straight through Las Vegas and headed towards the Hoover Dam.  Our route took us past Lake Mead and Mr Pict decided to be spontaneous and head to the beach.  The air temperature was at least 110 degrees and the water temperature of the lake was apparently 83 but the kids were up for the idea so I went with the flow.

Lake Mead was created by the construction of the Hoover Dam and is apparently the largest reservoir by volume in the country.  I suppose that is what is required if you are going to have people build cities in the desert.  The majority of its water comes from snow melt and, strangely enough, it experiences a lot of drought and has not been at capacity for over 30 years.  Of course, if the water level dropped too low then the Dam would cease to function so all sorts of engineering has gone into preventing that from happening.  An awful lot of resources go into allowing cities to continue existing in the desert.

Lake Mead might be a National Park but it definitely lacked the facilities and polish of all the other National Parks we had been to.  It reminded me a lot of the lake we had visited in West Virginia last year.  That wasn’t a good thing.  The surface was so bad I thought our car axle might break from driving on such uneven roads and then the beach was rubbly, grubby, muddy, and messy.  Nevertheless, the kids quickly changed into their swimming clothes and merrily galloped into the water.  Mr Pict and I stayed on the shore and did not even paddle our feet.  It just looked so gross.  Our feral kids didn’t seem to mind the mudlark quality of their experience. 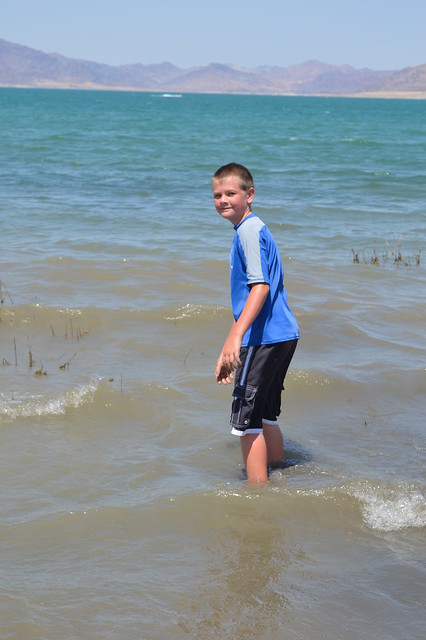 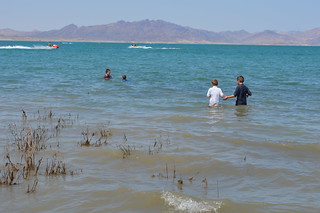 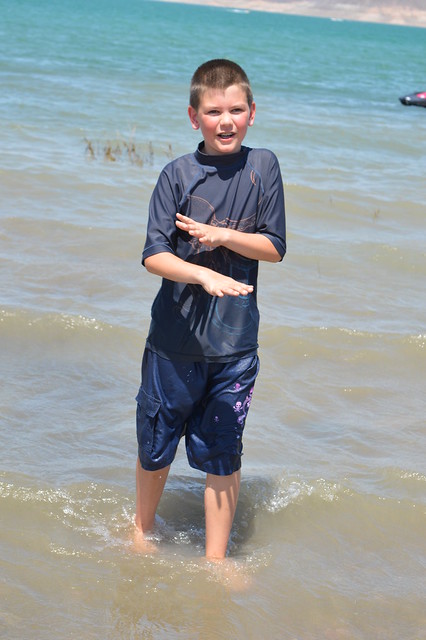 When we reached the Hoover Dam, the air felt like a constant blast from a hot oven.  It was pretty grim.  Our kids actually had zero interest in visiting the Hoover Dam.  None whatsoever.  When I last visited the Hoover Dam, it was possible for tourists to drive across it.  That is no longer permitted, for understandable security reasons, so wasn’t a compromise we could offer the kids.  Instead we had to park up and then walk along the crest of the Dam.  Trying to persuade the kids that they wanted to spend some time in the baking, parched heat to see a work of engineering they had no inclination to see was a bit of an ordeal to say the least.  Our parenting is a benevolent dictatorship rather than a democracy, however, so we prized them out of the sanctuary of the air conditioned car and forced them to see the Dam whether they appreciated it now or later. 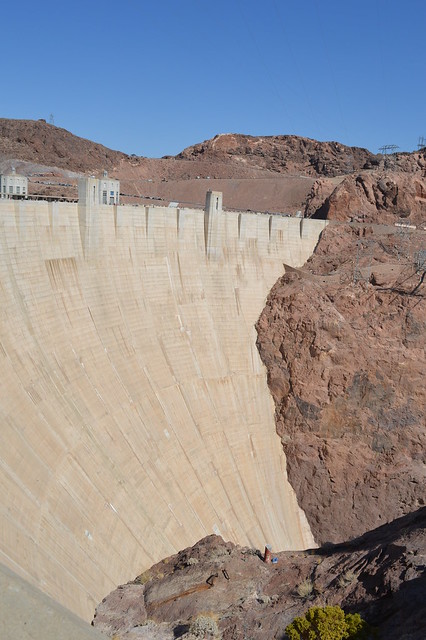 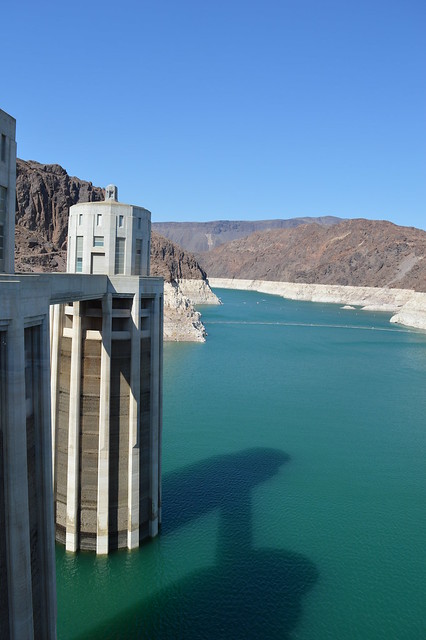 The Hoover Dam was famously built during the Great Depression and put thousands of people to work (and killed about a hundred of them).  It created the aforementioned Lake Mead and generates the electricity that allows for cities to exist in the middle of the desert.  It also created nearby Boulder City, founded to house all the workers.  It was a massive undertaking and an amazing feat of engineering involving much engineering but incredibly it was completed two years ahead of schedule.  It is possible to view the Hoover Dam as symbolising good and bad aspects of America: it is large and impresses through its scale; it serves a practical function rather than just being for show; it is all about power; it is apsirational, given that it allowed for the creation of a city in a location where a city had no business being built; it was massively challenge yet was accomplished; and it brought people together in a time of terrible desperation; on the other hand, however, the environmental damage was and continues to be pretty appalling; its creation was disastrous for rural communities, particularly indigenous people, because freedom for some is so often at the cost of freedom for others. 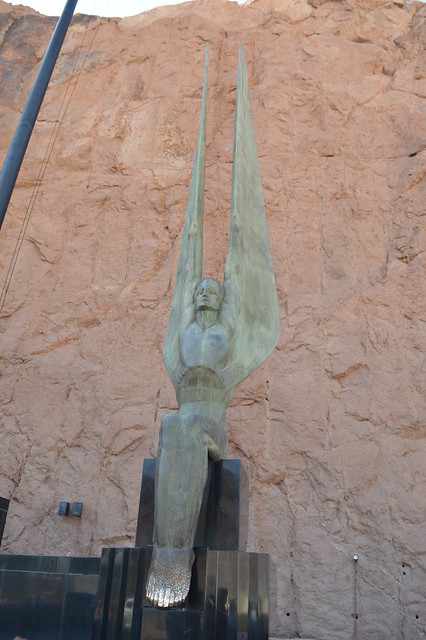 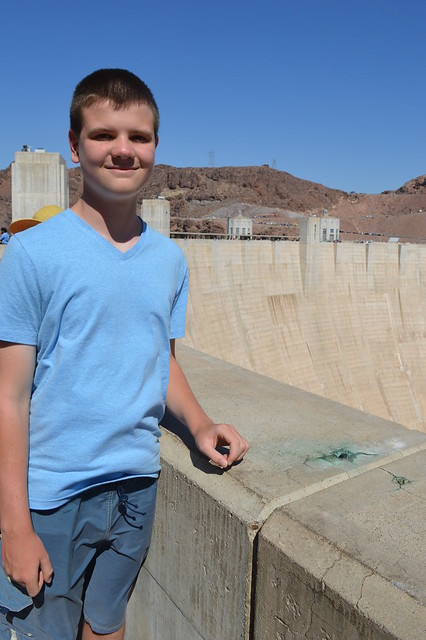 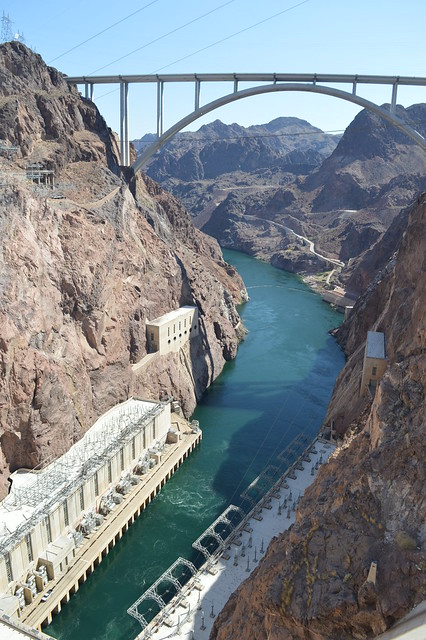 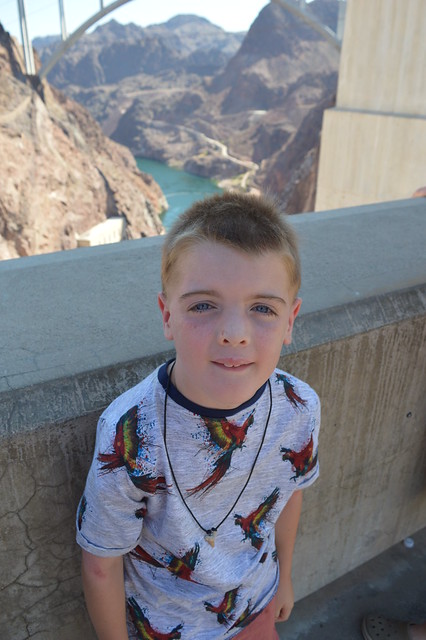 The kids remained resolutely uninterested in the Hoover Dam.  We were not as fussed about them being impressed with it as we had been about them seeing the Grand Canyon but it is another one to file under “One day they may be grateful”.  Their reaction was more a desultory, “Yeah, it’s big. Can we get out of this heat now?”  The younger boys did perk up when we happened across a memorial to and grave of  a dog who had been the mascot of the Dam.  He accompanied the workers everywhere, he had a packed lunch each day, and chased ring-tailed cats in his free time.  Tragically, one day a worker accidentally drove over the dog as he slept and that was the end of the beloved mascot’s life. 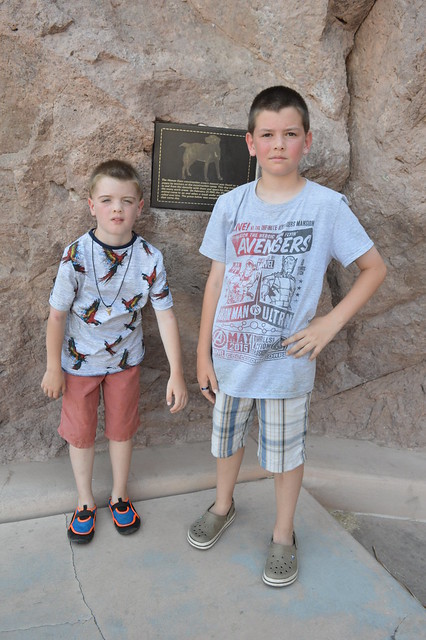 Cerberus was a three-headed hellhound who guarded the entrance to the Underworld.  Except sometimes he was not three-headed.  Sometimes he was depicted as having a whole bushel of heads and other times as having just one. Apparently – and I did not know this before I embarked on my drawing – he also had a mane composed of snakes, the tail of a serpent and lion’s claws.  I bet he was at the pound for a long time before he was rehomed.

Cerberus was another of the monstrous offspring of Echidna and Typhon, making him a sibling to the Chimera and Hydra.  The capture of this monstrous beastie was one of the Labours of Heracles.  Ultimately the real challenge for Heracles was entering and exiting the Underworld while being very much alive.  When it came to capturing Cerberus, all he actually had to do was ask Hades who in turn set him the task of overpowering the dog without recourse to weapons.  Heracles, with his legendary strength, found this to be no bother at all.  It’s almost as if Hades wanted shot of Cerberus so as to avoid the massive pet food bills ….

As I had done with his siblings, I chose to depict Cerberus as a young’un.  I asked myself what a monstrous three-headed puppy would look like.  My 7 year old has an obsessive notion for a pet pug.  He’s even picked a name out for it: Russell.  It’s not happening.  However, this meant that I did a rough sketch idea for a pug version of Cerberus.  I just could not get the scale to work though: three round heads would not fit on to such a short and stocky body.  Trying and failing to resolve that problem then resulted in my brainwave of making Cerberus a dachshund.

In order to maintain some of the monstrosity of Cerberus – as opposed to him being the type of critter my kids would beg to have as a pet – I did add some sharp claws and painted him red.  I thought red was the most obvious colour for a hellhound.  Though I’ve never been a fan of chartreuse so maybe that would be the colour of hell.  The heads, however, don’t have even a modicum of menace in them.  They are just dappy, sloppy and sappy, like those of a pet puppy.  Clearly Cerberus would have to go to dog training school to learn how to be a ferocious beast who ate raw flesh and protect the gates of the Underworld. 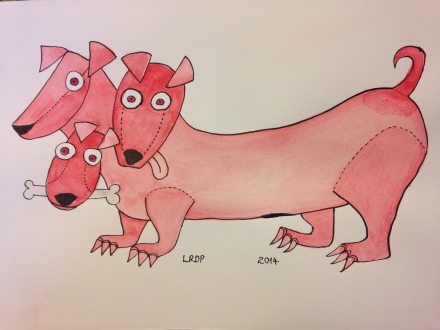