This week’s Documented Life Project prompt was to pick a fantasy vacation spot – money no object – and generate a packing list for the chosen destination.  I am not at all short on places that I could choose from.  I love travelling and have not done nearly enough of it in my life thus far.  I have only travelled on two continents and did not even make it to very many countries in Europe when I lived on that continent for all those decades.  If time and resources had permitted, I certainly would have done a great deal more travelling in my life. I pondered picking somewhere like Australia or Egypt or Italy (which I have been to but would love to return to) or the Scandinavian region or the Galapagos Islands.  I considered the Orient Express.  I even thought about creating a page based on the preposterously ambitious notion of a round the world tour.  I even thought about a little literary detour involving creating a page inspired by the fictional journey of Phileas Fogg.  With the latter two plans, I even came up with (in my head) a visual of what my page might end up looking like.

However, this time of year being what it is and my art time being consequently squelched in my schedule, I decided to downsize the ambitions of my page and perhaps my destination. I have an ambition to visit all 50 of the United States.  My husband is only missing three of them – Alaska, North Dakota and Oklahoma – whereas I have only been to 25.  I thought I had 26 under my belt until I started counting them up for the purposes of this challenge and found I had 25 left to do.  So I am stuck at the half-way mark.  In my first 14 months of living in America, I have actually not gained a single new state as I have merely revisited ones I have already travelled to as part of past vacations.  In our pre-parenthood years, Mr Pict and I did a lot of road-tripping around the States which is why I have as many as I do and so I had the idea that my vacation for the purposes of the prompt should be a road trip to collect the 25 states I have not yet visited – maybe going by plane to Alaska and certainly Hawaii.  So I perhaps downsized the “fantasy” element of the prompt and swapped it for something I might actually accomplish.

I started by giving the journal page a rough wash with brown watercolour.  I was thinking of those old map graphics they use in movies to illustrate a change of location, usually with a red line moving between dots on the map.  Think Indiana Jones films.  I then printed out a copyright free outline map of the US.  My intention had been to trace it onto the page but pressure of time meant that I instead used the print out itself to create a flap on the page.  I coloured in the states I have already visited with brown pencil, not wanting to use a wet medium lest the printer ink run.  I may have been to half the states but all that white remaining on the map only goes to illustrate that I have visited nowhere near half the land mass of America, even if one only considers the contiguous states. It’s a wide white stripe that runs down the middle of that map.  Around the flap I used brown ink to write down the names of all of the states I still need to visit.  I added an arrow to the flap – using a stamp – to indicate that it should be lifted.  Beneath the flap, I rather hurriedly jotted down a list of the things I would pack for a round America road trip.  I did not include clothes or personal hygiene items.  Let us just assume I pack those anyway.  I guess tea bags were a higher priority for me than things to actually wear. 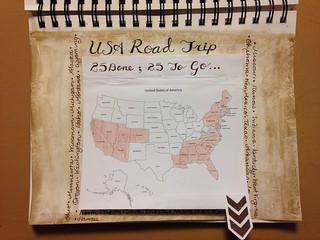 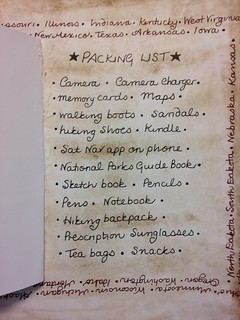 Could this page be more inspired?  Yes indeed.  However, given I probably spent no more than 15 minutes on it I don’t think it is too bad.  And hopefully in the future I will have cause to create a journal page about me visiting my fiftieth state.