Last week’s Life Book lesson was taken by Andrea Gomoll and was all about painting a figure who was caught between an area of darkness and an area of light.  The medium was primarily watercolour, which I always enjoy working with.  I decided to place my figure in the centre of the paper with her hair flowing upwards to create a clear dividing line between the dark area and the light area.  I enjoyed letting the paint in those background areas bleed into one another and create blooms.  I built the flesh tones up gradually, using a neutral palette first and then layering the stronger colours on top, dividing the face between the cool blues of the dark side and the warm yellows and pinks of the light side.  I possibly should have gone more dramatic with the shading and lighting on the face.  I grounded the piece by painting black into the torso area of the figure and then tried to make the background and the figure cohere by adding spatter in white and black watercolour. 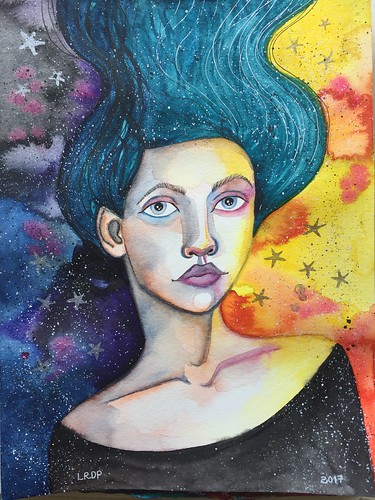 Driving in the dark the other night, I suddenly realised I was having to concentrate really hard in order to make out the road markings and it dawned on me: no cat’s eyes!  Now maybe this is just a PA thing rather than an America wide thing but I was a wee bit taken aback by the lack of cat’s eyes in the road surface just because I am so used to having them there to provide guidance as to the road markings when there is no other light source but the car’s own headlight beams.  Just in case you don’t know, reader, cat’s eyes are pods of reflective glass set into the road surface so that they shine when hit by the car’s headlights and they are not only laid out in line with the road markings but the colour of the cat’s eyes indicates the type of marking – lane, slip road, hard shoulder.  I had not realised I was habituated to using them to navigate roads at night until I no longer had them.

In other driving news, I still have not even contemplated driving on the wrong side of the road.  However, I have discovered that my reverse parking sucks because my spatial awareness for reverse parking has always been from the other side of the car.  It is just as well American parking spaces are wide because I end up squint each and every time.  It doesn’t bode well for my ability to parallel park given that I was pretty sucky at that even in the UK.  And that in turn does not bode well for my ability to pass a driving test here.  I may have to cruise around industrial estates in the evening in order to practice just as I did when I was 17.  It’s weird being catapulted backwards in experience levels in such ways.