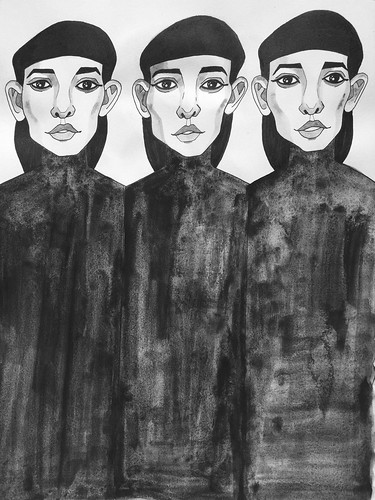 This weekend, I grabbed some small parcels of time and used them to create an illustration in my art journal.  I used last week’s Art Journal Adventure prompt, which was to use an element and repeat it at least three times, and combined it with a prompt I had missed that involved the number 5.  The idea of repetition made me think of clones and that made me think of the pod people from the movie ‘Invasion of the Body Snatchers’ and then that segued in my brain to thinking of the book ‘The Midwich Cuckoos’ and thus I arrived at a decision to draw five clone children with expressionless faces and soulless eyes.  I did the grey and black inkwork first and had intended to leave the hair white as a nod to the movie adaptation ‘Village of the Damned’ but, on a whim, I decided to add a splash of colour with red ink.  I am undecided as to whether that was a smart move or not and my children – who I use to judge my art work – are split 50/50.  What do you think? 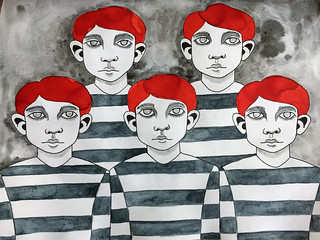