Something I am certain you know about me is that I love cemeteries.  Even when I don’t have any sort of connection or personal interest in a cemetery, I love to wander around and explore cemeteries and graveyards.  I enjoy the restful tranquility and appreciate the memorial symbolism and funerary sculpture.  Something you may know about me is that I am a total family history nerd and, therefore, when a cemetery has personal significance to my genealogy then it is all the better.  When we were visiting family in update New York, therefore, it was the perfect opportunity to have some family history fun while exploring cemeteries.  I do not have to have a DNA connection in order to be absorbed in a family’s history.  I have researched the genealogy of my step-grandfather, for instance, and when Mr Pict and I became parents, I decided to take on his family history as the custodian of that information for our children – whether they like it or not.  The dead folks I was pursuing in Buffalo, therefore, were not my own but were indeed the ancestors of Mr Pict, specifically his Strickler ancestors.

The Stricklers had arrived in America from Germany at the turn of the 18th Century, fleeing persecution and discrimination for their Mennonite beliefs.  They settled in Pennsylvania (so I have lots of Strickler adventuring to do in future) but, two generations later, Mr Pict’s 4x great-grandfather, Ulrich Strickler, set out with his family north, first to the Niagara River area before settling in Clarence, in New York’s Erie County.  It was in Clarence that we found Ulrich.  Finding the cemetery was a challenge.  It doesn’t appear in GPS listings because it is disused, was never a public cemetery, and now sits on private land.  My research had narrowed the search area and happily my 12 year old caught a glimpse of a distant sign flashing white in the sunlight as we drove a circuit of the relevant streets for the second time.  We disembarked from our cars – as there were 10 of us on this mission – and in no time at all we were in the shady spot where Ulrich Strickler (1767-1838), his wife Magdalena, and various of their relatives are interred.  We had three generations of Stricklers gathered at the grave of their direct ancestor.  That was pretty cool for me as a family history nerd.  The name of the cemetery incidentally is the Strickler Pioneer Cemetery and we also stopped off on Strickler Street for a quick photo of my husband, his mother, and her cousin. 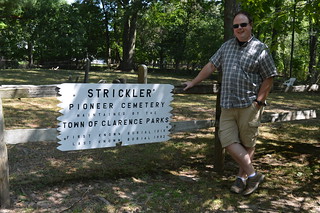 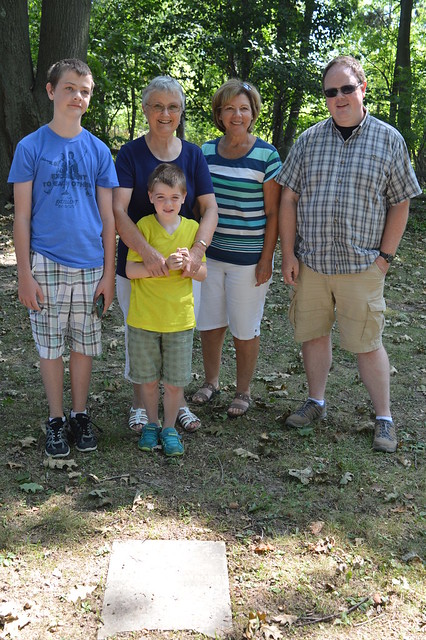 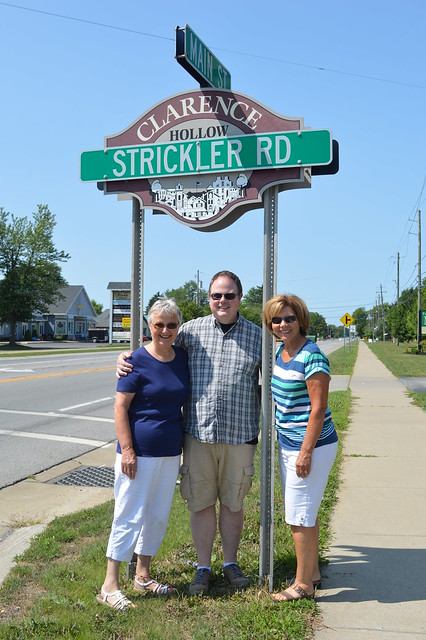 Next up was Forest Lawn Cemetery.  When I got the other family members on board with the idea of my cemetery trip, my mother-in-law and her cousin had thought they were signing up to visit two cemeteries.  Forest Lawn was the one they had not anticipated and they seemed stricken at the thought of a visit there.  That is because Forest Lawn is a vast city cemetery, covering almost 270 acres and containing over 150,000 graves.  It is where many of Buffalo’s wealthy, successful, and famous residents ended up and is, therefore, home to some spectacular mausoleums and statuary.  I agreed, however, to focus my attention on finding the Strickler graves and I, by and large, kept my promise.  I think the relatives anticipated we would be in the cemetery until dark trying to locate the graves but – thanks to the wonderful volunteers of Find A Grave – I was prepared with the two lots where the most direct ancestors were buried.  It was my father-in-law who found the graves of Daniel Strickler, his second wife and children from both marriages.  Daniel (1809-1901) was the son of Ulrich so these were the 3x Great-Grandparents of Mr Pict – or a full six generations above our kids if that makes more sense.  My mother-in-law has just entrusted me with caring for a blanket made by Daniel’s wife, Eliza Faust, so it was great to see her grave too.  In a nearby lot, it was my mother-in-law’s cousin who almost literally stumbled upon the grave of another of Mr Pict’s 3x Great-Grandparents, this one being Sarah Augusta Tyler, nee Clapp (1831-1920).  It is she who is the connection to John Alden and Priscilla Mullins who came to America on board the Mayflower. 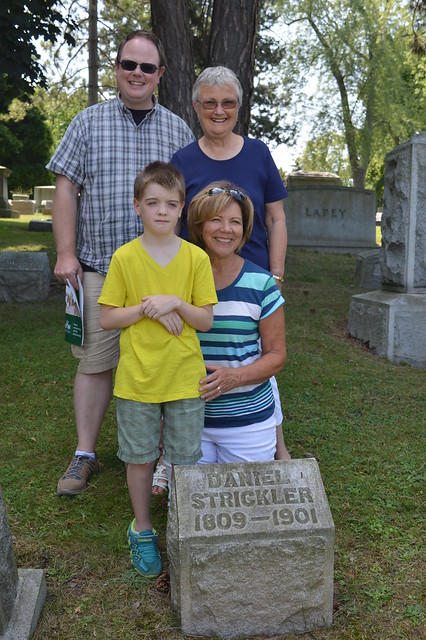 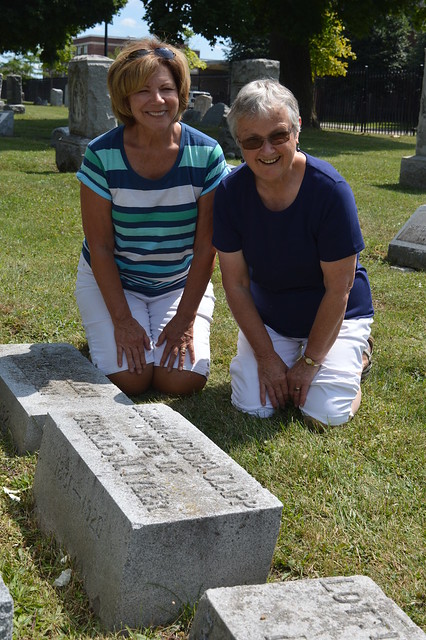 Despite my commitment to stick to the clusters of Strickler graves in Forest Lawn, I am afraid I did break my promise.  Since we have found ourselves visiting a number of Presidential graves, it did not seem right that I should be in Forest Lawn and not stop off to see Millard Fillmore.  The 13th President is certainly one of the more obscure ones, and perhaps would be even more so if not for his memorable name, and he frequently appears in lists of the nation’s worst presidents.  He is also controversial for a number of reasons but especially his enactment of the Fugitive Slave Act.  Still, I thought I would pop by to have a gander.  In contrast to the more elaborate presidential graves we have seen, Fillmore’s was a simple obelisk.  Nevertheless, it was easy to find thanks to the flag flying above it. 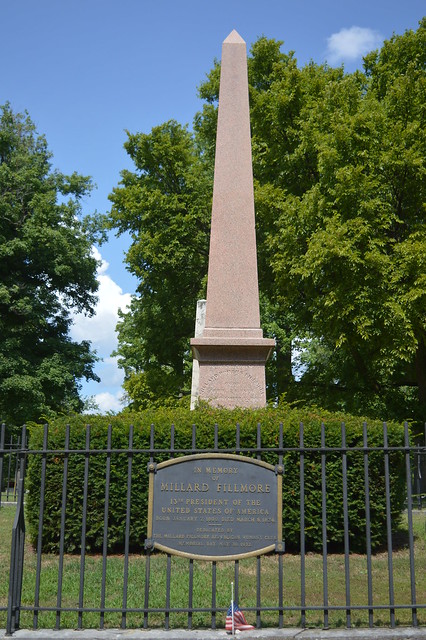 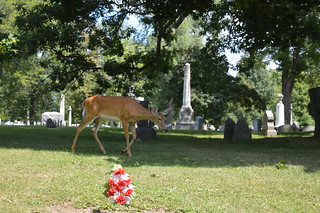 I also visited the grave of Red Jacket.  I had, however, successfully convinced everyone of a family history connection so they were agreeable to seeing his grand statue, which is sited near one of the cemetery entrances.  Red Jacket (Sagoyewatha) was a Chief of the Seneca and is, of course, famous in his own right.  However, his connection to Mr Pict’s family history involve his remains.  Red Jacket – and many other Native Americans – were originally buried in an Indian Burial Ground that was on land opposite the Stricklers’ houses.  Not being keen on this, the Stricklers successfully petitioned for legislation that led to the closure of the burial ground and the removal of all of the remains, most of which ended up in Forest Lawn, including those of Red Jacket.  Therefore, Red Jacket is only commemorated in Forest Lawn because of the prejudices and insensitivity of Mr Pict’s ancestors. 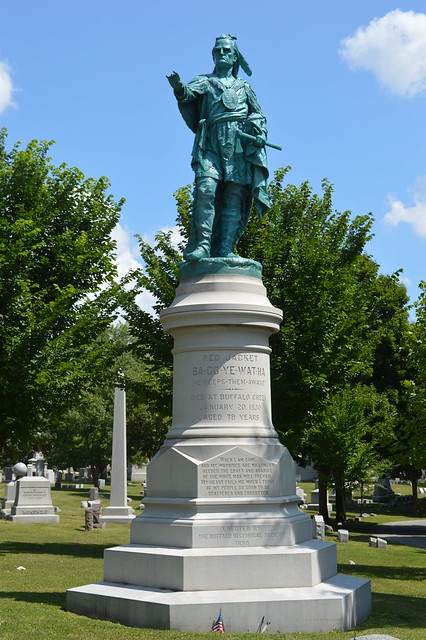 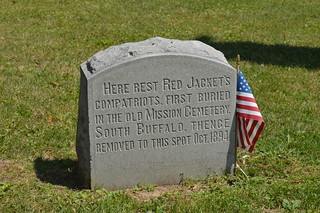 All of which is a neat segue into the next location of the family history trip which was to Buffum Street, where generations of Stricklers had owned property and lived and where the original Indian Burial Ground was located.  One of these, at number 49, is currently the focus of a restoration project given its significance as the oldest extant house in South Buffalo.  My mother-in-law and her cousin explained some of the history of the house and then we all wandered along the street to see two other houses that had once been Strickler residencies.  While the older family members chatted with the current occupants, I took the kids across the street to the Indian Burial Ground.  I felt it was important to impress on them the connection between their family history and local history. 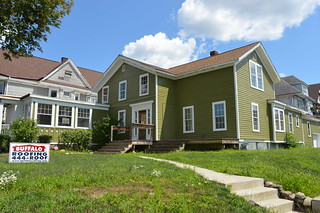 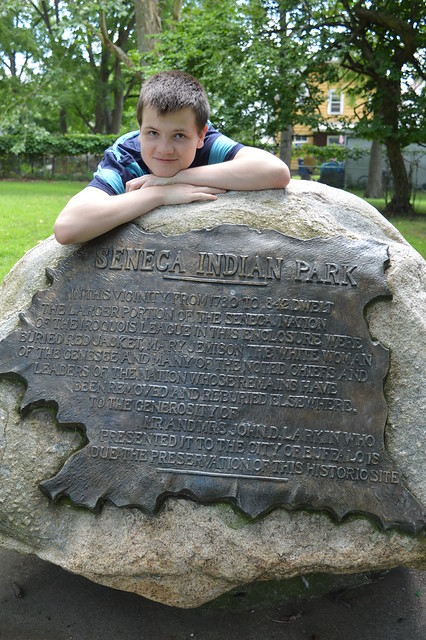 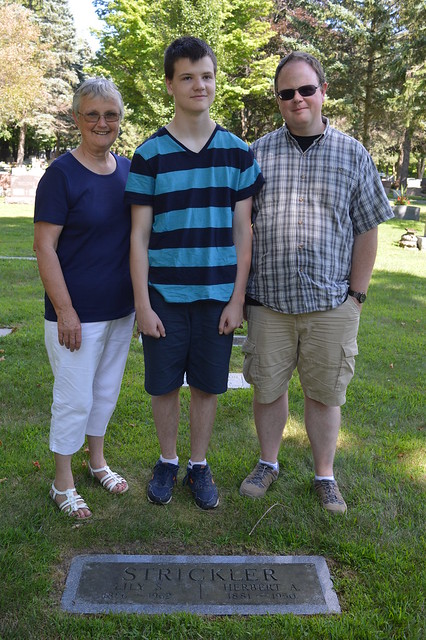 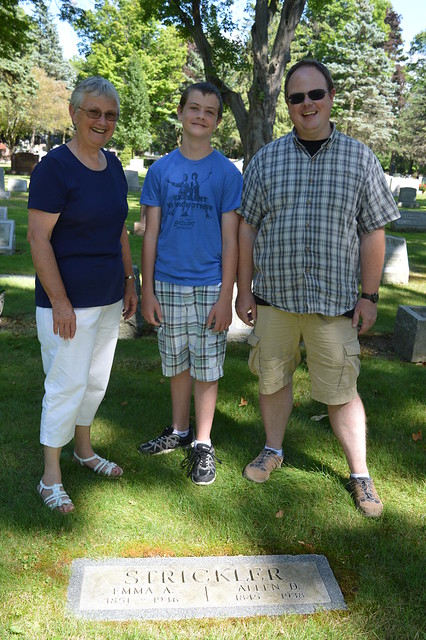 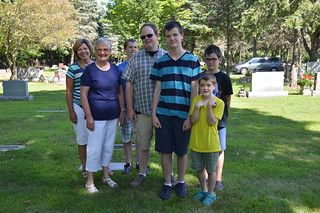