My kids and I are all movie nuts.  We love to watch movies for entertainment but we also enjoy analysing the films, discussing the themes and dissecting the details.  We like to draw characters and scenes from films and my kids also like to make their own movies.  My 11 year old currently wants to be a Director and my 10 year old wants to be a cinematographer – or a taxidermist.  It was, therefore, an absolute Must Do that we take the boys to Hollywood so – topped up with energy after our meal at Saddle Ranch – we headed to Hollywood Boulevard.

The streets were absolutely heaving with people and everyone was moving unpredictably as they would suddenly stop to read a name on a star in the pavement (sidewalk) or to pose for a photograph or to quickly dodge someone trying to sell something.  It was the type of crowded situation I would have found quite stressful had it not been for the enthusiasm of my kids.  They were running from star to star trying to find the names of some of their favourite actors and directors.

The Hollywood Walk of Fame is famously a stretch of the street in which pink terrazzo stars have been placed, outlined with brass and with the name of the person being celebrated in brass letters.  To see my children running around, however, you would have thought that the stars were the celebrities themselves.  The Littlest Pict was delighted to find the star dedicated to Mickey Mouse and they all enjoyed finding the collective star for The Munchkins.  My middle two sons are comic book geeks so they were especially thrilled when they found actors associated with superhero or supervillain roles, whether it was Burgess Meredith from times past or contemporary Chris Pratt. 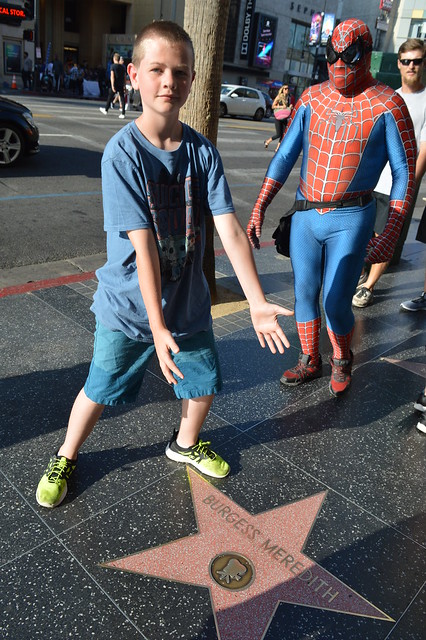 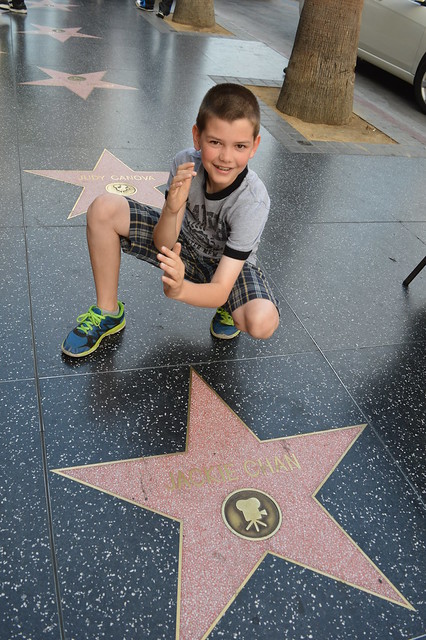 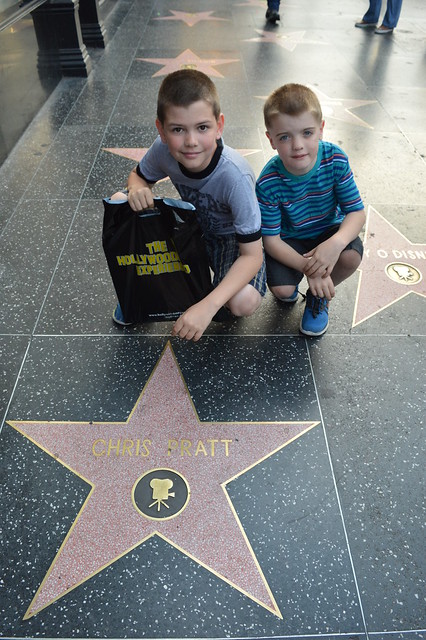 Observing how enthused they were by stars set in the pavement, I knew they were going to explode with excitement when we entered the courtyard of Grauman’s Chinese Theater (known as Mann’s Chinese Theater during my childhood).  The cinema opened in 1927 and has been the location of countless movie premieres – including ‘Star Wars’ – and a few of the Academy Awards ceremonies.  My kids were not there for that slice of movie history, however; what they were there to see were all the hand- and footprints in concrete slabs in the forecourt of the theatre.  The origins of the tradition are unclear but all versions seem to agree that it was an accident, of someone stepping into unset concrete, that kicked the whole thing off.  After that, movie stars and directors would immortalise themselves in concrete by placing their hands, feet, and sometimes other objects into the concrete and then autographing it.

There must be a couple of hundred celebrity prints in that patch of ground and I am pretty sure my kids visited each and every one.  Upon arriving at the theatre, they scattered to different corners and would yell to each other to come and see who they had found and yell to me to come and take their photos beside the slabs.  As little movie geeks, their cinematic interests are quite diverse.  They were every bit as excited to place their hands into those of Abbot and Costello as they were to see the prints – including wand prints – of the Harry Potter cast or of Harrison Ford or Morgan Freeman.  I had favourites from my previous visit to Hollywood (in 2000) and enjoyed seeing those again.  I always loved watching Harold Lloyd when I was wee and remembered loving seeing that he had drawn his round framed spectacles in the concrete and I was happy to see that his slab was still there.  Other favourites of mine were James Stewart and Gregory Peck.  My kids meanwhile – with their younger cousin in tow –  loved seeing the prints of the likes of Hugh Jackman, Jack Nicholson, George Clooney, Tom Hanks, Leo the MGM Lion, and Leonard Nimoy. 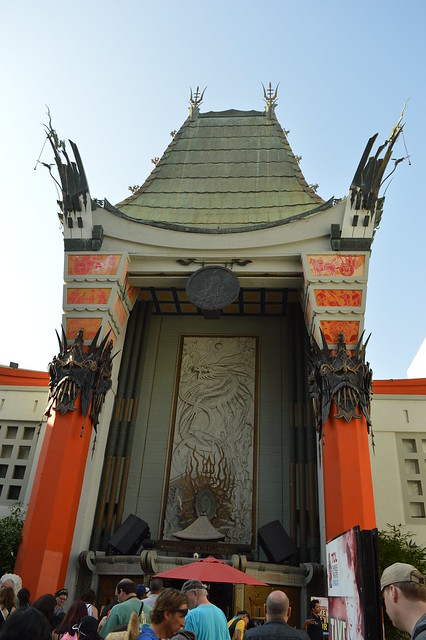 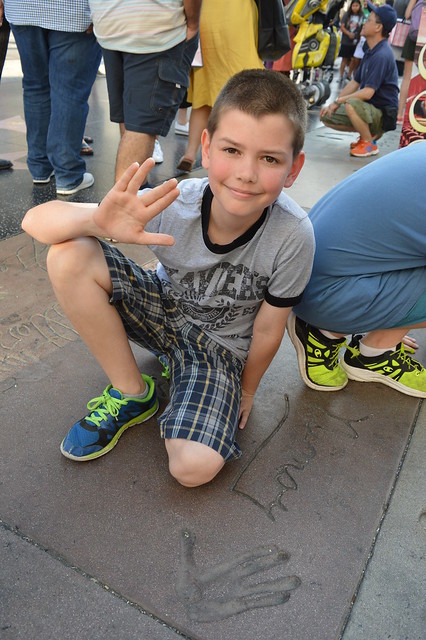 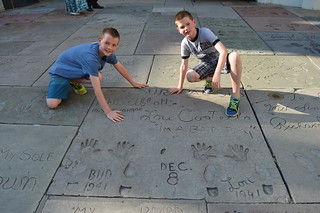 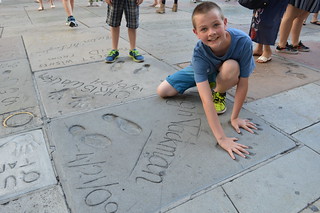 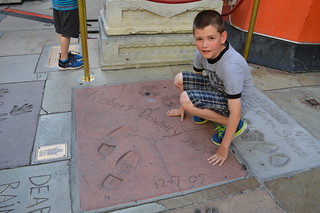 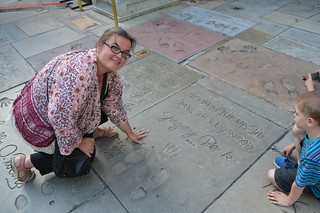 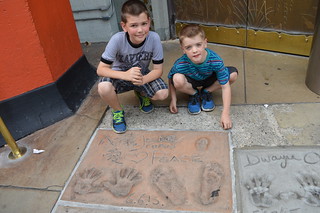 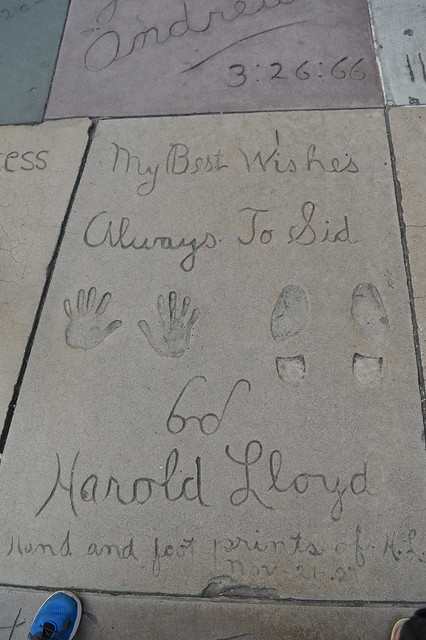 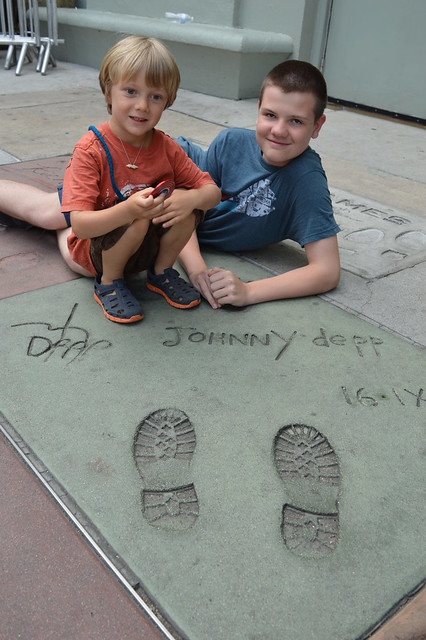 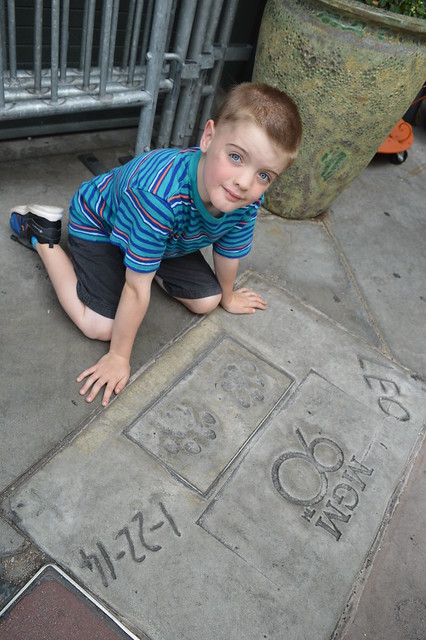 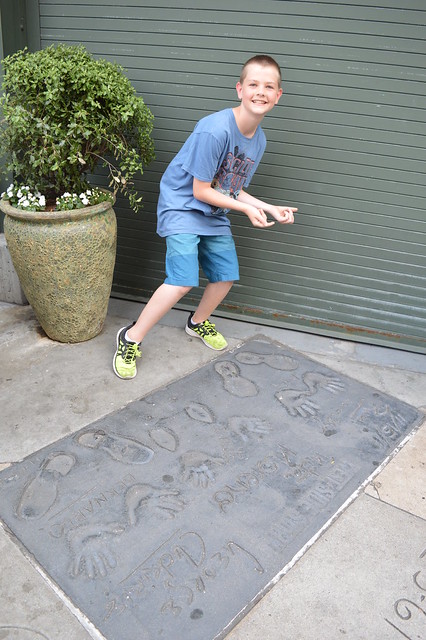 We also had a treat just people-watching as we fought our way through the crowds.  There were lots of people dressed up in costumes, earning money by posing for photos with tourists.  A Spider-Man who was definitely not a teenage Peter Parker beneath the spandex was especially keen to latch onto my kids but happily they were not biting.  There was also a Yoda looking as if Yoda had spent his exiled years on Dagobah eating nothing but pizza, chugging beer, and smoking 60 cigarettes a day.  Best of all, however, was Wonder Woman.  What made Wonder Woman wonderful was that we saw her get into a fight with an elderly chap on the street.  This elderly chap had been making my kids snort with laughter as he was carrying a placard advertising “booty slap massages”.  Well, Wonder Woman was having none of his misogynistic nonsense and set to informing him how to market his questionable massage skills without being condescending, intimidating, or belittling towards women.  Of course, the old sexist decided to argue back and the whole things became quite the entertaining spectacle.

We had planned to extend our Hollywood day into the evening by letting the kids go feral in Griffith Park and taking them to the Observatory.  We jumped in our cars and started the ascent up the hill, however, only to discover that the entire route up was one massive traffic jam.  Just a little further up and we noted that people were parking on the sides of the already narrow road and were then trudging up to the summit.  With cars parked on both sides of the road, there was no opportunity for even a U turn when we reached the point where official notices informed us that all the car parks were full.  When I had been to the Griffith Observatory before, there had been maybe a dozen other visitors.  I can only assume, therefore, that some special event was happening.  Either that or the place had become incredibly popular in the intervening 17 years.  So we slowly snaked our way up the hill and then we slowly wound all the way back down again.  No Griffith Observatory for the kids on this trip.  It was not meant to be.  Instead, we took a meandering route back to Venice via Mulholland Drive and Laurel Canyon, as low fog rolled in from the sea and the lights of the city sparkled and shimmered in the darkness.