My third son was gifted a session at Go Ape for his 11th birthday.  My oldest son had done Go Ape back in Britain for his tenth birthday but this was a first experience for the other boys.  The three older boys were eligible to do the full course under the supervision of Mr Pict and their grandfather.  My youngest son, being too wee for the full course, had a ticket to spend an hour on a junior course which my mother-in-law and I could supervise from ground level.

It was just as well I could supervise from the ground as I don’t think I could have managed even the junior course without my fear of heights causing me to go into a panic.  The staff at Go Ape were fantastic.  They were competent, of course, but they were also great with their encouragement and praise and creating challenge.  My youngest son – who is completely fearless – got the hang of the course pretty quickly so they encouraged him to try and beat his own personal record, then to do one of the routes backwards, and to try different types of jump on the zipline.  He had a whale of a time and absolutely loved it. 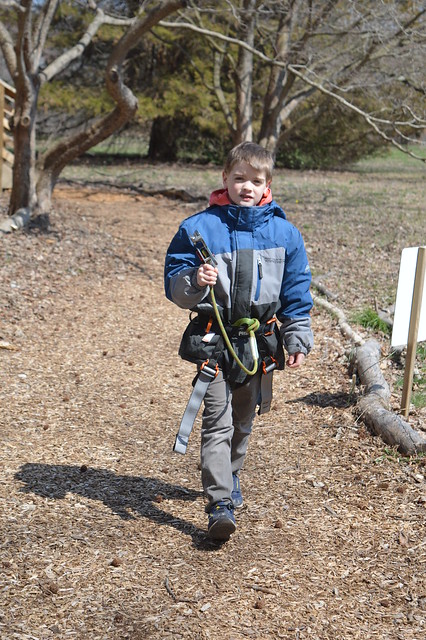 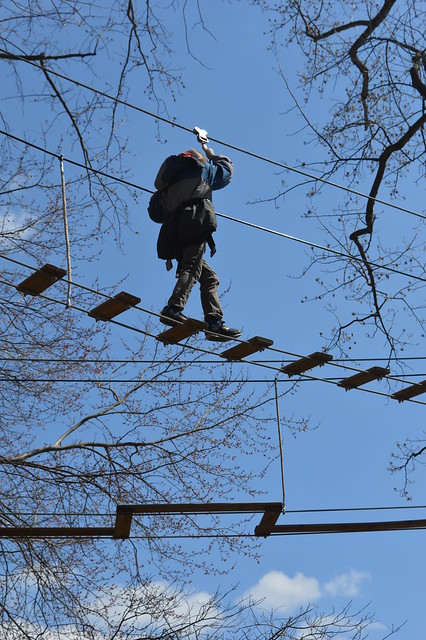 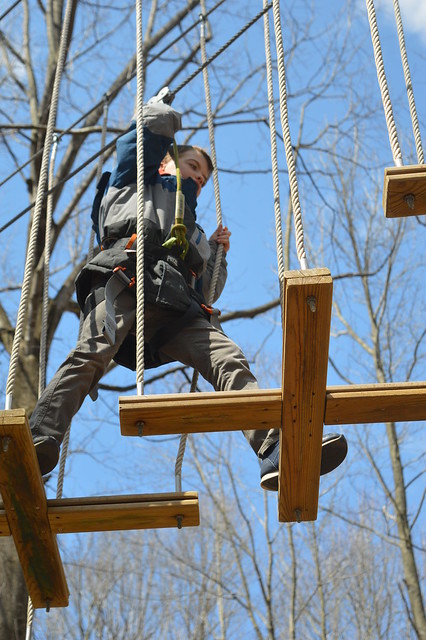 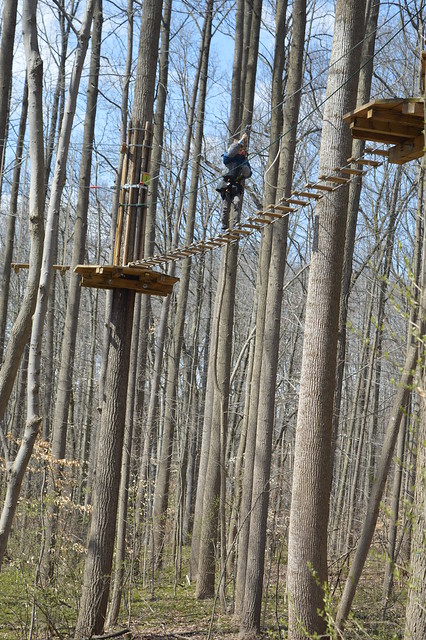 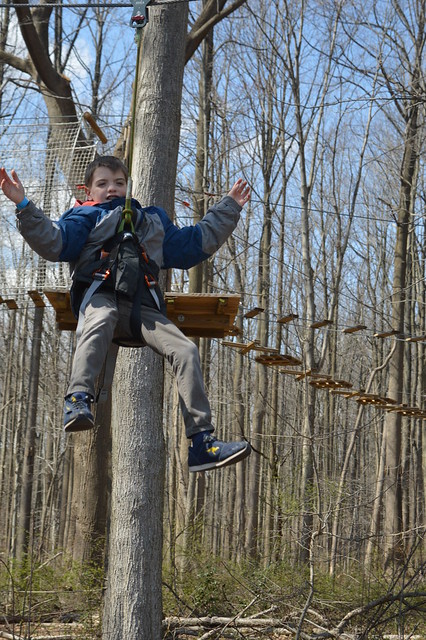 Once our time was up with the junior course, we headed into the woods to track down the others and see how they were getting on.  We had seen them getting fitted into their harnesses and being trained and at that time they were all smiles and excitement.  We wondered if, almost two hours in, they were flagging or finding it was getting too challenging.  We met up with them just as they were doing the fourth stretch of the course.  They were definitely feeling challenged but were still enjoying the experience.  It made me queasy seeing how high up they were.  Shortly after we met up with them, they had a choice to make as to whether to take a difficult route over to a platform or an extreme route.  My oldest son wanted to do the extreme route which meant his father had to take a deep breath and accompany him.  They had to move between a series of short scramble nets which were dangling in the canopy of the trees.  It was pretty terrifying to watch even from ground level.  Meanwhile, our birthday boy was having an attack of nerves as he found the combination of height, wobbly platforms, and wind to be overwhelming.  It took him a while to collect himself but, with some advice and encouragement from a member of staff on the ground, he took a first step and then another and then in no time he was across to the next platform.  That experience, however, meant that once he was back on the ground, he decided he was staying there.  He was done.  So were his 12 year old brother and grandfather.  My oldest son decided he wanted to complete the course in its entirety, however, which meant one final set of challenges.  Since he had to be accompanied by an adult, that meant his father had to complete it too.  This included what my husband declared was the scariest part of the course: a just-too-long drop off of a platform to swing across onto a net.  Once they ziplined back across the lake, they too were done. 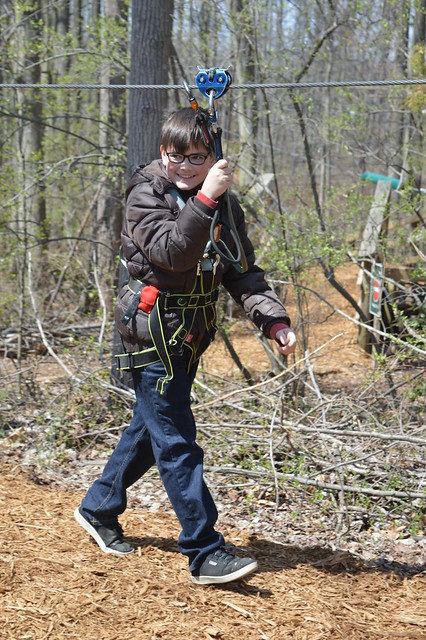 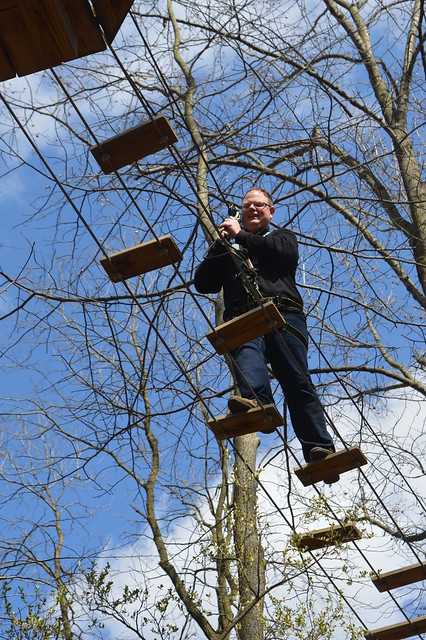 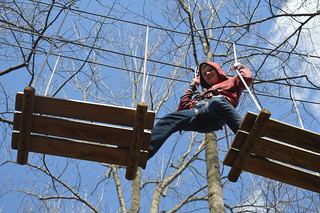 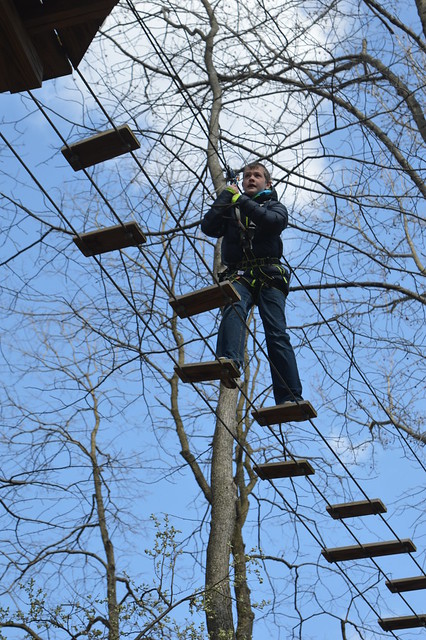 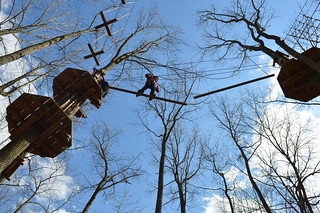 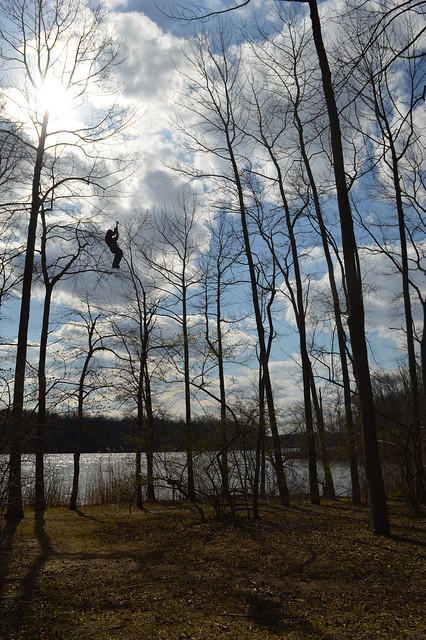 Every member of Team Pict had challenged themselves and felt a sense of accomplishment.  Just maybe even my mother-in-law and I get to include ourselves in that since we overcame our anxiety enough to spectate and offer encouragement.  Everyone was hungry after hours spent in low temperatures in the woods, especially those who had been burning calories swinging here and there, so it was time to eat.  The birthday boy wanted to have pizza for dinner so we headed to Anthony’s Coal Fired Pizza and had some delicious food.  Once we were home, he had his special birthday dessert, a platter of cannolis, one of his favourite things. 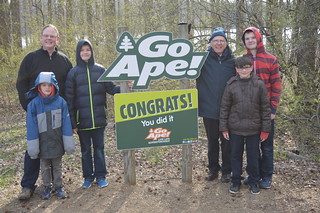 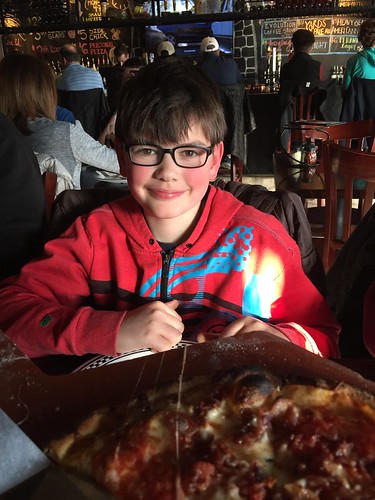 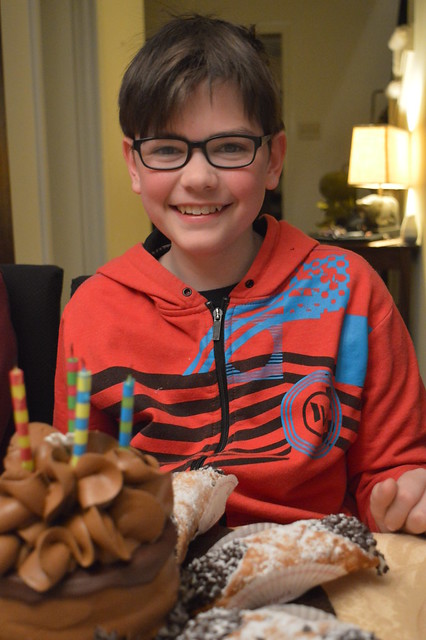