Waking early, we strolled across the street and popped into the Moonstruck Diner for breakfast.  The whole place had the feel of a retro diner but with modern decorative flourishes such as tables covered in petrol iridescent mosaic tiles.  The service was great, the menu was good and the prices were pretty fair by Manhattan standards.  I had a bowl of oatmeal with fresh fruit which was good fuel for the day which was useful because it was an absolutely freezing cold day, complete with flurries of snow and wind that whipped and chapped our skin and chilled us to our marrows.

We walked up through Times Square, already starting to bustle even that early in the morning.  We popped into the M&M store partly to show M and A the bizarreness of a store dedicated to just one single type of candy but also partly for some respite from the outdoor temperatures.  Three floors of nothing but M&M merchandise and a whole wall covered in tubes of different coloured chocolate sweeties, the shop is completely and utterly bonkers but impressively so.

Thawed out, we emerged back onto the streets and headed up into Central Park because you absolutely cannot visit New York City without a visit to Central Park.  We walked up through the centre of the park as far as Bethesda Terrace.  Unfortunately the fountain was not running, presumably because of the low temperatures but the angel was still appealing.  We then cut east past lots of sculptures.  We stopped to study the charming Alice in Wonderland statue just in time because a massive group of teenagers on a school trip then clambered all over it.  Then we popped out onto the Museum Mile section of Fifth Avenue.  Snow was falling by this point and it felt like we had to walk much further than a mile to reach our eventual destination: the Museum of the City of New York. 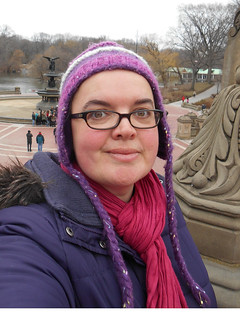 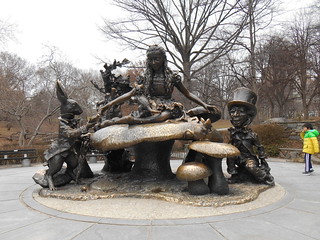 Tickets for the Museum had been part of the package that came with our bus tour tickets.  Given the temperatures, we would otherwise have chosen to visit a much closer museum.  We were welcomed by a lovely lady who explained what the current exhibitions were in enthusiastic detail when all we desperately wanted to know were where the restrooms were.  Having availed ourselves of the facilities, we then sought out a place to rest our weary legs and view a permanent exhibition, a short film named Timescapes.  Narrated by Stanley Tucci, it told the story of the city from pre-European settlement through to the present day.  A particularly successful element of the film was the use of maps to illustrate the expansion of the city and its development.  Another memorable element was the juxtaposition, across the three screens, of photos showing the lives of wealthy residents contrasted with those of the poorest residents.  Both of those aspects of the film drove the message of New York being a city of contrasts and of constant change.

The other exhibit we spent time in was a section devoted to the city’s history of social activism: abolitionists, suffragettes, gay rights activists, environmentalists, social justice campaigners, the Civil Rights movement , cycle safety and bang up to date with the controversy over the siting of the Park51 Islamic community centre.   All these examples of activism were represented in the exhibition space and illustrated with various artifacts, photographs, film footage and audio excerpts.  The slave irons were poignant but the section that I found most evocative was the revolving gallery of photographs by Jacob Riis depicting the city’s slums, impoverished residents and criminals.  The artifact I enjoyed most, however, was a plastic doll – a bit like Barbie’s boyfriend Ken – who was named “Gay Bob” and whose box read “Come out of the closet with Gay Bob”.  I thought the disarming wit of that item was fantastic and demonstrated a another approach to activism, differing from all the debating, arguing and rage.

The wind was blasting and the snow was whirling when we stepped back out onto Fifth Avenue so we were glad to be able to catch the tour bus to take us back down to Times Square.  The journey on the bus did nothing to warm us up but our plan was to stay out of the cold as much as possible by popping in and out of shops.  There were various items that M and A wanted to purchase so that was our mission for the afternoon.  Our first pit stop – after a quick bite to eat in a cafe – was Macy’s.  Macy’s bills itself as the world’s largest department store and it is certainly a bit of a warren inside, a maze of escalators and elevators and half floors.  The store was absolutely thronging too.  In addition to people who were there to shop, of which there were masses, there were also people who were visiting in order to apparently see all of the flowers that were on display.  Apparently Macy’s hold an annual floral exhibition and that event had apparently attracted a whole horde of people.  They were taking photos of flowers, standing around discussing botanical species and posing with the floral displays to have their photos taken.  Navigating the heaving crowds certainly helped warm us up.  I was determined to show A and M the wooden escalators in the store.  Most of the escalators have the original wooden sides but with modern metal steps but I really wanted them to see the flight of escalators that still have wooden treads.  That was my nerdy mission.  I was over the moon when I finally found them.  I suspect A and M were underwhelmed.  We wandered in and out of a few more stores so that my friends could buy all of the things they wanted to get and buy souvenirs to take back to Scotland and then it was time to wander back up into the theatre district to catch the bus for the night tour.

The night tour was the only bus ride we had with a female guide.  It would have been quite useful to have encountered her earlier in the trip as she was obsessed with toilets and was able to tell us which were the cleanest ladies’ loos in the midtown area.  As a female traveller, that type of intel is golden.  The three of us plus a lady from Florida elected to sit right at the back of the upper deck.  This was because the rear section of the perspex roof had been removed and we could get a better view and better photographs.  Any warmth we had accumulated from our jaunts in and out of shops immediately dissipated with the breeze whipping in through the back of the bus.  We also had to inhale exhaust fumes ever so often.  We all refused to budge, however, even though the seats were also too high for us which meant we all shuttled forwards any time the bus came to a jolting stop, which it did frequently.  We thought unimpaired views and better photographs made it worthwhile.  The tour took us past all the usual suspect sites but it also took us over the Manhattan Bridge onto Brooklyn – affording us a decent view of the Brooklyn Bridge – and then along the side of the East River so that we could see another view of downtown Manhattan before taking us back over the river to complete the circuit. 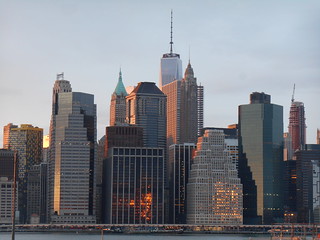 Temperatures had fallen to subzero (centigrade) while we were on our bus tour so we decided to just scurry back to home base which we did as quickly as possible but via a wine shop.  We chilled out in the living room of my hotel room, drinking wine, chatting and giggling until the wee small hours of Sunday morning because this trip was about reuniting with friends as well as exploring the city and that was our last evening together.