The first time we went to the Franklin Institute, back in March, we decided to take out an annual family membership.  We had only covered a few sections of the interactive museum on that trip so a return visit was definitely in order, even if we had not had the annual ticket.  It, therefore, made sense to take my parents there during their visit from Scotland.

The Franklin Institute recently opened a whole new area which is dedicated to the science of the brain.  It was, therefore, there that we started our visit.  The kids loved all of the interactive exhibits.  It’s a brilliant way to keep them engaged with things and to have them absorbing learning through osmosis.  It was diverting and absorbing for adults too and certainly I could have spent a lot longer in that area of the museum than I did but my pace was dictated by that of my children.  They learned about neurons and pathways, got to see brains at different ages and saw scans of brains.  There was even a docent with plasticised animal and human brains teaching the kids how to compare brains.  My 7 year old loved seeing the horse brain (which he was permitted to touch) since he is a massive fan of horses.  He was glad to learn that a horse is much “brainer” than a cow.  He also showed them how to compare a healthy brain with that of someone with Alzheimer’s which was quite arresting.  They also enjoyed sections about how the brain processes the senses with things like optical illusions and a room that induces motion sickness.  Their favourite section, however, was a dark room filled with a funky climbing frame to illustrate how neurons travel around the brain.  They loved it.  They could have stayed in that room for hours. 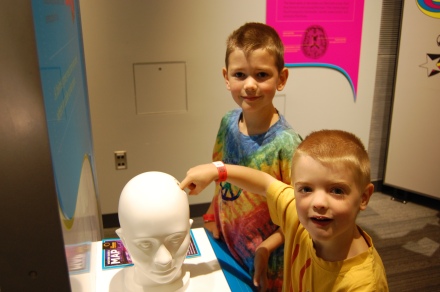 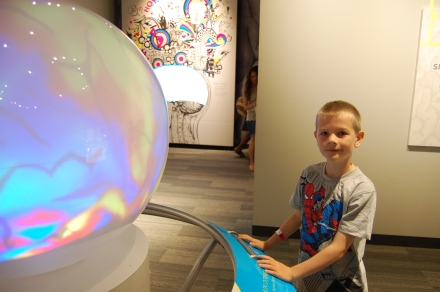 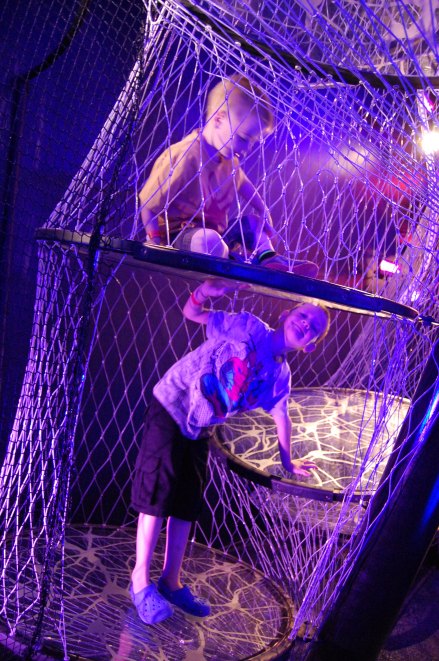 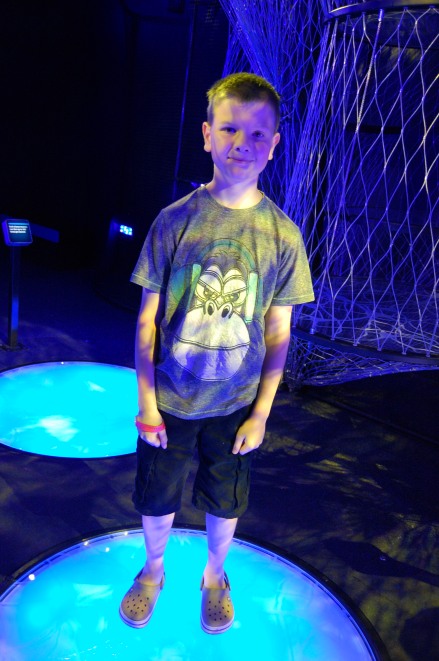 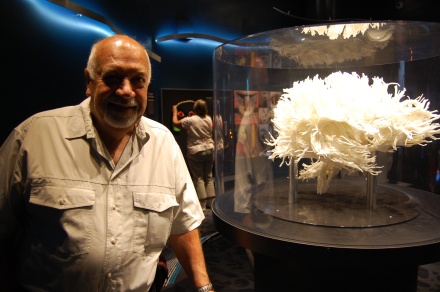 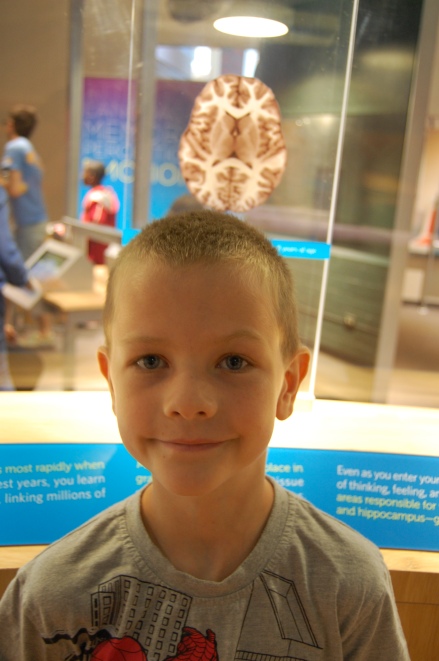 We then decided to go and see an Imax show.  My children have never been to see an Imax movie before so we thought this would be a fun way of them experiencing such a large scale projection.  We opted to see a documentary about Great White Sharks since the kids and I are fascinated by sharks.  We have the Ocearch Global Shark Tracker app on my phone and like to check in and follow where the sharks are.  My 7 year old has particular favourites in April, Lydia and Katherine.  The Imax show was brilliant.  The focus was on conservation efforts and trying to educate people about sharks  – and Great Whites in particular – in order to eliminate the fear that has led to their persecution and endangerment.  It was quite breathtaking to see the sharks being projected on that scale.  I admit, however, that I had to close my eyes during some of the seascape bits as it was a bit boak-inducing.

Immediately after that, my oldest had a shot on the Skybike.  This is a bike suspended on a wire in the ceiling of the Franklin Institute.  It makes my knees turn to jelly just thinking about it but he doesn’t have vertigo and was eager to have a go.  There was too long a queue during our last visit there so this time he grabbed the opportunity to have a turn.  This was much to the consternation of his little brothers who were all massively miffed that they did not meet the height requirements. 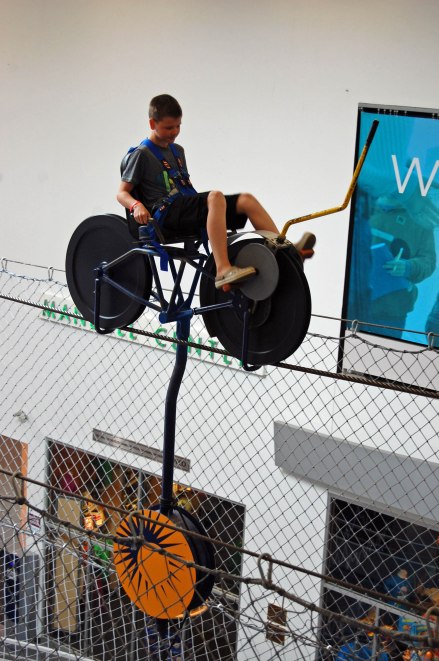 We then asked the boys to nominate sections of the Institute they had visited before but would like to return to and show their grandparents.  I was surprised when they elected to revisit the section dedicated to sports science.  My kids are all pretty active but none of them are sporty either in terms of playing or spectating.  Clearly the interactive nature of the exhibits won out over the subject matter.  Unfortunately the race car exhibit was out of order and some boys were hogging the area that measured the speed of a pitched baseball.  Nevertheless my kids had a blast with the wheelchair racing, climbing wall, penalty shoot out and surf board. 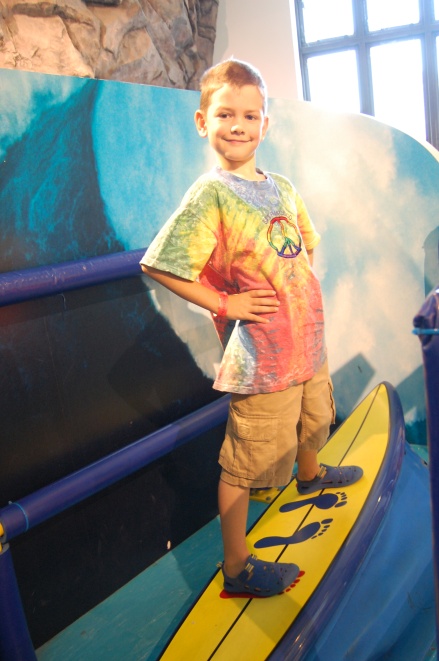 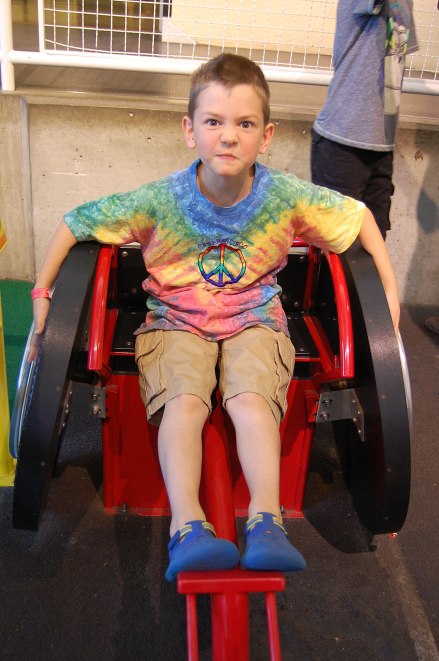 A hop, skip and jump then brought us into Isaac’s Attic where they had fun with all sorts of interactive experiments involving gravity, motion and light.  My 8 year old especially enjoyed the sections involving light – coloured lights changing the appearance of a printed art image and spinning a block to create different shapes.  They also loved an experiment that involves shuttling a ball back and forth using the force created by pulling down on a rope and releasing it. 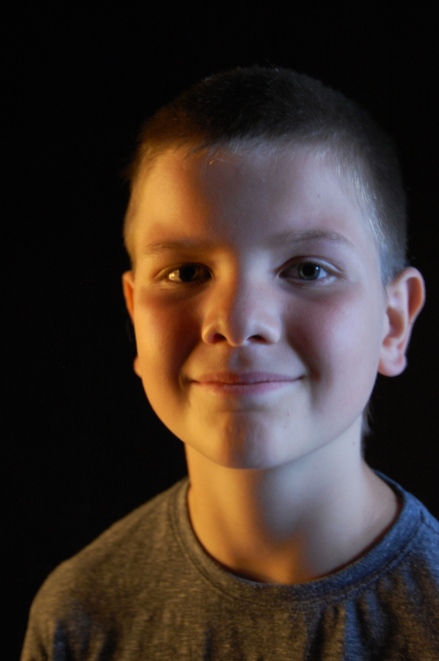 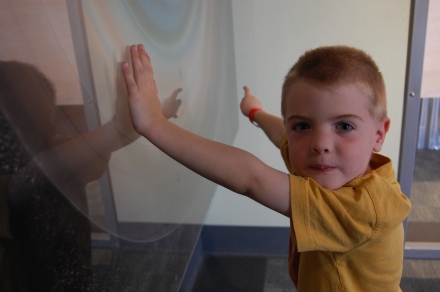 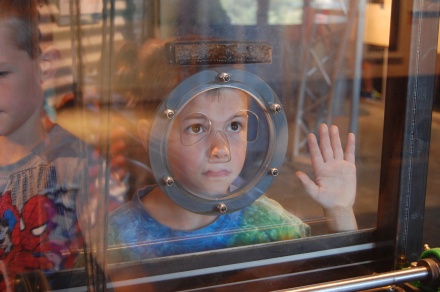 A favourite section is the one focused on the human heart.  My younger three kids raced around the giant heart umpteen times and then crawled and jumped around inside blood vessels.  The 11 and 7 year olds were also fascinated by the rotating display of heart of various sizes, from a minuscule canary heart to a massive whale heart.  We then finished with the gallery next to it which is all about geophysics.  The boys had fun assisting their Grandad with building structures that would survive an earthquake.  They also enjoyed crawling through yet more tunnels and playing a space invaders style game about greenhouse gases and global warming. 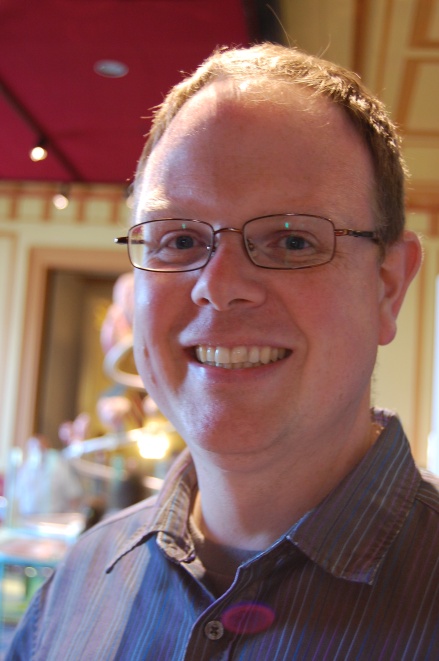 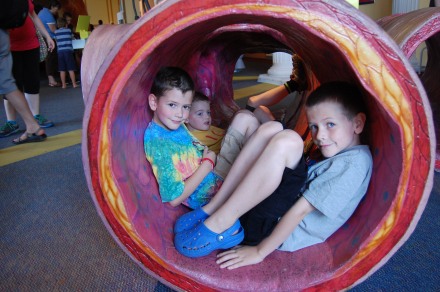 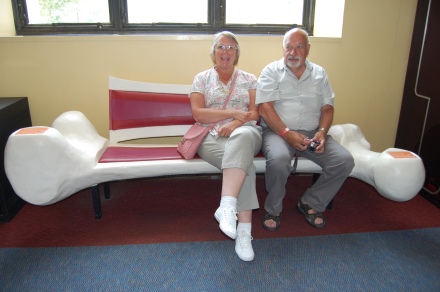 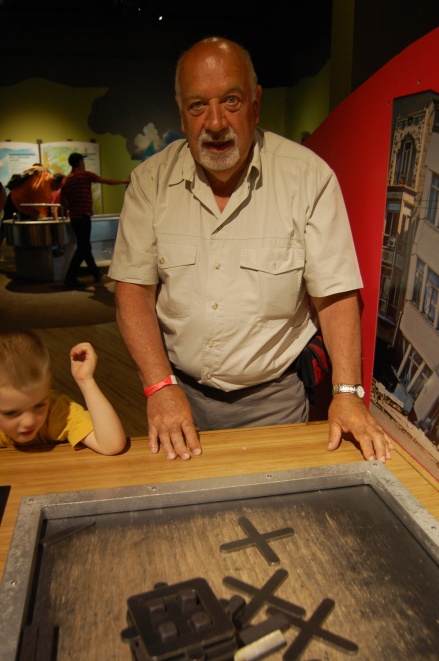 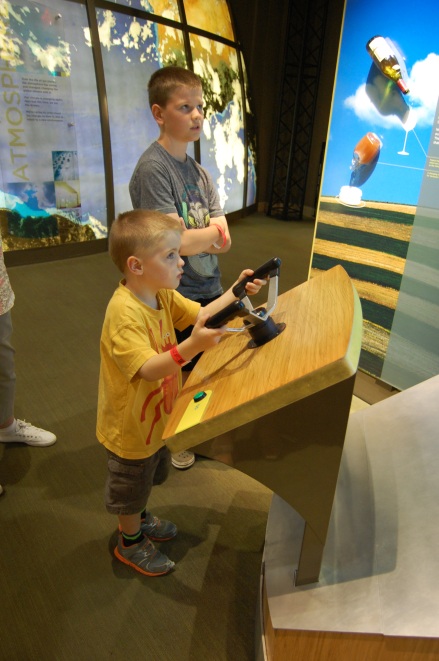 We had a brilliant time and will definitely go back again.  And again.  And again.  I think my kids would go back today just to play in the brain section.  My parents also thoroughly enjoyed the Franklin Institute and were impressed by all the interactive exhibits.  We highly recommend.