There were two lessons last week for Life Book, one taken by Whitney Freya and one by Samie Harding.  There was absolutely no way I was going to find time to tackle two different lessons.  I thought I would choose to work on the one that appealed most to me but, in actual fact, neither really chimed with me enough to stand out.  One was abstract and one was very “art therapy” in its approach and neither of those things really inspires my creativity.  I almost decided not to work on Life Book for the second week in a row but then I had an idea: I could combine the lessons.  I could use some of the approaches from the abstract lesson to create a background and could use the concept of a totem animal from the other lesson as a jumping off point for the subject matter.  Of course, being me, I had to put my own twist on things and – as such – I turned my bear into a silhouette contain a skeleton.  You wouldn’t know it to look at it, but I did have a quick google to have a photo reference for the bear’s skull.  I actually had a lot of fun creating this painting so I am glad I found the mojo and the time to actually work on Life Book after all. 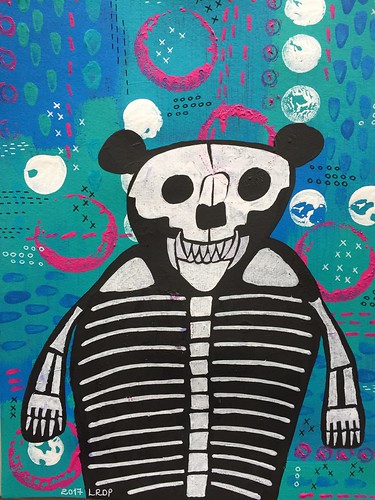 Last week’s Life Book lesson was taken by Effy Wild.  Her lesson had a more art therapy approach to it than most Life Book lessons but, as always, it was easy to focus simply on the creative techniques and adapt it to be less personal and emotional.  I also had to be pragmatic about time so whereas the lesson demonstrated two layers, a flap that moved across a lower layer, I conflated the two layers into one.  I like putting my own spin on lessons so I experienced no dilemma in adapting the lesson to such a great extent.  The idea had been to have a lower layer that included a lot of handwriting and a concept represented visually by a skeleton and the flap that covered this would be a painting of a fully human figure, the flesh over the bones.  In conflating the two layers, my figure became a mixture of human and skeleton.  I, therefore, coincidentally worked on two skull faces in one week.

I decided to try out a red and turquoise colour scheme with a bit of grungy magenta over the black background and some metallic blue in the circle.  I rather like the combination so can see me deploying that palette again in future. 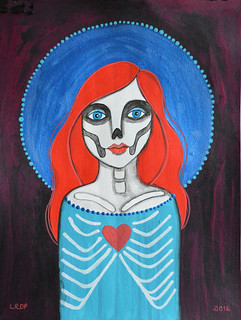