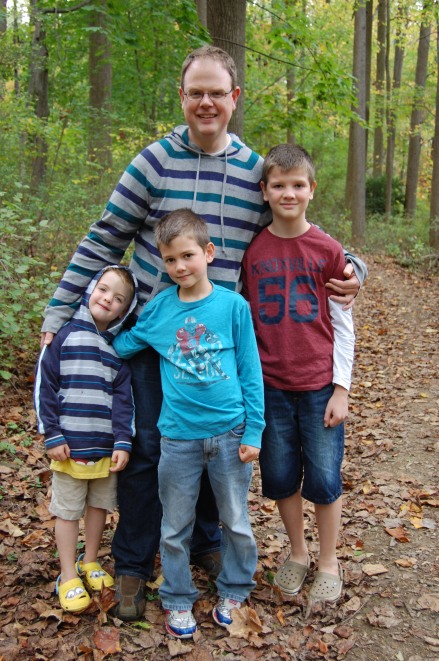 Yesterday was my first ever Columbus Day.  Until I saw the kids were off school, I had forgotten Columbus Day even existed.  It’s not really up there in the pantheon of great American holidays and, quite frankly, nor should it be.  A couple of American cities have actually renamed the holiday which has reignited the debate about whether there ought to even be a Columbus Day – and some states choose to not observe it as a federal holiday anyway.  Not only was Christopher Columbus not actually the first European to “discover” North America – and there’s no Leif Erikson Day – but he discovered it as a blunder.  What makes Columbus Day particularly objectionable, of course, is that it is named in celebration of a voyage that led to the enslavement and genocide of the indigenous peoples of the continent.  Even my 7 year old can tell you that the Columbian Exchange meant fruit, vegetables, animals being introduced to Europe whereas Europe gave North America horses and disease – the latter, of course, also assisting in the eradication of the native populations.  Fair swap?  Opportunity for some was degradation and destruction for others.  As an outsider and newcomer to Columbus Day, it does strike me as very peculiar indeed that Columbus is still considered worthy of celebration (even if that is a low key celebration that means little more than kids getting a day off school).  It seems to me to be at least equally as distasteful as the word Empire still being included in the honours the Queen hands out.  I am not someone who supports whitewashing history.  I think the ills and horrors of the past need to be accepted and embraced and hopefully learned from.  I am sure, however, that right-minded people would think it inappropriate to have a national holiday celebrating slavery and that’s in the same moral ball park.  Columbus Day really ought to be replaced with a holiday that merits celebration.  There is a movement to replace it with a celebration of the indigenous cultures of North America.  That would certainly be a way to further redress the “white” imbalance of national holidays but the “male” imbalance could start to be righted by having a national day that celebrates the accomplishments of and contributions made by American women to the world.

Anyway, that’s my rant about Columbus Day over and out.  As mentioned, all it meant for us was that the kids had a day off school (yet another day – Autumn seems to be liberally peppered with holidays) and – since all of his colleagues had taken the day off – Mr Pict decided to take the day off too.  We decided to go for a bit of a nature ramble.  A neighbour had told my kids that she had seen some skunks in some local woodland when she was walking her dogs.  Nobody in their right minds goes in search of skunks.  My kids wanted to go in search of skunks.  So a skunk-searching we went.  You will note in the photographs to follow that we were minus one child.  He had not been abducted by a sasquatch or indeed attacked by skunks.  Our 9 year old was at a sleepover at a friend’s house and thus missed this first opportunity to go in pursuit of skunks.  Here’s the thing: we did not encounter skunks.  In fact, we encountered less wildlife on our wander through the woods than we can find in ten seconds spent in our garden.  That may or may not have something to do with the fact that my kids go nowhere quietly. 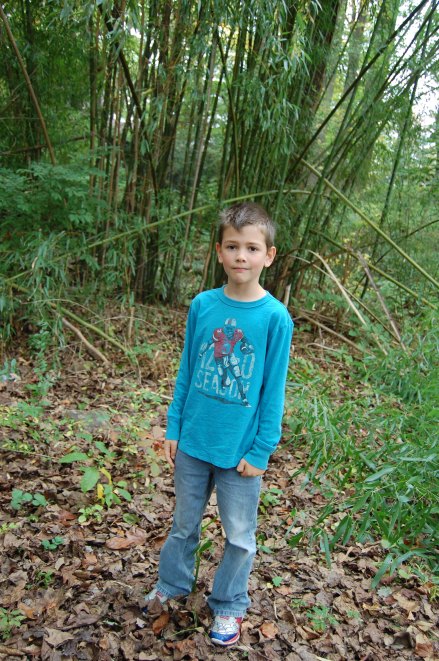 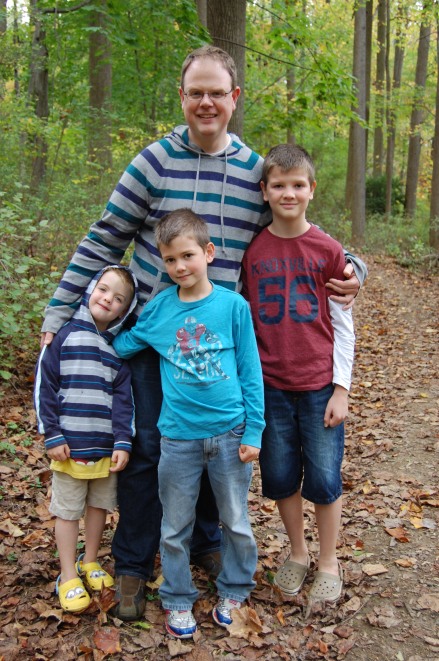 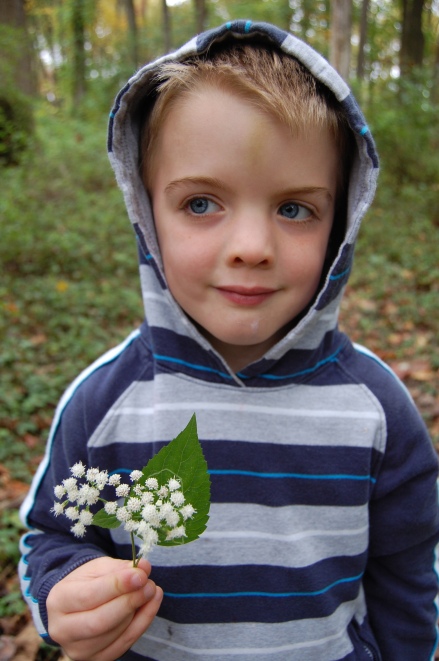 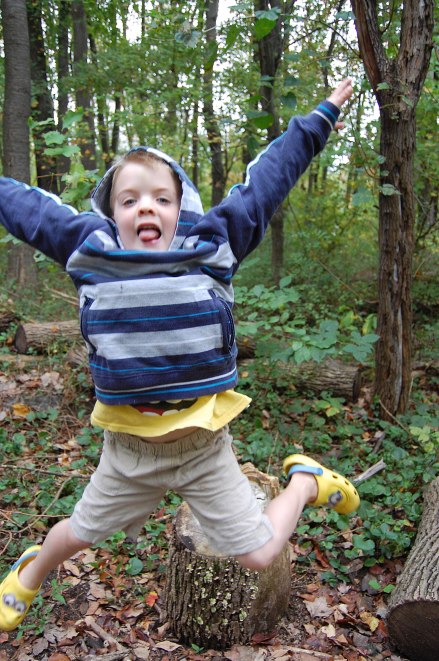 The end of the woodland trail brought us out at a local playground.  There was a black walnut growing which was depositing its fruits all over the place.  Black walnuts look a bit like smooth horse chestnuts, if that makes sense.  The green outer casing smells like lime and inside there is black mush that makes me think of charcoal.  The interior was, in fact, used as a pigment for drawing and dying through the centuries.  The black walnut also features in my husband’s family history in that his Mennonite ancestors used it , when migrating from Pennsylvania to New York and Canada, to determine where best to settle and establish their farms since the presence of the black walnut was an indicator of fertile and well-irrigated land. 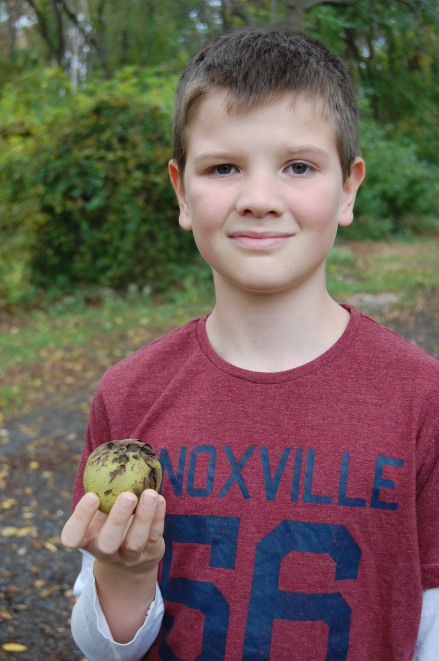 While his little brothers played on the play equipment, my oldest son and I decided to employ black walnuts as balls.  There are no photos of us juggling with them because a) I couldn’t take photos when two hands were being used for juggline and b) neither of us remotely has any skill with juggling.  We then used them for a counting, clapping, throwing game and for practising throwing and catching one-handed (and not with the dominant hand).  Who needs toys, right? 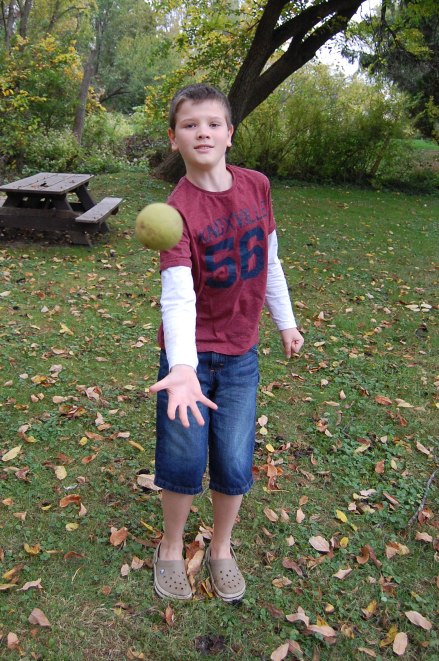 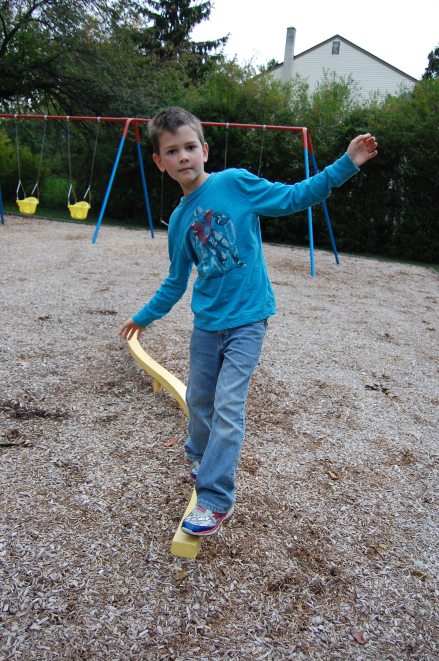 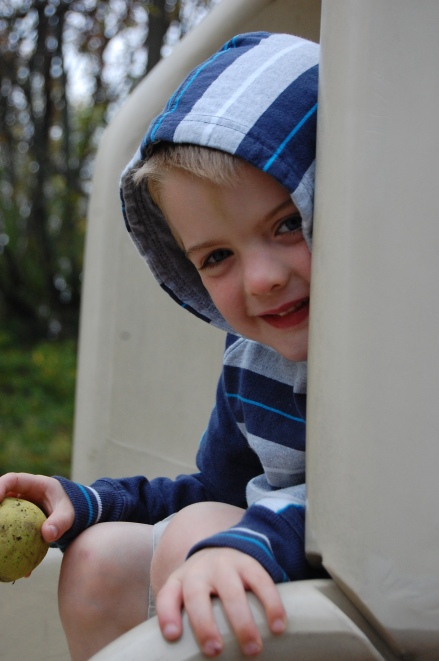 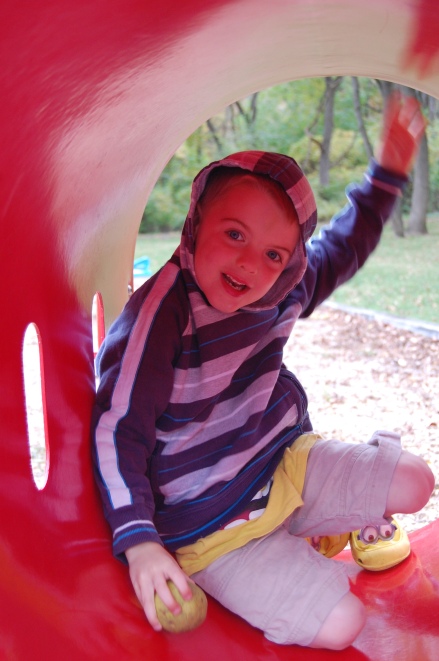 Once home, we decorated the house for Halloween and then my husband made a delicious chicken pot pie for dinner.  That then was our wholesome, quality family time, marking of our first Columbus Day.  No genocide involved.  And who knows, maybe our next Columbus Day will actually be Indigenous People Day or American Women’s Day.