The two prompts for the second week of the Documented Life Project were to use gesso and a quotation from Mary Shelley: “The beginning is always today.”  I decided to combine the two prompts into one page just to save time.  What was immense fun this week was that my 7 year old and I worked on our pages side by side using the same techniques.

We decided to use the gesso to create a background layer.  Instead of just using it as a primer, we mixed the gesso with two or three colours of acrylic paint which created a really textural background. Once that layer was dry, we used acrylic paint in contrasting colours dabbed through stencils to create another layer.  I then added some circles and dots to my page by stamping objects into white acrylic.  My son opted not to do so and I think his was the right choice as my background ended up a bit too busy.  We then collaged using origami paper: I constructed birds and my son made bats, which turned out really cute.  Although ‘Frankenstein’ is one of my favourite novels, I decided against using the quotation from Mary Shelley.  Instead I used one by George Bernard Shaw that I liked because it seemed apt given that I am at the beginning of a year of trying new creative things: “Imagination is the beginning of creation.”  I stamped the words on.  My 7 year old decided to stamp too but instead of a quotation about beginnings he chose to stamp what he thought about his bats. 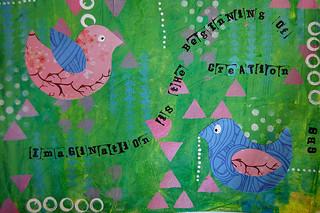 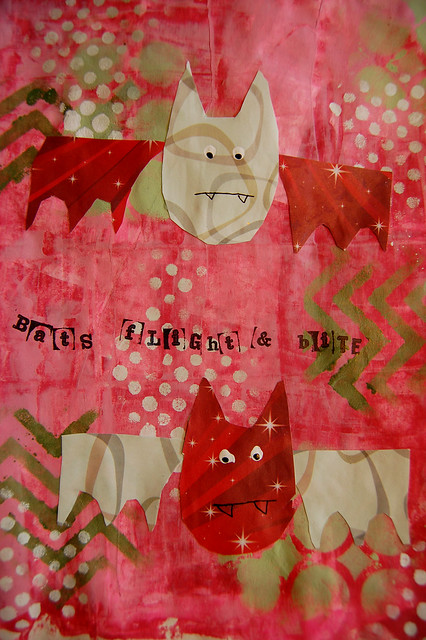 Didn’t my 7 year old do a fantastic job?  I far prefer his page to my own and so do his brothers.  His chosen colour scheme turned out to be far more harmonious and pleasing than mine and his bats are just adorable.