Last week’s Art Journal Adventure prompt was “music”.  I love music and as a family we listen to music a lot.  I listen to music when I am doing household chores as a distraction from the boredom and monotony and I also listen to music when I am sitting at my art table creating.  The struggle, therefore, was trying to condense such a wide ranging theme into an art journal page.  Some weeks I want for inspiration and other weeks I have so many ideas bouncing around in my head that I simply cannot focus and determine which would be worth distilling into a visual page.  I decided, therefore, that I would base my art journal page on the very next piece of music I heard.  That so happened to be my two youngest sons singing ‘Blackbird’ by The Beatles.

‘Blackbird’ was the perfect selection because there was automatically an obvious and strong visual element for the page – the blackbird itself.  I created a neutral, muted background by scraping paint across the page using an old hotel key card.  Then I painted the black body of the bird.  Then my week got massively busy and I did not add to the page for almost an entire week.  Happily, on Sunday I had my monthly meet up with some other local art journallers.  That then gave me a block of time on which to work on this page (and another) but it also meant I was limited to using portable art materials.  The rest of the page, therefore, was created using Posca paint pens.  I wish I had used a ruler to organise the text on the page.  How many years now have I stated that I will work on my typography?  Some day. 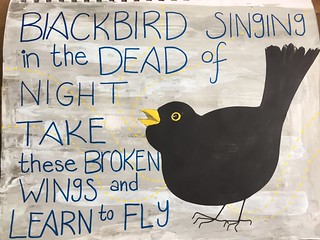 This week’s Art Journal Adventure prompt was “Here comes the sun”.  I wish!  This Winter has been so grey and dull that I am longing for sunshine.  The intention of the prompt was to create an art journal page featuring the sun.  However, as a Beatles fan, I just had the song lyrics playing over and over in my head and I decided to go down that path and create an illustration of The Beatles in my art journal.  My 9 year old is a huge Beatles fan so I let him choose the “era” that I would depict.  He chose the Sergeant Pepper era and I am glad he did as it made for a brightly coloured page.  I drew the illustration with fountain pen and added colour with watercolour.  It was fun reducing Ringo, John, Paul, and George to simplified shapes and trying to capture something of their looks and personalities.  I must admit I am rather pleased with how this drawing turned out. 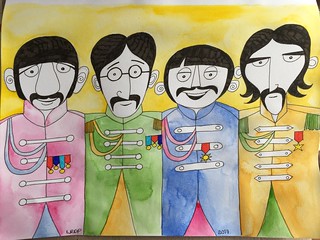 Yesterday evening the Pict family attended another free music concert, organised by our township.  The performers this time were a Beatles review group so this concert held more innate appeal for all members of the family than the Bluegrass concert had.  The group put together an eclectic set of Beatles songs, progressing in roughly chronological order.  I am not such a big fan of the early Beatles stuff as my favourite Beatles albums are Revolver, Abbey Road and Rubber Soul in that order; however, banging out a few of the early tunes certainly helped generate a fun, relaxing mood and had everyone singing along from the get-go – or maybe just Mr Pict and I were singing along.  The instrumentation and vocal harmonies were spot on and I would venture to say that Fake Paul’s voice has held up over the decades better than that of authentic Macca.  They didn’t just opt for obvious choices of songs either, even performing the run-on-song section of Abbey Road, which Mr Pict and I loved.  The boys, who have been exposed to the Fab Four since the womb, thoroughly enjoyed the music and were tapping and bopping along.  I think their only disappointment was that there was no performance of ‘Yellow Submarine’.  It’s great that our township organises events like these.  It’s not just a wonderful way to wile away a summer evening but it also provides us with the opportunity to expose our children to live music.

We had gone prepared with seats and blankets but in the end we managed to snag a picnic table towards the back of the field which was perfect as it acted as a corral for the kids.  Mr Pict had gone on a dash to Wawa to pick up some subs and drinks for us to have a picnic dinner so we munched our food while enjoying the music, atmosphere and warm summer sun.  Grub consumed, the boys then started drawing.  They often like to draw while listening to music so I had come prepared with paper and pens (lesson learned from my too slapdash approach at the Bluegrass concert).  Inspired by the music, our 7 year old drew The Beatles and then Elvis; the youngest drew the Empire State Building and some funky slugs; the oldest drew a comic strip; and the 8 year old drew scenes from Star Wars movies.  Well at least the music inspired their creativity!  I think my boys might be taking after me in their love of drawing.