Our original plan had been to let our Franklin Institute annual membership expire and then take up an annual membership to something else.  However, not only did we get a great deal on a renewal of our membership but we have found that we enjoy popping into the Franklin Institute so much that it was worth continuing our membership.  The place is basically an indoor playground for our brood which has been a particularly worthwhile investment this winter will all the cold, ice and snow.

This past weekend, we had out first non-family-member house guests.  They only just qualify as non-family since Nacho is Mr Pict’s oldest friend (in terms of longevity, not age) and is pretty much part of the family whether he likes it or not and that means his partner gets co-opted too.  Looking for something that would occupy the kids while also engaging the adults, the Franklin Institute was the obvious choice.  Plus they are hosting a travelling exhibition all about lego named The Art of the Brick.  It was a must-see for we lego fanatics.  We were not disappointed by the exhibition.

The first section of the exhibition was famous works of art reproduced using nothing but lego bricks.  Every single painting or sculpture was instantly recognisable despite the unusual medium which not only testifies to the flexibility of those little plastic blocks but also to the power of certain works of art to become iconic.  Our oldest son had wondered if there would be the entire Bayeux tapestry made out of lego, thinking back to our visit to Bayeux a few years ago, and lo and behold there was a small section of the tapestry.  There was also the Mona Lisa, a Rembrandt self-portrait in his distinctive murky, shadowy tones, the Girl with the Pearl Earring, her earring standing proud from the rest of the lego, and the Vetruvian Man, almost monochrome yet still immediately identifiable.  There were particular highlights among the many reproductions of two dimensional works.  The colours of the bricks in The Scream were spectacular and the screaming figure had been rendered as a sculpture emerging from the landscape.  My kids loved re-enacting the Scream.  The textural paint of Van Gogh’s Starry Night had been recreated through use of lots of little studs swirling across the sky.  The graphic quality of Hokusai’s Great Wave was perfect for the geometric lego blocks.  American Gothic had been turned into a sculpture.  My personal favourite, however, was the lego version of Klimt’s Kiss which had been turned into a full size three dimensional sculpture.  The lego bricks were used to create all the luscious pattern in the figure’s clothing and I was impressed by the way the curves had been sculpted out of a material so blocky. 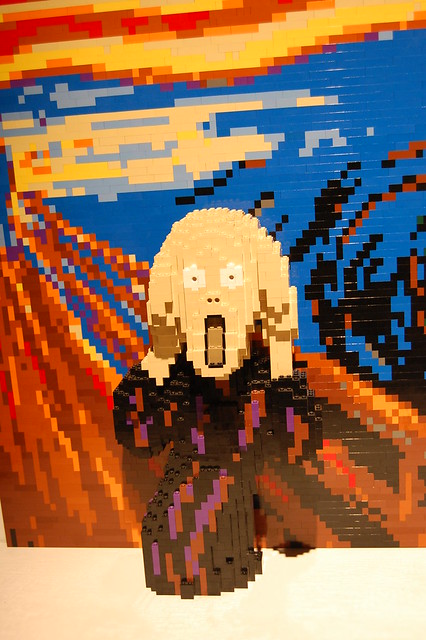 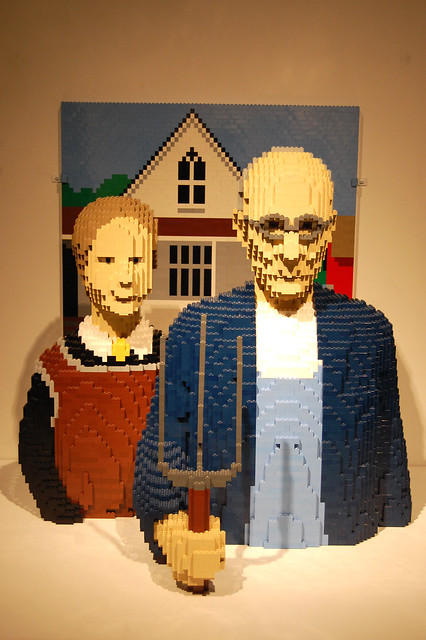 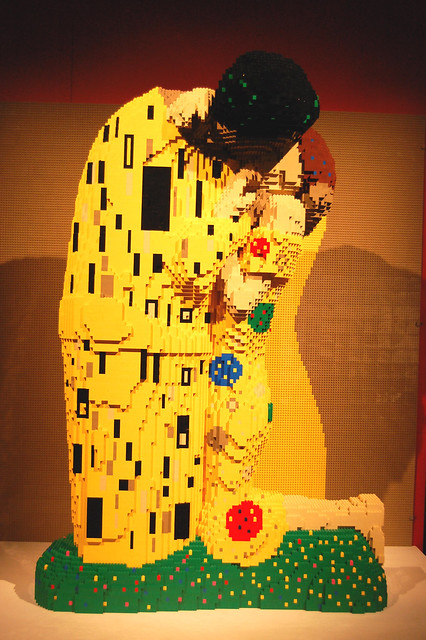 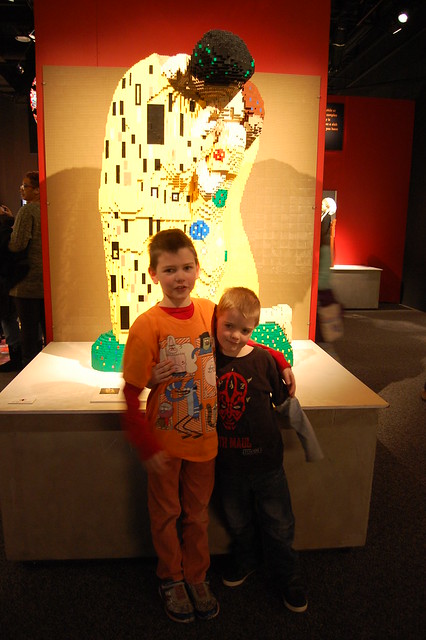 The second section was devoted to famous sculptures.  There was the beautiful bust of Nefertiti, Michelangelo’s David, complete with pert brick butt, a Degas ballerina, the Willendorf Venus, a Chinese Imperial Archer and even a massive Moai.  I know how long it takes my kids and I to build a lego set so we were staggered by how long it must have taken the artist – Nathan Sawaya – to build these full size sculptures, especially without instructions.

The final section was a showcase for Sawaya’s original works of art.  They were amazing, not just in terms of the engineering involved but also the imagination and creativity.  Many were human figures that seemed to suggest some sort of emotional state.  There was a kneeling figure whose hands had broken down into individual bricks which represented the nightmare of the artist no longer having the use of his hands.  There was a figure swimming, half submerged.  There was one peeling off its blue brick skin to reveal a grimacing skull beneath the face.  Two plump figures walking hand in hand.  A gigantic red head.  A hunched green figure emerging from a wall.  There were massive colourful skulls, a huge dinosaur skeleton, a series of props built from lego which featured in an accompanying gallery of photographs.  Finally – as a nod to this particular locale on the exhibition’s tour – there was a liberty bell with the crack created out of brightly coloured bricks. 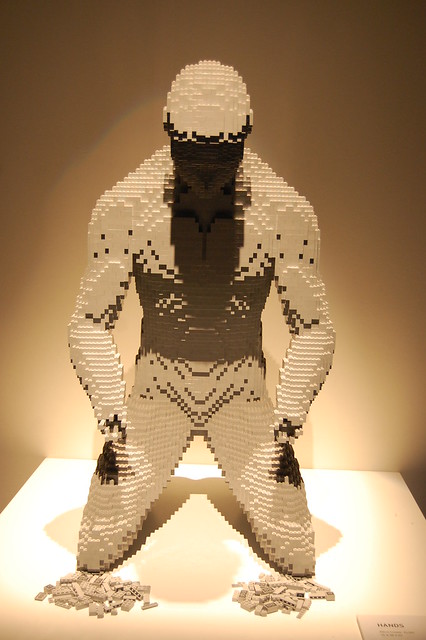 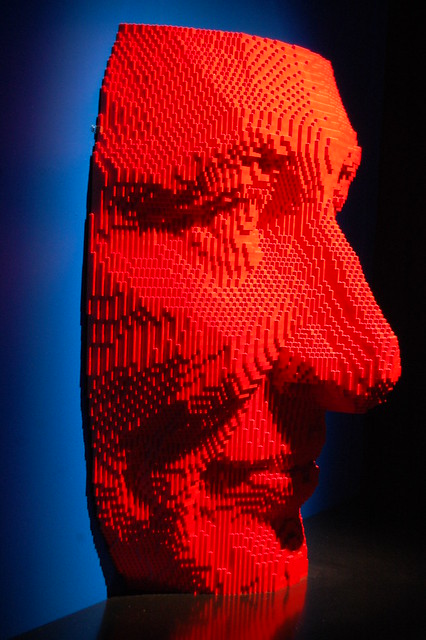 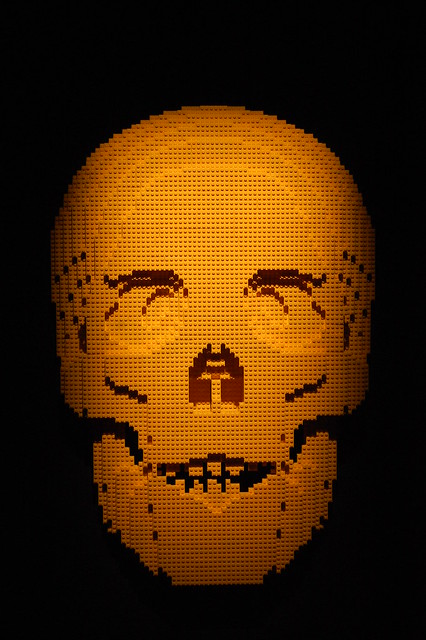 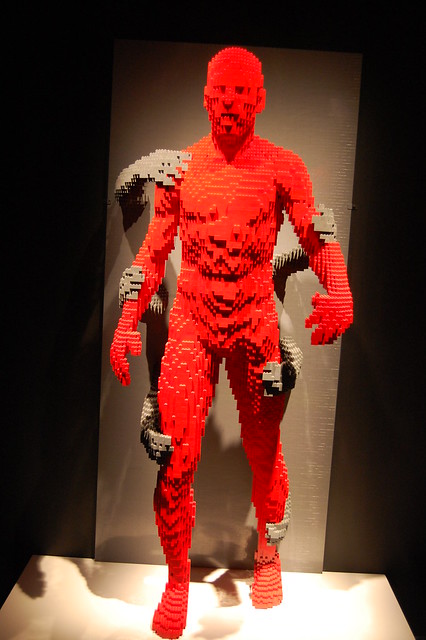 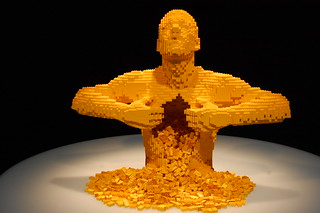 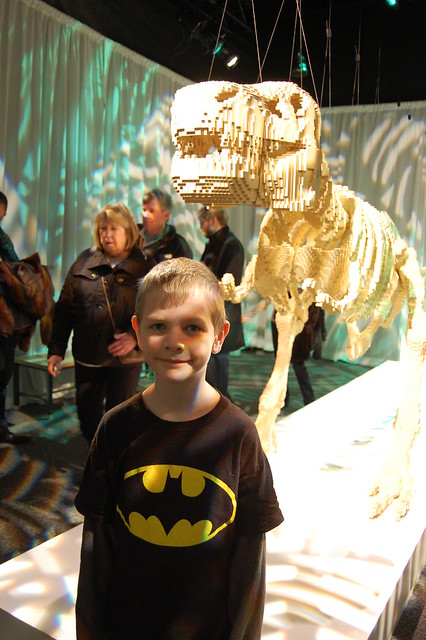 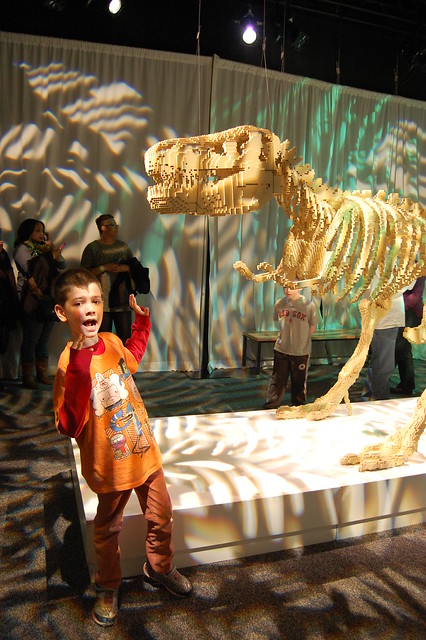 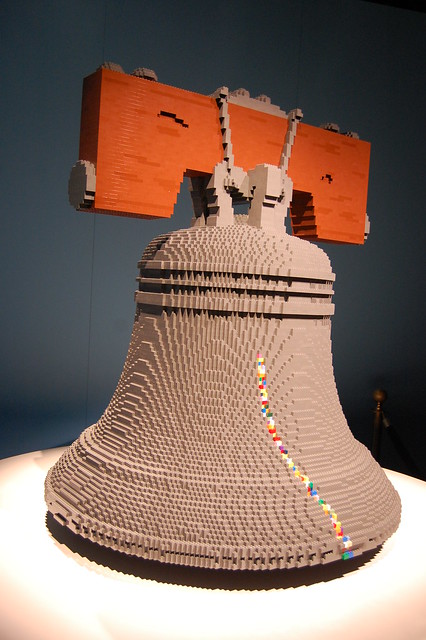 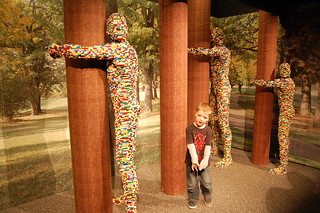 After the exhibition, we then had a jaunt around the rest of the museum visiting the boys’ favourite haunts, including sitting in the aeroplane cockpit, making circuits in the electricity section, several runs around the heart, a pedal on the sky bike, surfing and wall climbing in the sports section and a scramble around in the brain climbing frame.  Another great day out and very good value for money.  We definitely feel confident in our decision to renew our Franklin Institute membership. 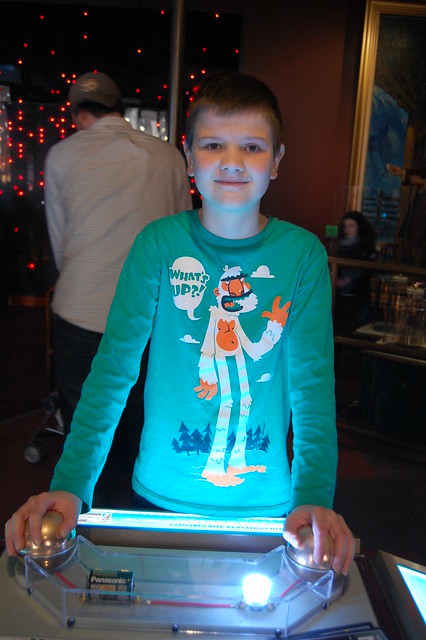