While the youngest two Pictlings were vacationing with their grandparents, Mr Pict and I took (dragged) the oldest two into Philadelphia to visit the Barnes Foundation.  Our 11 year old and I love art and love to visit art galleries whereas Mr Pict and the 14 year old tolerate art galleries.  Somehow we all ended up united in not much enjoying our experience of the Barnes Foundation. 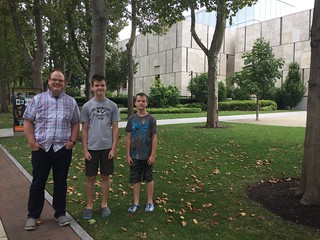 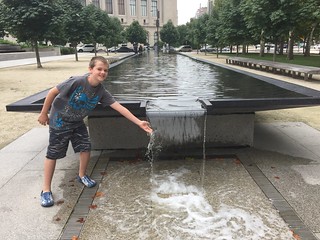 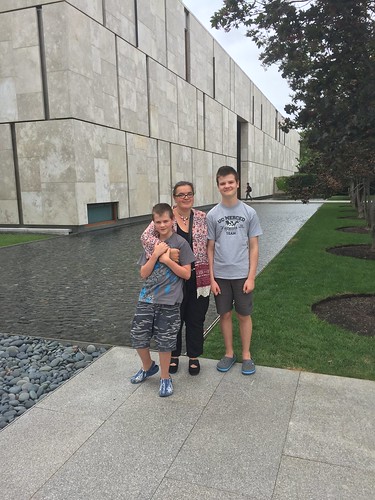 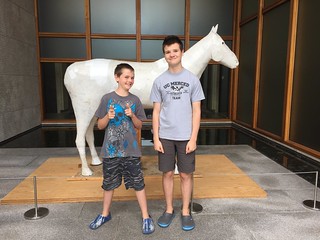 The Barnes Foundation is essentially the large art collection of one particular individual, a pharmaceutical tycoon named Albert Barnes.  He wanted his collection to be educational so opened it to students and gradually, over the decades and through much controversy, it became open to the public.  Numbers entering the galleries are limited so when we arrived we expected to be given a timed ticket but instead we were told we could go right on in.  We were simply lucky, however, as when we left there was a long line of people waiting to gain admission.  I actually like the idea of limiting numbers as I have had dire experiences in overcrowded art museums, including the Louvre. 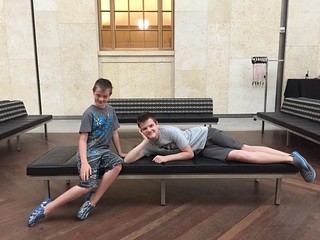 Barnes, it appears, was a bit of a control freak.  I get that because I am one too. It would seem that a condition of his collection being available for public access was that the items be displayed exactly as he stipulated.  Therefore, each room of the gallery is presented exactly as he wanted – with decorative iron work being displayed alongside the paintings and drawings – which means it is organised according to his taste rather than any sort of curation based on art history or chronology or theme.  I found this frustrating.  Usually I engage my children in art galleries by having them draw studies of what they are viewing.  They really enjoy doing that.  Alas, the Barnes Foundation does not permit drawing.  Therefore, desperately trying to engage my children in what they were seeing, I was trying to discuss the art work with them, drawing comparisons, looking for the stylistic flourishes and techniques that made it easy to identify which artist’s work we were looking at.  This was made incredibly difficult by the somewhat haphazard way the paintings were organised.  They were also, in my opinion, all hung too closely together so that no piece had breathing room.  The paintings were not labelled – since there was no wall space between them for a label – but there were handy diagrammatic maps available in each room.  We saw a plethora of Renoirs, Cezannes, and Matisses.  There were also works by Modigliani, Picasso, Degas, Seurat and Van Gogh.  All of these were artists familiar to the children from me teaching them History of Art a couple of summers ago.  They were also introduced to less familiar artists such as Chaim Soutine, Charles Demuth, and the sculptures of Lipchitz.

Impressive as the collection was for its content, our whole experience at the Barnes was of feeling frustrated, stressed, and hassled.  This was made a whole lot worse by overly officious guides and docents.  Each room had a line built into the wooden floor.  This line designated a point that bodies were not permitted to cross.  Of course, we had to step across the line in order to pass through a doorway.  The occasional portal contained a work of art but heaven forfend if one should pause between rooms to catch a glimpse of the art work in question because, of course, then we were between lines.  At one point, my 11 year old raised his hand to gesture slightly towards a painting we were discussing and a docent leapt up to push his hand back behind the line as if he was about to poke the painting.  I found it off putting but to my sons it crippled any enjoyment they were getting from looking at work by prominent artists.  Furthermore, when I wanted to ascend the staircase to the second floor, a guide who was conducting a tour and who had positioned her group at the bottom of the stairs, was incredibly rude to me for daring to interrupt her talk by walking between her and her group in order to access the stairs.  I was fizzing with frustration at that juncture.  We consequently made quick work of the second floor since we were becoming increasingly annoyed with the entire experience.  What kept us entertained was my 11 year old’s idea that we should pick a painting and make up a narrative about it, the more outlandish the better.  We were all thoroughly amused.  Of course, we drew tuts from a po-faced docent.  Time to depart.

Before we left, however, we popped into a small gallery space for a temporary exhibit.  We almost did not go in because the kids were so hacked off by that point.  We were all glad that we did, however.  The exhibition was about a series of works by an artist named Mohamed Bourouissa inspired by time he spent with a community of horse riders in North Philadelphia.  I had no idea there were people riding horses in Philly for a start but I also found the works themselves to be fascinating and thought-provoking, sculptures made out of old car parts with photographs printed on to them.  It was a really positive end to what had otherwise been a disappointing visit to the Barnes Foundation. 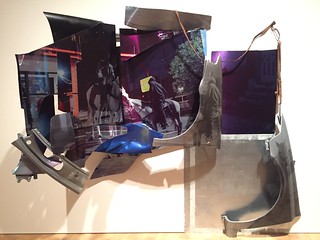 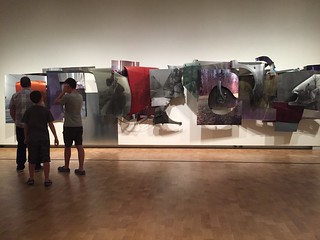 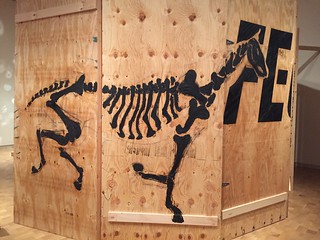