We have had an incredibly busy couple of months so this is going to be a bit of a “catch up” blog post that jumps from subject to subject.

My oldest son moved to Rochester, New York, in the middle of August in order to attend college and then the other boys went back to school on 1 September. This was their first time attending in-person school since March 2020. After 18 months of virtual learning and only seeing teachers through screens, they were very much looking forward to a more normal school year. However, not long after they got home on that first day, our community was hit by a tornado. Some neighbourhoods were devastated and community buildings, including the High School, sustained damage. My two High School aged sons, therefore, had to pivot back to a few weeks of virtual school again. As deflating as that setback was, we were very thankful to have not personally endured any lasting damage to our property.

In October, my in-laws came to visit. Having not seen their grandsons for almost two years, they decided to risk travel and international flights. Their visit inspired us to return to some seasonal family traditions we had skipped last year because of the pandemic. The first of these was apple picking. We went a bit crazy picking a variety of apples. Over a month later and I we are still eating those same apples and I am still baking apple cobblers for dessert. I never thought I would get sick of apples but …

Our second son turned 16 in early October. What he wanted to do was take his two best friends to Shady Brook Farm to hang out and eat fair food. We all went together and then we set him and his friends loose to do whatever they wanted while we did the visited the Halloween themed barns, found our way around the corn maze, and visited the pumpkin patch. Mr Pict and our youngest son even took a ride in the monster truck hearse.

My in-laws wanted some time at the shore while they were in the US so they rented a beach property in Lewes, Delaware, for a week. We went down to stay with them for the weekend and properly explore Lewes, having only dipped in there before. We took a wander around the historic town centre. I enjoyed seeing all of the vintage architecture. Even my kids enjoyed seeing a cannonball from the War of 1812 still lodged in the side of the building that now serves as the town’s maritime museum. We took a stroll past the lightship Overfalls and played draughts (checkers) on the waterfront. I also managed to meet up with a friend who moved to Lewes over the Summer.

My in-laws celebrated their Golden Wedding Anniversary at the end of their visit with us. We went for an elegant and delicious brunch at the William Penn Inn.

Finally, in the last weekend of October, we took a flying visit up to Rochester to visit our oldest son. He had attended the open day on his own – the weekend before we went into lockdown in 2020 – and my husband had dropped him off in August so this was actually my first time visiting the RIT campus. Our son took us on a tour of the campus and to his dorm room. He is actually sharing with one of his best friends from High School so that worked out perfectly. He seems very happy and settled there and it was reassuring for me to see with my own eyes how comfortable and confident he is and how successfully he is managing everything.

It was cold and rainy while we were in Rochester so, in search of something indoors to do, we went to the Strong Play Museum. It was a terrific museum focused on the history of games and my kids would have had an absolute blast there when they were younger. There were lots of interactive exhibits, indoor playgrounds, and even a miniature supermarket. With our kids all being much older than the target demographic, we spent most of our time on the upper floor which was focused on board games and video and computer games. We are a big board gaming family with an extensive collection and Mr Pict and the boys all love computer games so we all found it pretty engaging. It is always amusing and mildly disconcerting to see things from our own childhoods now being curated in museums as vintage and classic items and there were abundant cases of that in this museum.

It was so lovely to have all six of us together again and the perfect way to round out a very busy couple of months. I am now looking forward to things slowing down and getting quieter for the remainder of the year.

We have had such a momentously busy summer as a family that we were tempted to just let Labor Day weekend be a sludgy three day break of chilling and preparing for returning to school and work.  Obviously Mr Pict has worked throughout the summer months but the kids and I have been footloose and fancy free for the most part which means big adjustments and transitions.  So the plan was just to stay home, sort things out on the home front, prepare for the school year, and relax.  However, we could not let Summer depart without one last trip to bid it farewell.

We, therefore, decided to go fruit picking.  It is peach season here.  I adore peaches and scoff loads of them every season.  We have, therefore, established a new tradition since emigrating which involves going peach picking each year and then making all manner of peach desserts – in addition to eating them fresh.  Honeycrisp apples were also in season at the orchard.  I had to have some.  I had never had a honeycrisp apple before we moved to the US.  Indeed, a quick google tells me that it is a variety that was developed in Minnesota and has only been available for public consumption since 1991 so it is a fairly new variety.  I love them.  I was always someone who ate green apples as I like my apples to be a little tart and definitely firm.  I rarely ever ate red apples because I hate the floury, powdery texture that so many of them possess.  Honeycrisps are like the best of both worlds – firm and the right balance between tart and sweet.  So juicy too.  Yum.  But also very expensive when bought in grocery stores.  They are so expensive, in fact, that I rarely ever treat myself to honeycrisp apples as I cannot justify the chunk of our food budget.  My in-laws actually gifted me a box of honeycrisp apples for Christmas last year.  At the orchard, however, the apples were a fifth of the per pound price it would cost me in the store.  Yes! 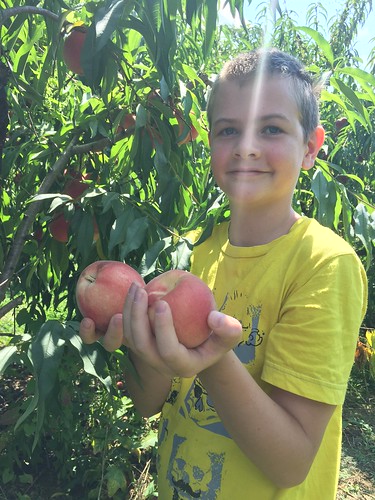 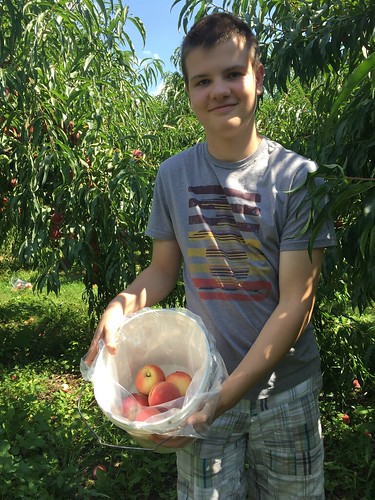 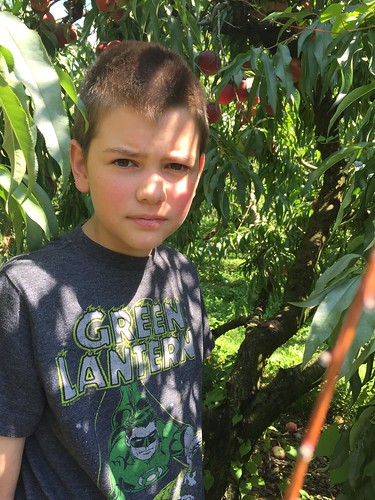 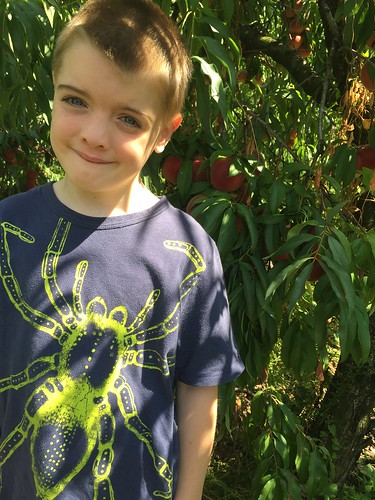 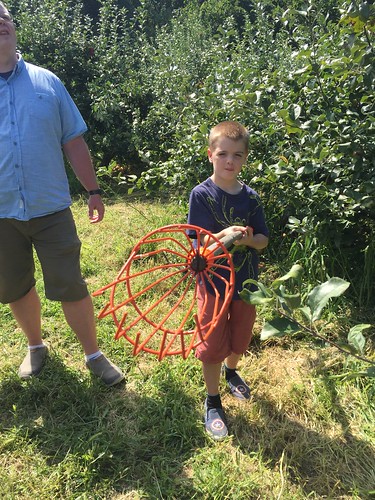 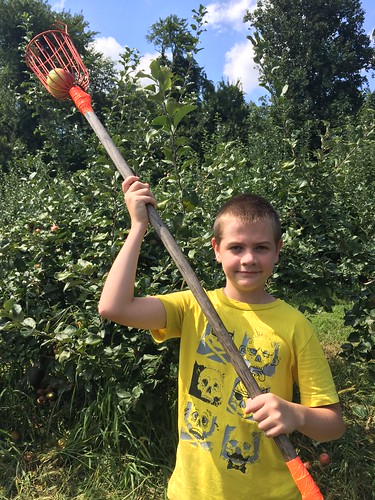 So we picked peaches and honeycrisp apples until we had full pails of each.  It was the perfect way to round of the summer – picking fresh fruit and baking cosy desserts. 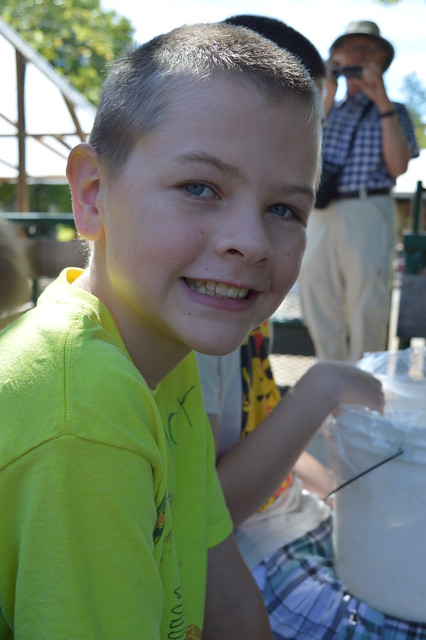 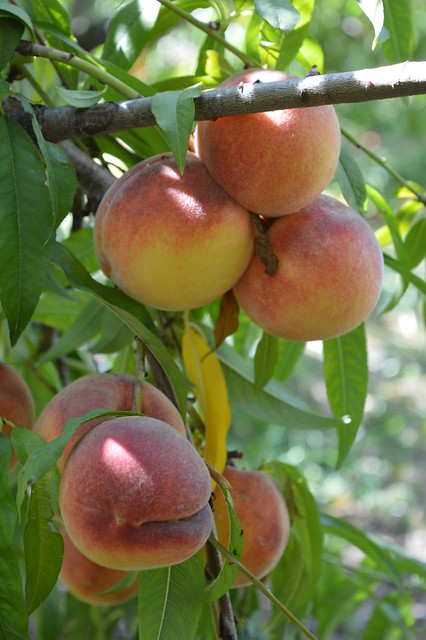 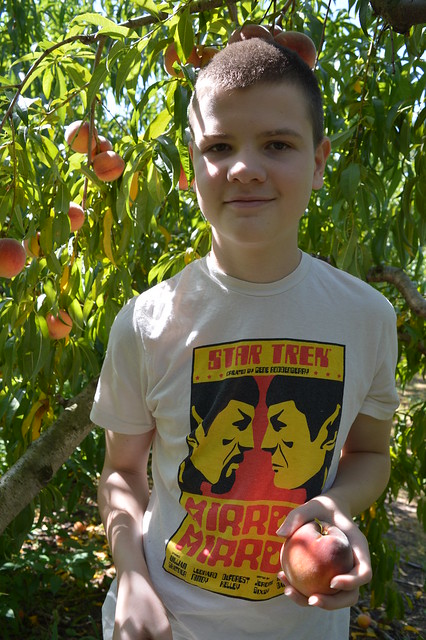 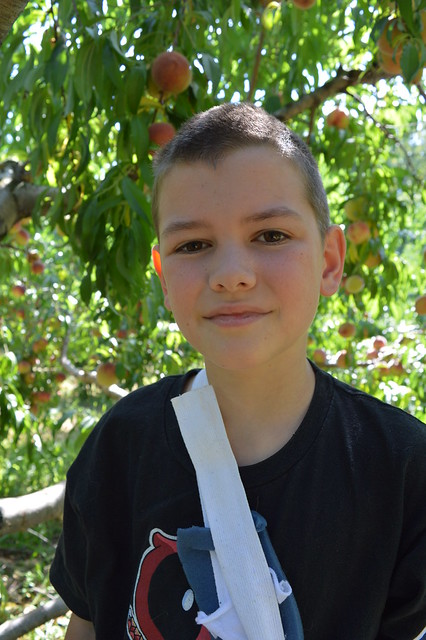 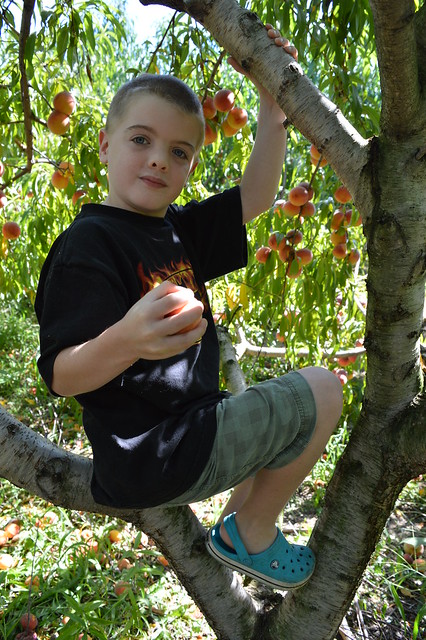 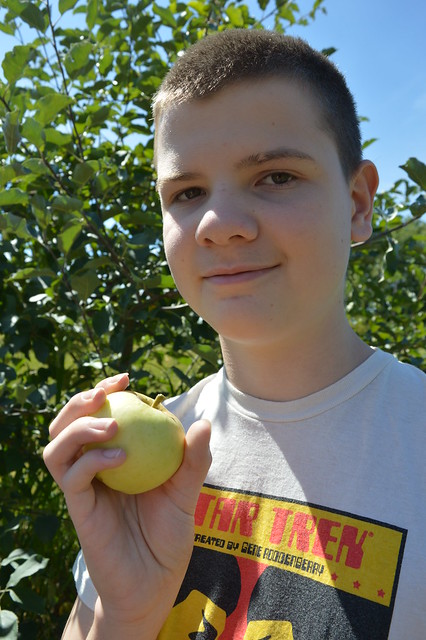 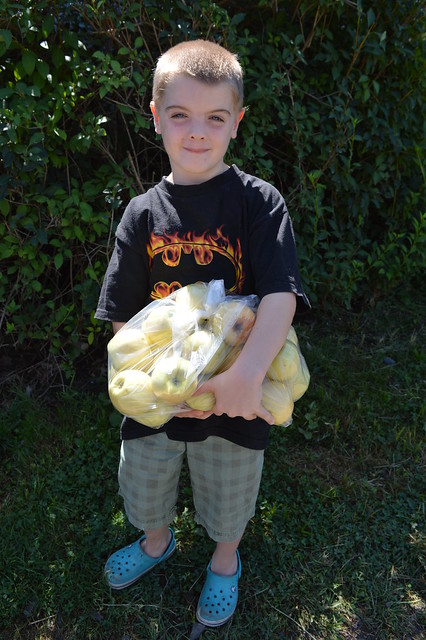